The Law Society of Upper Canada expresses grave concerns regarding human rights violations against members of the legal profession across the globe.

Lawyers should be able to exercise their legitimate duties without fear for their lives, for their liberty or for their security. The Law Society of Upper Canada urges all governments to comply with international human rights laws, including the United Nations’ Basic Principles on the Role of Lawyers.

The Human Rights Monitoring Group is a group of benchers of the Law Society of Upper Canada appointed by the Law Society’s governing body to monitor human rights violations that target members of the legal profession and the judiciary as a result of the discharge of their legitimate professional duties.

Day of the Endangered Lawyer

Description:
Join us on January 24, 2018, the Day of the Endangered Lawyer, for a panel discussing international principles that govern both lawyers’ and judges’ roles in upholding the rule of law. The panel will examine violations of those standards including: harassment, threats, governmental supervision, imprisonment, and, in some cases, targeted killing of lawyers and judges. Experts on Kenya, Egypt, and Vietnam will discuss the experiences of lawyers in each of these countries and discuss what we can do to better understand the dangers that lawyers face and assist them in their work.

January 24 is the Day of the Endangered Lawyer. Join us for a discussion on the international principles that govern both lawyers’ and judges’ roles in upholding the rule of law. https://t.co/siATR39iVu pic.twitter.com/yagX5zvmED 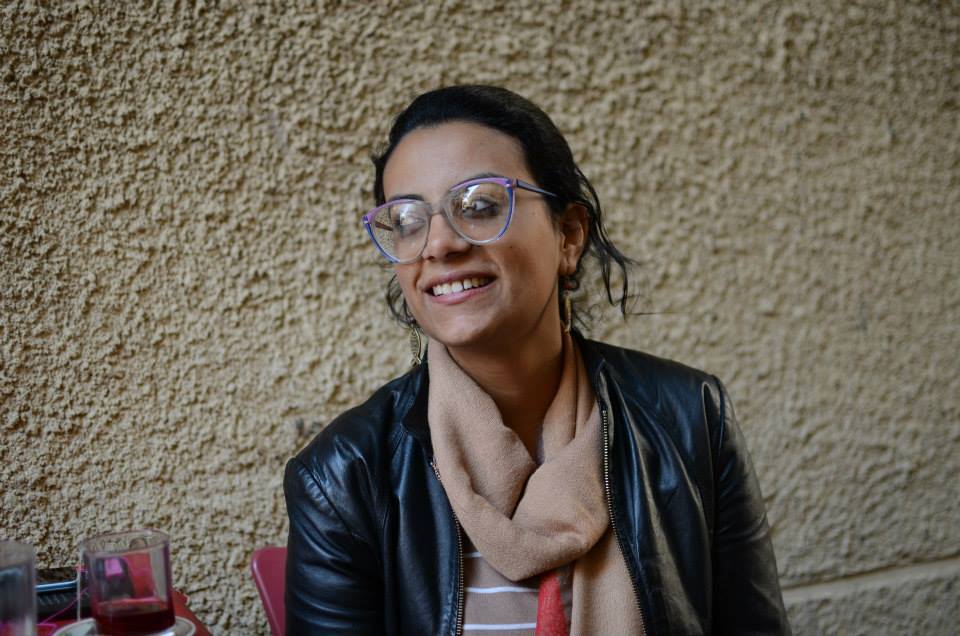 Three other defendants, Bread and Freedom Party members Asmaa Naeem and Zeyad Aboul Fadl, as well as Walid al-Emary, a lawyer and member of the Dostour Party, were sentenced to three years in absentia in the same case.

The case is related to a protest that took place on June 14 in the Alexandrian neighborhood of Miami against the ratification of the maritime border agreement in which Egypt ceded sovereignty of two Red Sea islands, Tiran and Sanafir, to Saudi Arabia.

While no protesters were arrested at the time, several lawyers and activists found out by chance that legal action had been taken against them when they were referred to court in July.

The five defendants learned that they faced charges of assembly, protesting without a permit, threat of force and insulting the president.

Massry previously served one year and three months in prison on charges of assaulting police officers in relation to a March 2013 protest, and was released in August of last year. She was detained in 2014 as well in relation to a protest that was held outside the Alexandria courts complex in December 2013.

A judge in Peru who ordered the jailing of two ex-presidents over the Odebrecht corruption scandal is being sidelined as part of a reform of the country’s judicial system that has ignited a new wave of controversy.

Richard Concepcion Carhuancho, celebrated for his tough stance on corruption, now finds his future as a top criminal judge in doubt under the new law.

The law, he said, represents “a loss of confidence, not only in me but in all the judges of the National Criminal Court that fight against corruption,” he said.

The head of Peru’s top court, Duberli Rodriguez, denied Thursday that the aim was to remove Concepcion from high-profile cases but warned that if he does not accept the new rules, he will be “in contempt.”

Rodriguez insisted the changes “will not affect cases linked to Odebrecht,” the Brazilian contractor at the center of a string of major corruption cases in Peru and elsewhere in Latin America.

President Pedro Pablo Kuczynski himself narrowly survived impeachment by Congress last week over allegations he lied about his links to the firm.

More than two decades after the deadliest bombing in Argentina’s history, the details of the unresolved massacre are only becoming more mysterious.

Argentine prosecutor Alberto Nisman was found dead just hours before he was set to testify against former President Cristina Fernández in early 2015. His death, which triggered an avalanche of conspiracy theories, was initially labeled a suicide. But a federal judge ruled this week that Nisman was murdered.

“The death of Prosecutor Nisman was not a suicide, and was brought about by a third party and in a painful manner,” said federal judge Julián Ercolini.

Nisman had been leading the investigation into the attack on a Jewish community center in Buenos Aires, which killed 85 people and injured more than 300 in 1994. He was appointed to lead the terror probe in 2004, when few details in the case had been established.

After more than a decade of investigation, Nisman accused Fernández in January 2015 of covering up Iran’s alleged involvement in the bombing in a suspected attempt to boost trade with Tehran. He was discovered dead in his apartment from a gunshot wound to the head days later.

Judge Claudio Bonadio indicted Fernández earlier this month on treason charges stemming from Nisman’s probe, but she denies any wrongdoing. Now a senator, the former president has immunity from prosecution.

Bonadio has requested that her immunity be lifted. But Fernandez’s local and regional allies say she is being targeted in a “media and judicial hunt.” Bonadio has for years been under investigation for alleged corruption crimes including money laundering.

The Supreme Court (SC) on Wednesday took a critical view of lawyers’ strikes, terming it against the constitution and standards of professional conduct.

The bench remarked this while hearing a bail application moved by accused Waqas, who was booked in a case in June 2016, but due to strikes, the case lingered on.

Justice Qazi said, “There is no concept of a strike in Islam,” adding that this way, counsels also neglect the constitution when they boycott their appearance before the courts.

“When I was Balochistan’s chief justice, there was not a single day lawyers were on strike. For me, I feel salary for the day of strike is Haram as I [ended up] doing nothing on that day,” he added.

Some five years ago my friend Wang Quanzhang – China’s last missing lawyer – came over to my Beijing apartment for a Swedish-style Christmas.

By this time he had learned to tolerate, if not appreciate, the meatballs, as it was his second Christmas at my house. Since then, I’ve been deported from China and banned for ten years under the Espionage Act.

I am unlikely to spend any more Christmases in China. Wang might never be allowed to spend any Christmas anywhere, outside of prison.

Wang disappeared on 5 August 2015. For two and a half years his family, wife Li Wenzu and their young son, and the lawyers Wang had chosen for himself should he ever be detained, have not seen nor heard from him. There’s no trial in sight.

It may strike anyone reading this that his case is simply another victim’s story. Frankly, there are so many that it’s hard to keep track or become engaged.

However, his case represents something far worse, and is a window into the new China envisioned by Xi Jinping and the CCP.

China’s attempts to weaken UN mechanisms put in place to monitor how countries implement or follow basic rules and rights are well documented. What is happening in China now – an unprecedented disappearing of critics, lawyers and human rights defenders, goes far beyond being just another crackdown on civil society.

It is another step towards weakening a core part of the international law system.

China: US and Germany call for release of Chinese activist ‘Super Vulgar Butcher’ 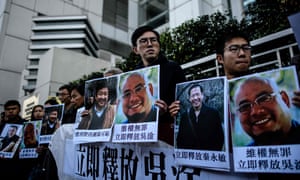 The United States and Germany have called for China to release a prominent human rights activist who was jailed this week for eight years on subversion charges, in a rare rebuke that called on the government to view dissidents as partners rather than enemies.

The two countries were “deeply disappointed” by the sentence of Wu Gan, better known by his online nom de plume “Super Vulgar Butcher”, according to a joint statement by the US and German embassies in Beijing. Wu’s sentence was the harshest in a spate of politically motivated trails targeting civil rights lawyers and activists. 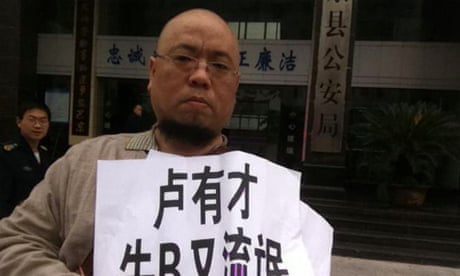 Another prominent attorney, Xie Yang, was tried on Tuesday but was not given any punishment after he retracted claims he has been tortured in custody.

“As Xie has been exempted from punishment, we urge China to allow Xie to resume his professional activities without preconditions and be free of any restrictions,” the US and Germany said. 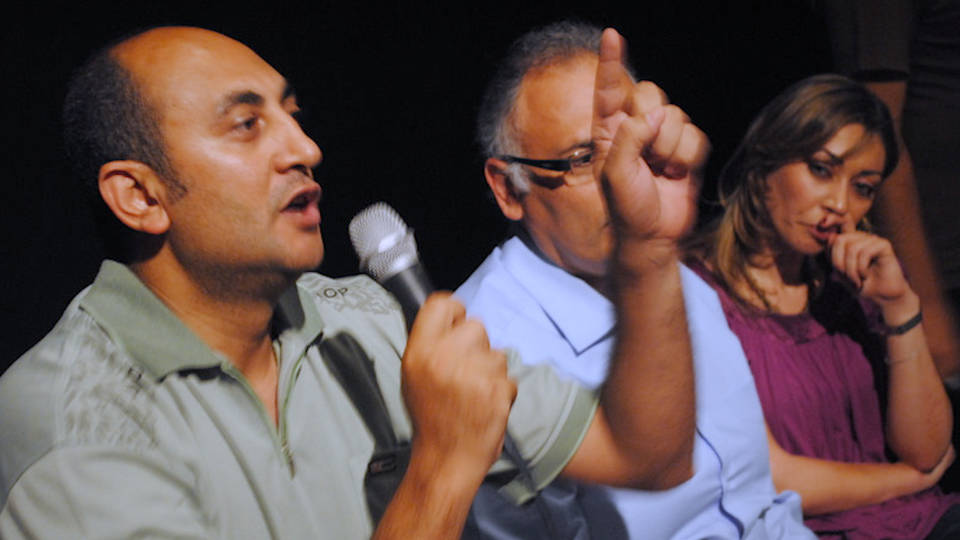 Meanwhile, in more news from Egypt, labor lawyer Khaled Ali has announced his intention to run for president, pitting the left activist against authoritarian Egyptian President Abdel Fattah el-Sisi. Khaled Ali was among the labor leaders who helped support nationwide strikes in Egypt in 2011 amid the uprising that toppled former military dictator Hosni Mubarak. This is Ali, speaking in a Democracy Now! interview in 2011.

Khaled Ali: “The workers have successfully launched and sustained the largest wave of labor mobilizations this county has seen, from 2004 until 2011. The workers are the ones who brought down the structures of this regime in the past years. Workers laid the ground for the emergence of this revolution, and I believe that any analysis which says otherwise is superficial.”