A Bangladeshi human rights lawyer on Wednesday said he sought police protection after complaining about death threats received for writing about and advocating for his country’s LGBT community.

Shahanur Islam Saikot said unidentified men, whom he suspected were militants, repeatedly threatened him over the phone, with the latest two calls made on Nov. 9. The death threats, including ones sent on Facebook, began in October.

“On Oct. 19 and 23, some unidentified callers threatened to kill me if I did not stop writing in favor of the LGBT people in Bangladesh. They tagged me as an atheist and reminded me of dire consequences,” Saikot, a blogger and 2010 fellow of Switzerland-based rights group JusticeMakers, told BenarNews.

The South Asian nation is where Muslim extremists carried out a spate of grisly killings targeting secular writers, intellectuals and LGBT activists in 2015 and 2016, according to Bangladeshi police.

“I have been getting repeated threats on Facebook where I share my story in favor of the LGBT community,” he said. “Who would threaten me on this issue other than the militants? The militants are behind the threats.”

Homosexual acts are outlawed in Saikot’s Muslim-majority country. Defendants can be sentenced to life in prison if found guilty of sodomy, but the law is not seriously enforced, according to a 2016 U.S. State Department country report on human rights in Bangladesh.

Saikot said he filed a complaint with the police on Oct. 27 in northern Naogaon district, where he was when he received one of the threats over his phone.

Today, the ICJ expressed concern at the allegations of harassment of lawyer Shamil Magomedov following an acquittal of his client Sulntankhan Ibragimov, who had been accused of murder.

The allegations should be investigated and authorities must make clear to law enforcement officials that such intimidation and harassment is prohibited, the ICJ said.

Yesterday, the lawyer alleged that on 19 October, while he was in Moscow, a law enforcement officer visited his home in Dagestan and questioned his family members about his whereabouts and “why he complained so much to law enforcement bodies”.

The lawyer believes this is related to the acquittal of his client, Sulntankhan Ibragimov, in whose case a decision had been delivered three days before.

When the matter was raised in court, Prosecutor Magomed Aliyev claimed the law enforcement officer’s visit was routine.

The ICJ considers that in the circumstances, the visit to and questioning by a law enforcement officer of a lawyer’s family about his professional activities could only reasonably be understood as a form of intimidation or harassment.

India: *UPHOLD NEMO JUDEX CAUSA SUA IN ALL MATTERS INCLUDING ONES WHERE SC JUDGES ARE INVOLVED!* *IN SOLIDARITY WITH THE PEOPLE’S LAWYERS WHO HAVE REQUESTED AN IMPARTIAL PROBE INTO THE CHARGE OF BRIBERY OF THE JUDICIARY!*

On 19th September 2017, the CBI registered an FIR to the effect that a criminal conspiracy was hatched by several people including one retired Judge of the Orissa High Court and officers of an Education Trust, to bribe and influence judges of the High Court and Supreme Court and secure favourable orders in the cases of the education trust pertaining to a recognition of a medical college run by them, whose recognition had been denied by the MCI citing many deficiencies. Immediately after registration of the FIR, raids were conducted and reports suggested that about 2 crores in cash were recovered from the conspirators. Some of them, including the retired High Court Justice came to be arrested. However after these persons secured bail, no further effort was made by the CBI to challenge their bail and nothing was known about the progress of the investigation.

In these circumstances that Campaign for Judicial Accountability and Reforms (CJAR), filed a writ petition, seeking an impartial court monitored investigation in this case of alleged bribery of the Judiciary. The petitioners held that as investigation involves direct allegations of corruption at the highest levels of the judiciary, any investigation by an agency like the CBI controlled by the government, could compromise the independence of the judiciary. In fact the present CJI was presiding over the bench which was handling the medical educational institution cases in the Supreme Court when the alleged bribery took place.

The petition was mentioned on 9th November before the court where such mentionings are taken up for urgent listing and also because it would not be appropriate for the Chief Justice to deal with this matter in his judicial and administrative capacity, although in ordinary routine matters the listing of cases is done by the CJI. On mentioning, the J. Chelameswar’s bench ordered it to be listed before him on 10th November. However during lunch the petitioners counsel Advocate Prashant Bhushan was informed by the Registry that by an order of the CJI the petition case was assigned to another bench.

Meanwhile another petition on this matter represented by Advocate Ms. Kamini Jaiswal was mentioned and ordered to be taken up. The bench of Justice Chelameswar and Justice Nazeer passed an order on 9th November directing that in view of the importance and sensitivity of the matter, this matter to be listed for hearing before a bench of the 5 senior most judges of the Supreme Court and the material collected by the CBI be sealed and placed before a Constitution Bench on 13th November when the matter comes up for hearing. Once again an administrative note issued by the CJI was handed over to Justice Chelameswar’s bench, across the bar, by a registrar in the course of hearing.

*Clear violation of nemo judex causa sua*
In both the matters, the CJI acted in a manner that violated the basic principle of any decision-making authority- nemo judex causa sua (no one shall be a judge in his or her own case). If the CJI had simply allowed the order passed by his collegue Justice to continue the minor procedural irregularity of having directly referred the matter to a Constitution Bench could have been condoned. However, by acting in such a manner, he has seems to have undermined the credibility of the Supreme Court and the office of the CJI. It has increased the doubts about his culpability in the offence in the eyes of a neutral and impartial observer.

Further to make matters worse, on 10th November at 2:45pm, Advocate Prashant Bhushan received a call from the registry that a seven judge bench is being constituted to sit 3pm and that he should come to court. A list setting out the constitution of the 7 judges bench was posted on the notice board but when Mr. Prashant Bhushan entered the court, to his surprise there was a bench of 5 hand picked junior judges, presided by the Chief Justice, as opposed to the order dated 9th November 2017 by the Division Bench of Justice Chelameswar and Justice Nazeer. The hearing began to a full court where the Additional Solicitor General, office bearers of the Supreme Court Bar Association and other lawyers who were not parties were allowed to say things against the order of the division Bench and as the hearing progressed, the atmosphere became chaotic with sloganeering. The Counsels for the petitioners Prashant Bhushan and Dushyant Dave were neither called upon nor permitted to put forward their case and there was a constant cry for hauling them, along with the others who have taken up this issue, for contempt. Ultimately Prashant Bhushan was forced to leave the court with the marshalls escorting him. The Constitution bench then proceeded to annul the order of the division bench.

The Indian Association of People’s Lawyers (IAPL) expresses its utmost displeasure at the way at which the CJI has addressed the issue of allegations of bribery of the judiciary. The events in the hearing of the abovementioned proceedings and especially on 10th November show a clear violation of basic principle of jurisprudence by the Higher Judiciary especially in dealing with sensitive matters where the credibility of the Higher Judiciary is involved. On the other hand, IAPL also condemns the way in which the lawyers raising the issue of corruption of the judiciary were booed, ridiculed, humiliated and threatened with contempt. This is similar to the silencing of whistleblowers that the judiciary in other matters is so keen to act on. IAPL extends its solidarity with such lawyers and urges all to be ever vigilant regarding cases of alleged corruption of the Judiciary and strive for the independence of the judiciary especially from the influence of money and political power. 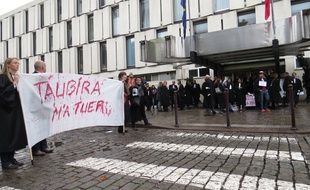 The CCBE 2017 Human Rights Award – 11st ed. – goes to Zaza Khatiashvili for his outstanding work in support of persecuted lawyers in Georgia pic.twitter.com/PhWFnKaZ5l

The Philippines: NUPL: Murder of Bicol paralegal linked to attacks on rights lawyer

USA: Lawyer shot to death on front porch after walking kids to school

A prominent Kansas City lawyer was shot dead on his front porch moments after he walked his children to school, authorities said.

Police identified the man as 39-year-old Thomas Pickert, a personal injury lawyer.  On Wednesday, Pickert’s wife reportedly heard a gunshot and found her husband dead outside their home.

KCTV reports that a white van seen speeding away from the shooting scene was registered to David Jungerman, a local businessman who had recently been ordered to pay Pickert’s client more than $5 million.  Police found the unoccupied van in a nearby town hours after the shooting.

Detectives interviewed Jungerman and said Thursday that he is neither a suspect nor person of interest in Pickert’s death.

Pickert was a medical malpractice attorney with his own law firm. This summer, Pickert represented Jeffrey Harris, a homeless man who sued Jungerman over a shooting that caused the man to have part of his leg amputated.

Harris’ legal team said Jungerman grabbed an AK-47 and handgun and headed to his property without calling police. Then, without warning, shot Harris in the back of the leg.

Police yesterday arrested aspiring Mt Pleasant independent candidate Fadzai Mahere at a soccer tournament she had organised as part of her campaign activities in the constituency.

She was picked by police at Groombridge Primary School where her Shanduko soccer tournament was being hosted.

Although police were not immediately available for comment, one of her campaign team members Nyasha Musandu said Mahere was at the Harare Central Police Station at the time of going to print .

“Right now she hasn’t been charged, so we don’t know the reason why they picked her,” Musandu said.

South African human rights lawyer Sibongile Ndashe and two others who were arrested and detained in Tanzania 10 days ago have been deported on Friday evening.

They were arrested for ‘promoting homosexuality’ at a hotel in Dar es Salaam. Same-sex relations are illegal in the east African country.

Ndashe was released on bail on Thursday and told to report to the police station on Friday.

Senior lawyer at the Initiative for Strategic Litigation in Africa (ISLA), Matilda Lasseko, told News24 that their deportation is proof that there were no real charges against them, and that the unlawful week-long detention without reason was just a form of harassment.

Lasseko said of those arrested, two were South Africans – one was based in Uganda, while the others are from Tanzania. Lasseko confirmed that the others were released on Friday as well.

ISLA will host a press conference at their offices on Saturday on the wrongful arrests and arbitrary detention.