Vocal human rights lawyer Siti Kasim has pleaded with Malaysians to stand with her and speak out against creeping extremism in the country’s religious institutions.

In a 5.47-minute video posted on her Facebook page as well as uploaded on YouTube last night, Siti urged Muslim and non-Muslim citizens to “take a further step” to address the “clear and present danger to our society” after an Islamic preacher was caught criticising a royal decree against a Muslim-only laundry and denigrating ethnic Chinese as “impure”.

“Is it only me or does anyone else feel this dread of extremism covering over our beloved Malaysia these days?” she asked at the start of the clip.

“It seems the extremists and radicals are everywhere these days stopping at nothing to have others bow to their demands and take the rights of others away,” she continued, and listed as examples the recent successful objections for non-Muslims to hold events with alcohol, the past numerous arrests of Muslims from the Ahmadiyyah denomination and the ban against a book titled Islam Without Extremes.
Read more at http://www.themalaymailonline.com/malaysia/article/stand-with-me-against-radical-preachers-siti-kasim-tells-malaysians-video#k1Cjp4xdk60UF6zs.99 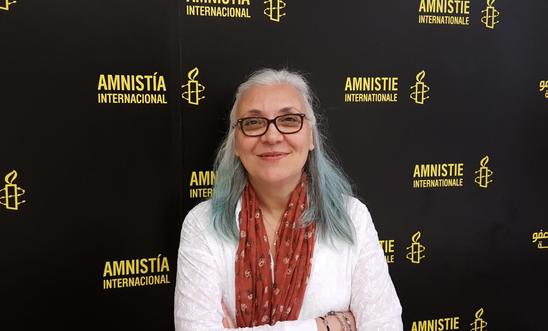 One hundred days after their wrongful arrest, Amnesty International is leading a global demand for the immediate and unconditional release of 11 prominent human rights defenders in Turkey.

Ten activists, including İdil Eser, the Director of Amnesty Turkey, were arrested on 5 July whilst Amnesty International’s Turkey Chair, Taner Kılıç, was arrested a month earlier. On 4 October a prosecutor filed an indictment calling for jail terms of up to 15 years for all 11 human rights defenders on absurd and trumped up terrorism charges.

“One hundred days ago our colleagues were locked up for standing up for human rights. Every passing day further exposes the long reach of the post-coup crackdown and the deep flaws in Turkey’s justice system,” said John Dalhuisen, Amnesty International’s Europe Director.

“The indictment is a toxic mix of innuendo and untruth which does not stand up to the slightest scrutiny. It repeats ludicrous and contradictory allegations which have no place in any self-respecting courtroom.”

After three months the investigation has unsurprisingly failed to provide any incriminating evidence to substantiate the prosecutor’s fantastical charges. Nor has it shown how the supposedly secret ‘Buyukadameeting’ relates to terrorism in any way.

The campaign for the release of imprisoned French-Palestinian lawyer and human rights defender Salah Hamouri has continued to expand. Elsa Lefort, Hamouri’s wife and the spokesperson for his support committee, has continued to speak at events and actions across the country as well as meeting with French diplomatic officials to push for meaningful French action to demand Hamouri’s release. He is currently held without charge or trial under a six-month administrative detention order after he was seized from his home near Jerusalem by Israeli occupation forces, who invaded his house in an armed pre-dawn raid.

Hamouri is a field researcher for Addameer Prisoner Support and Human Rights Association and a newly graduated lawyer who passed the Palestinian bar examination only three days before he was seized by Israeli occupation forces on 23 August. He is a Jerusalemite Palestinian and former political prisoner who was jailed for nearly seven years before being released in the Wafa al-Ahrar prisoner exchange and has been an international spokesperson on the issue of Palestinian prisoners.

Elsa Lefort, Jean-Claude Lefort and Maitre Berenger Tourne, Hamouri’s French lawyer, met on 9 October with a diplomatic advisor to French president Emmanuel Macron, pushing for meaningful action to free Hamouri from administrative detention, where he is held on secret evidence without charge or trial on an indefinitely renewable term.

“As with every French citizen, Salam Hamouri must be able to benefit from the protection and support that the French State grants to its citizens and residents. Beyond consular protection, the French Republic must also take a position in this case against the arbitrary detention of Salah Hamouri and the harassment to which he and his family are subjected,” said the Support Committee.

Advocates boycotted duty on Wednesday protesting against the attack on a woman advocate Bayana Ramani at her residence in Kothapeta under Two Town police station limits. The lawyers under the auspices of Bezawada Bar Association boycotted duty and took out a rally from Bar Association to Beasant Road and came back to Civil Courts.

They said every person has right to engage lawyer and fight a legal battle. They said it is wrong to physically attack the advocates. They demanded that a case of attempt to murder be booked against the accused rowdy sheeter Banka Siva and his associates for attacking lawyer on Tuesday. The female lawyer is recovering from injuries.

https://www.ibanet.org/Committees/Divisions/Legal_Practice/IBA-Human-Rights-Award.aspx (ENGLISH – The Award will be given October 13, 2017 in Sydney)

Authorities in the central Chinese province of Hubei on Wednesday questioned the wife of ‘disappeared’ human rights lawyer Wang Quanzhang, amid an ongoing operation targeting rights lawyers and their families nationwide.

“Three people came this morning saying that they were employees of the residential compound, and that we had to register,” Li said. “Then they took away my household registration book.”

“They wanted to see who was living in my home now, and they started secretly filming from the moment they got inside the door,” she said.

“A few minutes later, four police officers came along, without any paperwork at all or showing me any ID, nor would they tell me their police numbers,” she said.

“They said someone had called the police and they were acting on the basis of a tip-off, but they left after I’d argued with them for a while,” Li said.

Li said she has been under close surveillance by police since she arrived back in her hometown in Hubei on Oct. 1.

Wang Quangzhang has been held at an unknown location without trial or access to a family-appointed lawyer or family visits for more than two years after being detained in a nationwide July 2015 police operation targeting rights lawyers and associated activists.

Turkey: Amnesty calls on Turkey to release human rights defenders on 100th day of their arrest

Amnesty International (AI) on Wednesday called on the Turkish government for the immediate andunconditional release of 11 prominent human rights defenders, including its Turkey director İdil Eser, who has been in pretrial detention for 100 days on terrorism charges.

In a press release issued on Wednesday, John Dalhuisen, Amnesty International’s Europe director, said: “One hundred days ago our colleagues were locked up for standing up for human rights. Every passing day further exposes the long reach of the post-coup crackdown and the deep flaws in Turkey’s justice system.”

Underlining that the accusations faced by the 11 activists are baseless, Dalhuisen said: “The indictment is a toxic mix of innuendo and untruth which does not stand up to the slightest scrutiny. It repeats ludicrous and contradictory allegations which have no place in any self-respecting courtroom.”

Ten activists, including Eser, were detained on July 5 during a workshop at a hotel on İstanbul’s Büyükada and were put in pretrial detention by an İstanbul court on July 18 on charges of “abetting a terrorist organization.”

On Oct. 4 a prosecutor filed an indictment calling for jail terms of up to 15 years for all 11 human rights defenders.