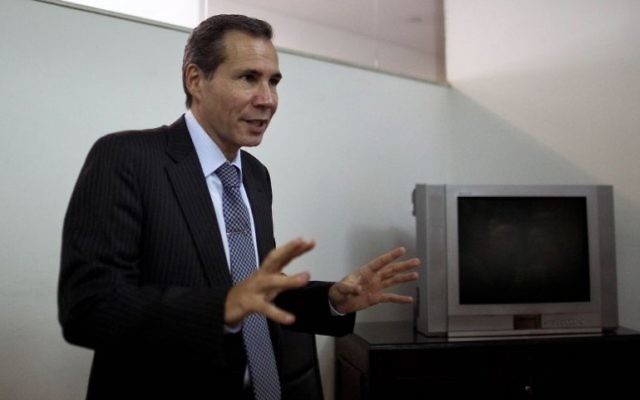 A team of investigators in Argentina has reportedly determined that Alberto Nisman, the special prosecutor who investigated the Iran-ordered 1994 AMIA Jewish center bombing in Buenos Aires, was murdered and did not commit suicide as claimed by the defense, according to a Spanish-language report Thursday.

Twenty-eight experts in different areas, from ballistics to psychology, determined that Nisman was murdered by a shot to the head, and that the murderer (or murderers) then attempted to cover their tracks at the scene of the crime, according to a report in the Argentine news site Infobae.

Argentinian officials have has not confirmed the report, which comes just days after Israeli Prime Minister Benjamin Netanyahu made the first-ever visit by an Israeli premier to Argentina.

Netanyahu brought the issue up in his talks with Argentinean President Mauricio Macri. Israeli officials were told Monday that the investigation was advancing, and that they can expect an official announcement soon. Officials in the prime minister’s delegation said that the timing of the Thursday report was coincidental.

Nisman was discovered shot dead in his apartment in January 2015, hours before he was scheduled to appear in Congress. Nisman had been about to present allegations that then-president Cristina Fernandez de Kirchner orchestrated a secret deal to cover up Iranian officials’ role in the AMIA bombing. Kirchner denied the allegations and judges threw out the case. 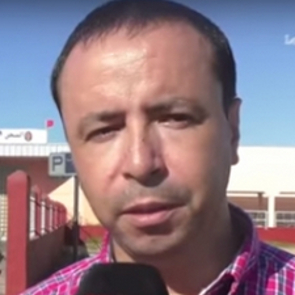 Human rights defender and lawyer Abdessadeq El Bouchtaoui has been summoned for interrogation by Moroccan authorities. He will have to appear on 18 September 2017 at 10.00 am at Tétouan police station.

Abdessadeq El Bouchtaoui was summoned on 7 September 2017. He was told that he was being investigated in relation to his legal representation of Al-Hoceima activists. The human rights defender was previously interrogated on 11 August 2017 at Tétouan police station. He had received summons on 9 August during a court hearing visit with family members to request the retrieval of the body of Emad El-Attabi.

His summons and questioning follows his criticism on Facebook of the repression of Al-Hoceima protests, which were held in response to  a speech in which King Mohammed VI described those criticizing government development policies and protesters as “collaborating against the homeland”. The King responded to the protests stating that law enforcement agents were “showing restraint and commitment to the rule of law as they maintained security and stability.”

The Philippines: Leni warns Congress vs abusing power to impeach

Congress should not abuse its powers of impeachment to scare and intimidate the voices of the opposition, Vice President Leni Robredo said on Thursday.

“We hope that the impeachment process will not be abused,” Robredo said in an interview in Balangkayan Eastern Samar, a transcript of which was sent to Manila reporters.

She was reacting to the decision of the House justice committee finding one of two impeachment complaints against Supreme Court Chief Justice Maria Lourdes Sereno sufficient in form and substance, and proceeding with the hearing of charges against her.

The European Parliament (EP) has announced on Friday that the pro-Kurdish Peoples’ Democracy Party (HDP) leaders Selahattin Demirtaş and Figen Yüksekdaş, who were jailed by Turkish government of autocratic President Recep Tayyip Erdoğan, are among the nominees for its prestigious Sakharov Prize, awarded each year in the name of freedom of thought.

The European United Left-Nordic Green Left (GUE/NGL) has nominated Demirtaş and Yüksekdağ for the prize to honor their work in defending human rights and fundamental freedoms in Turkey, according to a statement on the EP’s website. If awarded the prize, Demirtas will become the fourth Kurdish Sakharov laureate since the honor was established in 1988.

Turkish government arrested Demirtas, the co-chairperson of the HDP, and the party’s former co-chair Figen Yüksekdağ in November 2016 as the Erdoğan regime has accused them of ‘terror-related’ crimes. Charges prosecutors brought against the two politicians throughout numerous trials have ranged from insulting Erdoğan, collaborating with the outlawed Kurdistan Workers’ Party (PKK), to working to divide the Turkish state with their speeches and political rallies. Both face more than a combined 150 years of imprisonment from their numerous trials.

Police in Moscow have opened a criminal investigation on suspicion of “hooliganism” after a top campaign aide for opposition politician and anticorruption activist Aleksei Navalny was attacked by an unknown assailant wielding a metal pipe.

A Moscow police spokesman told Interfax on September 16 that the case had been opened and police were looking for the perpetrator who attacked Nikolai Lyaskin the previous day. Lyaskin is the head of the Moscow office of Navalny’s campaign for the 2018 presidential election.

Lyaskin suffered a concussion as a result of the attack and was treated at a hospital.

The incident was the latest in a string of assaults and other harassment of Navalny supporters around the country. Navalny himself suffered a chemical burn to his eye in April when an assailant splashed green antiseptic into his face.

Police closed the investigation into that incident in June without making an arrest.

The co-founder of Hong Kong’s Occupy movement Benny Tai Yiu-ting vowed not to retreat if he were jailed and lost his university teaching post, while calling for civil society to stay strong in an era of “sugar-coated authoritarianism”.

“The power of an authoritarian system lies in forcing people to accept their fate and obey through threats and lies,” Tai said in an exclusive interview with the Post. “We have to respond with no fear, expose their lies and stay persistent in our fight.”

The University of Hong Kong associate professor of law is expected to attend a pre-trial hearing on Tuesday. He and fellow Occupy Central co-founders Reverend Chu Yiu-ming and Chinese University associate professor of sociology Dr Chan Kin-man face three charges relating to public nuisance over their roles in the civil disobedience movement of 2014. Each charge carries a maximum sentence of seven years in prison.

Even before the trial, Tai has seen a campaign to remove him from his post, an effort he likened it to the Cultural Revolution. Pro-establishment lawmaker Junius Ho Kwan-yiu planned on Sunday to organise a rally pushing for his dismissal.

Amnesty International has called on Egypt to release 24 Nubian activists held in Cairo after they were arrested at a demonstration for greater recognition of their cultural rights. The activists were detained after the Egyptian authorities dispersed the demonstration violently in Aswan earlier this month; they are due in court today.

The detainees have called for the return of the Nubian homelands in the south of Egypt, as stipulated in the 2014 constitution. They also want greater official recognition of their indigenous rights after a succession of governments in Cairo have failed to protect the minority ethnic group.

Prawet was a legal representation for at least 2 Lese Majeste defendants. Prawet also actively expressed his political view on his facebook account. He was arrested by the military on 29 April 2017 and had been placed under military custody. Until 3 May 2017, Prawet was brought to the Criminal Court where the police filed a petition before the court to remand him in custody. The Court denied his request for bail.

As a lawyer, Prawate has represented clients accused of violating Article 112 (lese-majeste) in at least two cases, those of Da Torpedo and “Jakkrawut”. He once took a credit company to court for loaning money to villagers at high interest rates in breach of the law. Prawate is also known for regularly sharing his political views on Facebook.

Prawet was a legal representation for at least 2 Lese Majeste defendants. Prawet also actively expressed his political view on his facebook account. He was arrested by the military on 29 April 2017 and had been placed under military custody. The Court demied his request for bail