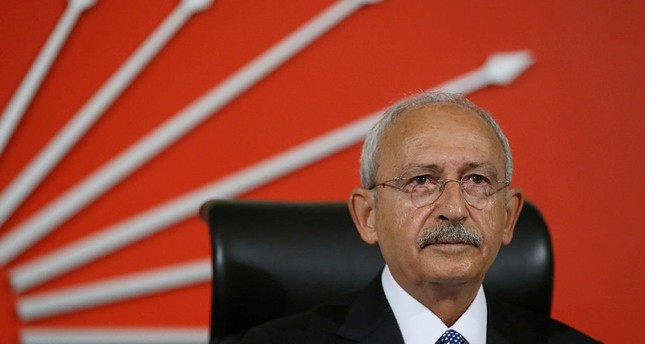 Main opposition Republican People’s Party (CHP) leader Kemal Kılıçdaroğlu’s lawyer Celal Çelik was detained on Friday in Ankara on charges of being a member of the Gülenist Terror Group (FETÖ). Çelik was apprehended in Ankara by an order of the Istanbul Prosecutor’s Office and will later be brought to Istanbul.

Investigations have revealed that he was in close communication with Fatih Gürsul, a former adviser to Kılıçdaroğlu, in early 2014 when the case known as the National Intelligence Organization (MİT) trucks took place. Gürsul, who is in jail pending the conclusion of his trial on membership of FETÖ, was revealed to have been in communication with known FETÖ members in the U.S. via Bylock, an encrypted communication application for smartphones used almost exclusively by FETÖ members. Gürsul forwarded Kılıçdaroğlu’s emails to his FETÖ superiors in the U.S. Gürsul, an academic at Istanbul University, was detained on Dec. 6, 2016 for FETÖ membership.

Gürsul is also accused of being in direct communication with senior FETÖ operative Süleyman Gürbüz, who is currently a fugitive.

The names are the latest additions to the rapidly expanding list of activists and journalists being subjected to trumped-up charges and travel bans.

During the course of a week, more than ten political and human rights activists have been summoned for interrogation by the public prosecutor.

On Wednesday, Jalila al-Salman was prevented from leaving Bahrain as she attempted to cross the causeway connecting the kingdom with neighboring Saudi Arabia.

Activists say the measures are designed to keep them away from international forums like the 36th session of the UN Human Rights Council (HRC), which runs between September 11 and September 29 in Geneva.

Jubilee MPs and senators are planning to trim the powers of the Judiciary over the Supreme Court’s ruling which annulled the victory of President Uhuru Kenyatta in the August 8 elections.

While the direct decision by Nyeri Town MP Ngunjiri Wambugu to file a petition seeking to kick out Chief Justice David Maraga may have caused discomfort among Jubilee leaders, the party’s lawmakers have vowed to take away the powers of the Supreme Court to overturn election outcomes of the presidential race.

The plan, legislators who are familiar with it say, will begin immediately they resume parliamentary sittings after the induction to familiarise new legislators with the rules of debate in the House, which will begin this Sunday.

Law students who graduated from Makerere University will be required to produce certified academic papers before enrolling for this year’s bar examinations in Kenya. The Council of Legal Education (CLE) Thursday released a notice to the law students after reports that the degree scam is being investigated by Uganda’s oldest and biggest university. Makerere is investigating degrees awarded since 2011 and this is likely to affect many Kenyans who studied at the university. Dr Damalie Naggitta-Musoke, the former dean of the School of Law at Makerere, is leading a team that is auditing results. Ugandan sources said up to 88 lecturers, administrators from the senate, and students named in the marks scam are being investigated. It emerged that the staff changed students’ marks at an average Kenyan fee of Sh8,000 and Sh40,000 million per unit depending on the course and status of the student. Back home, the ripple effect of the audit has started to bite, with law students being the first casualties.

Tanzanian firebrand opposition leader Tundu Lissu, who was shot by unknown gunmen in in Dar es Salaam last week, is still in critical but stable condition in hospital.

Chadema leader Freeman Mbowe, who visited Mr Lissu on Thursday, dismissed reports in a section of Tanzanian media that the life of the opposition party’s chief whip was in danger.

He said while the condition of the Singida MP has been fluctuating, he was on a recovery path, and that there was no cause for alarm.

Mr Lissu, he said, is able to speak and has been receiving visitors under strict conditions imposed on the hospital staff of The Nairobi Hospital.

Visitors, he said, had been limited because they want the lawmaker to have enough bed red as recommended by the medics.

Information reaching BaretaNews confirms that Common Law lawyers have been permitted by the colonial DO of Mamfe, Mochi Johnson Malafa, to hold a conclave in Mamfe, the chief town of Manyu county on Saturday 23rd September 2017. According to the document which BaretaNews obtained, the application was filed by Barristers, Njualem CHARLSE, Ebai Ntoko, and Nzo Mboke. The agenda of this conclave is not yet known to BaretaNews but we can only guess that it has something to do with the God ordained project for the restoration of Southern Cameroons statehood.

BaretaNews must say that Common Law Lawyers have been resolute and had set up the foundation for Southern Cameroons own Bar to be independent, and void of government influence in a free southern Cameroons. We can only thank God the Consortium leader,Sessekou Agbor Balla is around and may take up from where he left it. However, while waiting to see the agenda, we can only caution that our lawyers should be careful of the colonial manipulation so they don’t act like the church who for selfish interest has abandoned the sheep to the wolves. The people are watching.

LRWC calls upon Turkey to immediately and unconditionally release Didem Unsal and 17 other lawyers, who were arrested and detained on 12 September 2017. The timing of the arrests was only one day  before the lawyers were scheduled to defend Nuriye Gulmen and Semih Ozakca, who have been hunger striking in protest of Turkey’s ongoing repression of lawyers and educators. LRWC concludes that these arrests and detentions contravene Turkey’s international human rights law obligations to ensure lawyers can perform their duties, and to guarantee competent legal representation of choice for individuals facing criminal charges. The arrests of Didem Unsal and the 17 other lawyers is part of a sweeping crackdown against lawyers and human rights defenders in Turkey, which has included the arbitrary arrest and continued detention of Amnesty International Turkey’s Director, Idil Eser, and Chair, Taner Kiliç