L4L is concerned about the criminal charges pending against Malaysian lawyer Siti Kasim.

on 3 April 2016, the Federal Territories Islamic Department (JAWI) carried out a raid on a private event held by a group of members of the transgender community. Siti Kasim, a lawyer and human rights defender was present at this event in her capacity as lawyer and, in that capacity, questioned the legitimacy of the raid since the religious authorities conducted the raid without a warrant and were not accompanied by the police, as required under Malaysian law. She was subsequently arrested for “criminal intimidation” and “obstruction of a civil servant”. After having been released, Siti Kasim initiated civil proceedings for unlawful arrest. Shortly after doing so, she was informed that criminal charges would be brought against her for obstructing a civil servant. If convicted, Siti Kasim faces up to two years in prison, a maximum fine of RM10,000 (USD 2,331) or both.

L4L is concerned about the fact that Siti Kasim is being prosecuted for facts which amount to (and do not go beyond) the legitimate exercise of her duties as a lawyer. Moreover, the criminal prosecution of Siti Kasim appears to be connected to the fact that she initiated a civil action for unlawful arrest.

L4L expressed concern about the criminal prosecution of Siti Kasim in a letter to the authorities and will continue to monitor the situation.

“Creeping” impeachment that once led to the removal from office of a sitting president may no longer worry Supreme Court Chief Justice Ma. Lourdes Sereno and Commission on Elections Chairman Andres Bautista.

Contrary to the legal opinion aired by Mindoro Oriental Rep. Rey Umali, the impeachment cases may no longer be railroaded and elevated swiftly to the Senate even if 98 congressmen, comprising one third of the House membership, will endorse it prior to referral to the Committee on Justice that Umali chairs.

Asst. Minority Leader and ABS Partylist Rep. Eugene de Vera said the impeachment rules approved by the House of Representatives has gotten rid of a creeping impeachment schemes that may result to the removal from office of constitutional officials.

Umali has claimed that automatically sending the complaints to the Senate impeachment court remains a possibility if endorsers reach 98 for each complaint within a period of 30 days since filing.

However, De Vera cited Rule IV, Section 13 paragraph 2 of the impeachment rules specifically providing that an impeachment complaint/resolution, “must, at the time of filing, be verified and sworn to before the Secretary General” by congressmen constituting one third of the House membership.

“The word ‘must’ is mandatory. Hence, to automatically constitute into the Articles of Impeachment, the said 1/3 endorsement as verified and sworn to by the members should have been made at the time of filing before the Secretary General,” said De Vera, a lawyer.

Ortega, who was removed from her position earlier this month, said a week ago she had evidence that Maduro was involved in graft with construction company Odebrecht.

The 59-year-old Ortega has said she would give details of the corruption cases to authorities in the United States, Spain, Mexico, Brazil and Colombia.

Mexican attorney general Raul Cervantes met Ortega for around 10 minutes in Mexico City, an official at the attorney general’s office said. He gave no further details of the meeting and spoke on condition of anonymity.

Late on Thursday, Ortega posted a picture on Twitter of herself with Cervantes in Mexico, saying the two had met to “coordinate actions in the fight against corruption.”

Ortega says she has been persecuted by opponents in an effort to hide details of high-level corruption and that she has proof of it.

She was a key player in Venezuela’s government before breaking with it in March. Ortega left Venezuela for Colombia and traveled to Brazil to meet prosecutors last week.

Kenya: Why did Kenya’s Supreme Court annul the elections?

Democracy is a marathon, and Kenya just delivered one of the most decisive victories for African democracy in recent history. Marathons are, after all, our thing.

In a 4-2 decision, the Supreme Court determined that the recently concluded presidential election “was not conducted in accordance with the Constitution and … is invalid”.

In practical terms, this means that Kenyans will have a second presidential election within the next 60 days – expensive in terms of money and time, but worth it for a clear and decisive declaration that democracy in Kenya is maturing.

The August 8 vote was a deeply flawed election. Yet weighty assumptions at home and abroad about how democracy is supposed to work in Africa prevented many from seeing that.

Critics were accused of being spoilers or “perennial losers”. If they pointed out one of the many problems of the electoral process, they were labelled “tribalists”, or overly demanding. Apparently, African citizens should be happy about “good enough” elections and shouldn’t demand more. The public was told that credible elections are simply not for this part of the world. The eyes watching Kenya’s election were so focused on the prospect of violence that they were prepared to force a clearly problematic process onto Kenyans.

The ruling of the Supreme Court exposes how faulty this minimalist logic is. It underscores that what the elections commission, international observers and some international press wanted to write off as “irregularities” were actually significant procedural failures that undermined the core of Kenyan democracy. 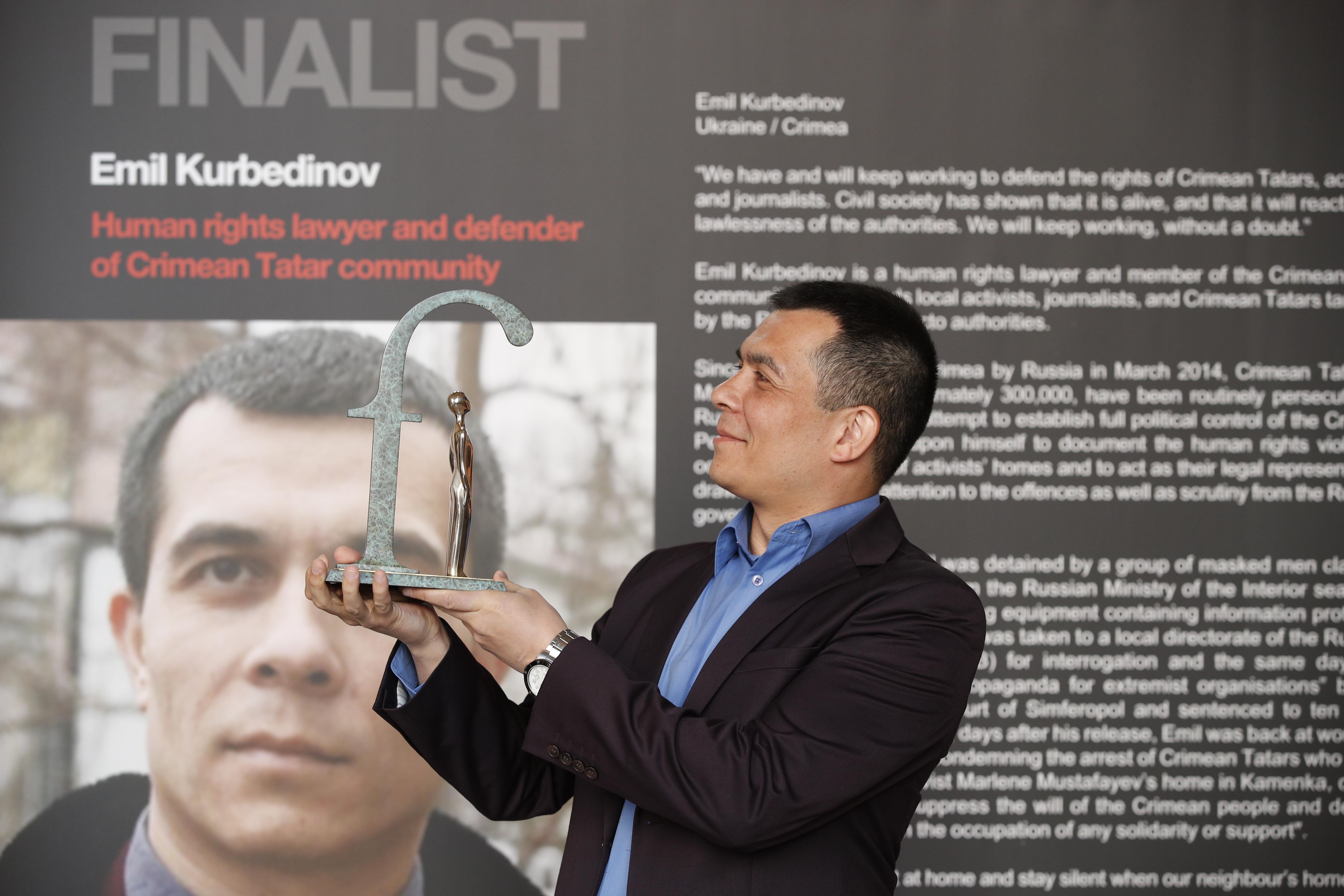 Defending human rights activists and political prisoners is some of the most dangerous work a lawyer can do in Crimea. After years taking on these risky cases, Crimean Tatar lawyer Emil Kurbedinov was awarded the Front Line Defenders Award for Human Rights Defenders at Risk on 26 May 2017 in a ceremony at City Hall in Dublin.

Emil Kurbedinov is a Crimean Tatar and human rights lawyer. Since the occupation of Crimea by the Russian Federation, Emil has been defending the persecuted Crimean Tatar minority, civil society activists and journalists. He also provides emergency response and documentation of rights violations during raids and searches of activists’ homes. In January 2017, masked representatives from Crimea’s Centre for Counteracting Extremism detained Emil and took him to a local directorate of the Russian Federal Security Service (FSB) for interrogation. A district court found him guilty of “propagandizing for extremist organisations” and sentenced him to ten days in detention.

Following on continuing requests from Crimean Tatar HRDs in Ukraine to increase their visibility, the Award generated more than 10 unique articles in Russian and Ukrainian media. Top English-language media outlets in Ukraine, Hromadske International TV channel and The Kyiv Post, also ran features on the award winner, as did ATR Channel, a Crimean TV station popular with Crimean Tatars, which moved to Kiev following pressure from the Russian authorities. The Award also garnered print, online, radio, and broadcast television coverage in seven languages (English, Russian, Ukrainian, French, Spanish, Italian, Arabic). In Ireland, RTE and the Irish Times both ran features on the prize and the winner. Reuters issued a wire piece covering the winner, which made both the international Reuters “Big Ten” and “Top Stories” on the day of the event and has been republished dozens of times globally. Al Jazeera Media Network broadcast a segment featuring talks by the winner, Emil Kurbedinov, and Front Line Defenders Executive Director Andrew Anderson.