Kenya: Uhuru Kenyatta to court: ‘We shall revisit this’

Kenyan President Uhuru Kenyatta said on Saturday the country has “a problem” with its judiciary that must be fixed.

He was speaking a day after the Supreme Court annulled his election win last month and ordered a new poll within 60 days.

“We shall revisit this thing. We clearly have a problem,” he said, referring to the judiciary.

“Who even elected you? Were you? We have a problem and we must fix it,” he said, speaking on live television at the State House in Nairobi after he met with governors and other elected officials from his Jubilee party.

Kenyatta, however, also repeated his message from Friday that he would respect the court’s ruling.

The decision to annul the election was an unprecedented move in Africa where governments often hold sway over judges – and the first time on the continent that a court ruled against the electoral victory of an incumbent.

Analysts viewed the president’s latest comments on the judiciary as a worrisome development.

“This was a tremendous moment for Kenyan democracy, where the court upheld the rule of law. Politicians should be careful not to incite the public against the judiciary.” 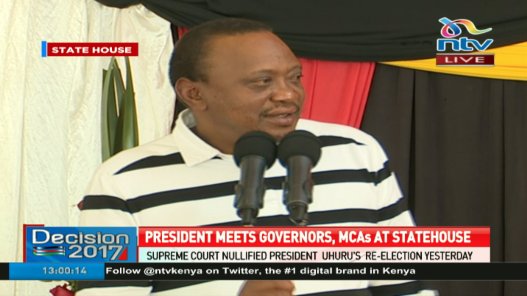