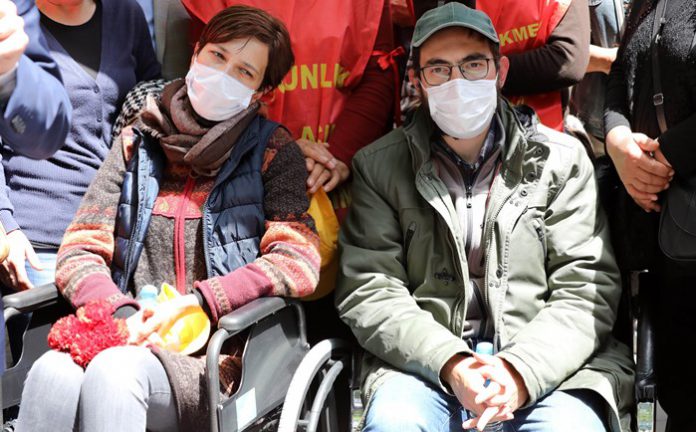 The lawyers for jailed hunger strikers Nuriye Gülmen and Semih Özakça — Ayşegül Çağatay, Ebru Timtik, Didem Ünsal and Naim Eminoğlu — were detained on Thursday as they went to apply to a state of emergency (OHAL) commission on behalf of their clients.

Turkish police detained the lawyers, who were calling for a press release to demand the return of the teachers to their jobs after applying to the OHAL commission on behalf of Gülmen and Özakça, who have been on a hunger strike for 169 days protesting their dismissal under state decrees.

The OHAL commission was established to investigate applications directly related to the loss of state jobs through the issuance of government decrees.

The educators were on the 76th day of a hunger strike to protest their dismissal by a statutory decree when they were arrested on terror charges on May 23 in Ankara.
Gülmen and Özakça said their strike aims to draw attention to the situation of more than 150,000 dismissed state employees.

The Turkish government started a crackdown on the opposition in the wake of a botched coup attempt on July 15, 2016 and arrested more than 50,000, dismissing or suspending around 150,000 judges, teachers, police and civil servants.

An official lawyer’s organization in central Vietnam’s Phu Yen province has threatened to “discipline” an attorney known for representing defendants in political cases after he suggested that most members of his profession use bribery to influence trials.

Vo An Don, a Phu Yen-based lawyer who has defended hundreds of members of underrepresented communities on a pro-bono basis, told RFA’s Vietnamese Service Wednesday that he received a letter from the Phu Yen Lawyer’s Association on Aug. 18 informing him he would “face discipline” for posting a comment on Facebook which said lawyers in Vietnam regularly use payoffs to win cases for their clients.

“I have served as a lawyer in cases for poor people and political cases, and I always tell the truth,” he said.

“That’s why the authorities really hate me—because I have said things that no other lawyer dares to say. Therefore, they are trying to take revenge on me.”

According to Don, the central Vietnam Lawyer’s Association recently sent a letter to lawyer groups at the provincial level, banning their members from posting “lies” on social media.

“But nobody tells the truth—they only lie,” he said.

“The truth is so ugly, they are afraid of having it revealed.”

Don said that Vietnam’s Ministry of Justice recently issued a decree that bans lawyers from making comments they deem to be “untrue,” and which grants permission to lawyer’s associations at the provincial level to revoke law licenses—a measure that previously could only be taken with the approval of the Vietnam Lawyer’s Association.

Ortega spoke during a meeting of Mercosur trade bloc prosecutors in the Brazilian capital, Brasilia. Ortega was removed by a new, pro-government constitutional assembly in early August after breaking with Venezuela’s socialist government. She fled abroad with her husband, whose arrest was ordered by the country’s supreme court.

“I want to denounce, in front of the world, a grave situation in Venezuela: that of excessive corruption,” Ortega said. “Because of that reason, (Maduro’s administration) is violating the constitution and law to protect itself.” Ortega said she had evidence implicating Maduro and other top officials in corruption involving Brazilian constructor Odebrecht and other companies.

Ortega told reporters after the meeting that Maduro loyalist Diosdado Cabello received $100 million from Odebrecht via a Spanish company called TSE Arietis, which was owned by cousins of Cabello. She also claimed that Maduro was the owner of a Mexican company that Venezuela had contracted to provide basic foodstuffs. She said Group Grand Limited was registered in Mexico under the names Rodolfo Reyes, Alvaro Pulido Vargas and Alex Saab, but that Maduro was the real owner.

“It’s impossible for cases to be investigated in Venezuela,” said Ortega, adding that she was providing documentation to the United States, Brazil, Colombia and Spain. Ortega’s claims could not be immediately verified. Emails sent to Group Grand Limited and TSE Arietis seeking comment were not returned.

MALAYSIA has been aggressively clamping down on the freedom of expression through the use of legislation, most notably internet laws, said international rights group Article 19 in its country analysis of the first half of the year.

“The space for dialogue and dissent, both online and offline, is increasingly closing, most notably through the use of Section 233 of the Communications and Multimedia Act (CMA) 1998,” the organisation said in its report.

“The increased use of the CMA this year is of particular concern, and has overtaken the Sedition Act 1948 as the major obstacle to freedom of expression in Malaysia.

It cited charges brought against human rights lawyer Siti Kasim in June under the Penal Code over a transgender event she had attended more than a year prior, as well as the investigations launched into three activists for their role in calling for greater transparency over the disappearance of Pastor Raymond Koh and several others.

“Human rights defenders regularly face harassment, arrest and criminal charges due to their work, particularly when defending the right to freedom of expression in Malaysia.  ”

The report noted that media freedom was constantly undermined by restrictive laws, which were regularly invoked to harass journalists and media organisations.

The group called for all charges against human rights activists and members of the media to be dropped, and the repeal of restrictive legislation.

Turkey may be trying to silence us by imprisoning human rights defenders, like our Director Idil Eser, but they can’t imprison our voices.

📢SPEAK UP and tell Turkey to #FreeRightsDefenders>>http://bit.ly/2tmlSM8