Chile has granted political asylum to five Venezuelans who have been threatened by the government-stacked Supreme Court after being named to the court by the opposition-controlled congress.

Foreign Minister Heraldo Munoz announced Tuesday that the judges who sought refuge at the home of the Chilean ambassador in Caracas will be allowed to reside in Chile.

The Chilean government has asked President Nicolas Maduro to let them leave the country.

Venezuela’s congress named 33 new judges to the Supreme Court in late July. But the court said they had illegally usurped power and would face consequences.

A new, all-powerful constitutional assembly approved a decree Friday to take over congress’ power to pass legislation on important matters. Dozens of foreign governments have refused to recognize the assembly.

The Law Society of Scotland has joined the widespread show of support for human rights solicitor Aamer Anwar, following a series of abusive messages in response to his eye witness account of last week’s terror attack in Barcelona.

Lorna Jack, Chief Executive of the Law Society of Scotland said, “In spite of the tirade of abuse which Aamer has been subjected to in the wake of last week’s traumatic events, he has shown characteristic grit and integrity.

“On behalf the Society, I would like to add to the heartening and widespread show of support for him in speaking up for tolerance and decency.”

Cameroon: Ayah Paul Abine Cries out from detention, says he is under more torture

The retired Advocate General of the Supreme Court Ayah Paul Abine expresses his tears in a facebook post. He writes:

At the time of my official assignment as Advocate General of the Supreme Court of Cameroon, my University classmate, Mr. Ndjodo Luc, was of the same grade and seniority in the legal profession as myself. But by law in force, he could not be my head of Department because I was/am older than him by two years. In this particular case, Ayah the ‘anglophone’ was not only marginalized but he lost even his position as a second class ‘citizen’. A francophone judge of index 1115 was appointed the deputy head of department, relegating Ayah the Anglophone on index 1400 to the third position.

This was just the starting point of my road to Calvary. Even as I embraced all the ignominy in stunning resignation, I waited for six months before being given an office. When the first consignment of new vehicles came, Ayah was given but a second hand official car which shortly went bad. I then took to my boss a list of spare parts needed for repairs but the latter, The Procureur General, hurled the list at me, insisting that the list must be translated into French before he would even look at it.

By the list of ‘seniority’ made by the court, I was the 9th (Number 1 Anglophone) in a descending order. What was all the stranger was that I was not given a new official vehicle even when the second consignment of fifteen new vehicles came. As a result, I had to go to work often by taxi. How could we get to this? It is no news that I went for 17 months without salary which has been confiscated by the state. That money, some of which was due as far back as 2013, is being owed me, even as these words are being written. I was therefore left without even a personal car!

Lawyers have boycotted the courts in Karachi on call of bar association like other cities of the country.

The lawyers shut down the entrance of the city court and clients were also prevented from attending the court.

The reports of issuance of orders by Lahore High Court (LHC) for an arrest of the Multan Bar Association president provoked the lawyers to boycott the courts.

While in Lahore High Court, lawyers reacting aggressively damaged the main gate of the court.

Police resorted to shelling to control the situation.

The lawyers have termed the incident as police high-handedness and boycotted the courts.

China: Former Rights Lawyer Tried in “Choreographed” Warning to Others

Activist and former rights lawyer Jiang Tianyong was tried for inciting subversion in Changsha on Tuesday, pleading guilty under what supporters suspect was heavy coercion. Jiang disappeared last November while visiting the family of Xie Yang, a rights lawyer detained in the sweeping Black Friday crackdown in 2015 who has since been tried for inciting subversion and is now reportedly under house arrest. In March, Jiang was publicly accused of helping fabricate Xie’s graphic accounts of torture in detention, and confessed to this on state TV, again under suspected coercion. The Guardian’s Tom Phillips reported on his trial, and his claims of being led astray by foreign instigators:

“I’m ashamed of it,” Jiang told the court, according to the English-language China Daily, which sent a correspondent to cover proceedings in a sign of Beijing’s determination to shape the narrative around the prosecution.

According to the state-run broadsheet, Jiang admitted to attending overseas training sessions where he was encouraged to reject China’s political system and ruling party. “So I wanted to make a change,” he reportedly said.

[…] In an online video released by the court, Jiang appears asking for clemency: “Please give me another chance to be a human being … and to make up for my wrongdoings … Once I am free I will never return to my old ways … I sincerely ask the court to set me on a path towards the sunshine.”

[…] In a front-page story, apparently timed to coincide with Tuesday’s trial, the China Daily quoted Chinese academics who heaped praise on the “transformative changes” witnessed since Xi became leader in late 2012. “China has made great progress in advancing the rule of law,” claimed Jiang Guohua, a law professor. [Source] 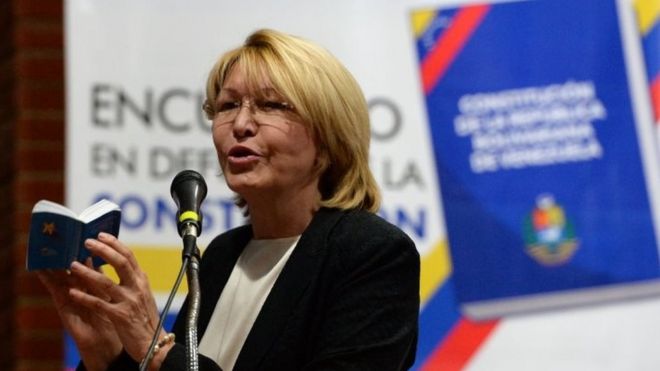 Mr Maduro said Mrs Ortega and her husband had been involved in serious crimes.

The couple face court action in Venezuela which they say is politically motivated.

Colombian media reported they are expected to seek asylum in the US.

Mrs Ortega is Venezuela’s most vocal high-profile opponent of the Maduro government.

She is a former loyalist and was for years a committed member of the governing (USPV) party.

She and her husband fled first to the Carribean island of Aruba off the coast of Venezuela and from there flew to Colombia in a private jet.

In Colombia, Preisdent Juan Manuel Santos said his country would protect her and offer her asylum if she requested it.