Ramazan Demir is a Turkish human rights lawyer, who has in his young career he has made an outstanding contribution to the promotion, protection and advancement of the human rights of all, and of the Kurdish people in Turkey in particular. Since 2009, Ramazan has continued to represent victims, journalists, and lawyers in the Kurdish areas of Turkey. Unfortunately, due to his valuable human rights work, Ramazan has faced serious personal consequences as criminal charges have been brought against him twice. The second time, in April 2016, Ramazan has been charged with terrorist related activities, because of his work for TUAD (an association for relatives of prisoners in Southeast Turkey). Furthermore, the case-file against him clearly shows that his activities as a human rights lawyer and his relationship with the international human rights community were used as grounds for the accusations against him. Despite the fact that the trial is still on-going, Ramazan took up his work for victims of human rights violations again and continues working for them up until today. The next hearing will be on 13 September 2017. Members of the judging panel noted that in terms of Ramazan’s efforts in the protection and advancement of Human Rights, he has made “significant personal endeavours” and in terms of the international impact and sustainability, Ramazan has made “a high impact on defence work in extremely challenging and threatening circumstances”. Lawyers for Lawyers, the organisation that nominated Ramazan, because they believe he is “a prominent and fearless defender of the rule of law and human rights.”

U Ko Ni was an activist, lawyer, author and academic. He worked tirelessly against the military dominance in Myanmar, contributing to the repeal of certain controversial laws and vigorously advocating for the amending of the military drafted 2008 Constitution. The 2008 Constitution reserves 25 percent of parliamentary seats for the military, empowers the military to appoint the ministers of defense, home affairs, and border affairs, and allows the military to dissolve the government during a national emergency. In private conversations, U Ko Ni was frank about the need to reform the 2008 Constitution in order to tackle Myanmar’s most serious problems and to strengthen the rule of law. U Ko Ni also became increasingly concerned about the myriad of ways in which Muslims are marginalised and discriminated in Myanmar and was eager to find ways to make a difference, notably through discussing hate speech and hate crimes in Myanmar and potential solutions. Members of the judging panel noted that he was a “significant advocate for protection of minorities in Myanmar” and had an “outstanding track record.” U Ko Ni was assassinated on 29 January 2017, several INGOs and others condemned the assassination. The International Commission of Jurists (ICJ), along with the International Bar Association’s Human Rights Institute (IBAHRI) and Lawyers’ Rights Watch Canada in their joint statement described U Ko Ni as somebody “who strongly advocated against religious discrimination and for inter-communal peace”, and called for “a prompt, impartial and effective investigation capable of identifying all those responsible and holding them accountable in a fair trial.”

After an attempt to visit Chen Guangcheng, a laywer who was put under house arrest in Shandong province, which ended in a shocking and violent interception, Xie Yang, at the age of 38, made the decision to become a human rights lawyer. From then on, until his arrest in July 2015, Xie Yang represented dozens of human rights cases, confronted China’s human rights abuses and dictatorial ills, and spoke out fearlessly on China’s social media for his belief in democracy and universal human rights. Xie Yang was arrested during China’s ongoing crackdown on human rights lawyers and activists in July 2015, and then was subjected to 6 months of secret detention during which time he was cruelly tortured. Last November, 17 months after his arrest, Xie Yang was finally allowed to see his own lawyers where he requested that a thorough description of the torture he had suffered should be published to expose the widespread use of torture in China. The torture revelations marked a turning point, as the international outcry against torture made it impossible for China to continue its planned trials and sentences. The government signalled that it would release Xie Yang in “due time,” while since late February, Xie Yang’s lawyers have been prevented from meeting him. On May 8, Xie Yang was tried, and in the court and on camera he admitted guilty and denied torture. He was released on that day, but except for a couple of appearances in the company of police, he has been disappeared and his wife and relatives have not been able to contact him. Members of the judging panel noted Xie Yang had given an “outstanding personal sacrifice and commitment to the causes of human rights.”

A Chinese human rights advocate who defended blind activist Chen Guangcheng and lawyer Gao Zhisheng is due to stand trial on subversion charges in central China on Tuesday.

In a show of support for Jiang, the wives of two other 709 activists left Beijing on Monday for Changsha to try to attend Jiang’s trial, according to Wang Qiaoling, one of the women.

Jiang, 46, was formally charged in late May with “subverting state power”.

The former lawyer took on politically sensitive cases such as those of Falun Gong practitioners and Tibetan protesters until he was disbarred in 2009.

He disappeared in November last year after travelling to Changsha to visit rights lawyer Xie Yang, who was detained in the crackdown in July 2015. A month later, authorities confirmed they were holding Jiang on suspicion of inciting subversion. 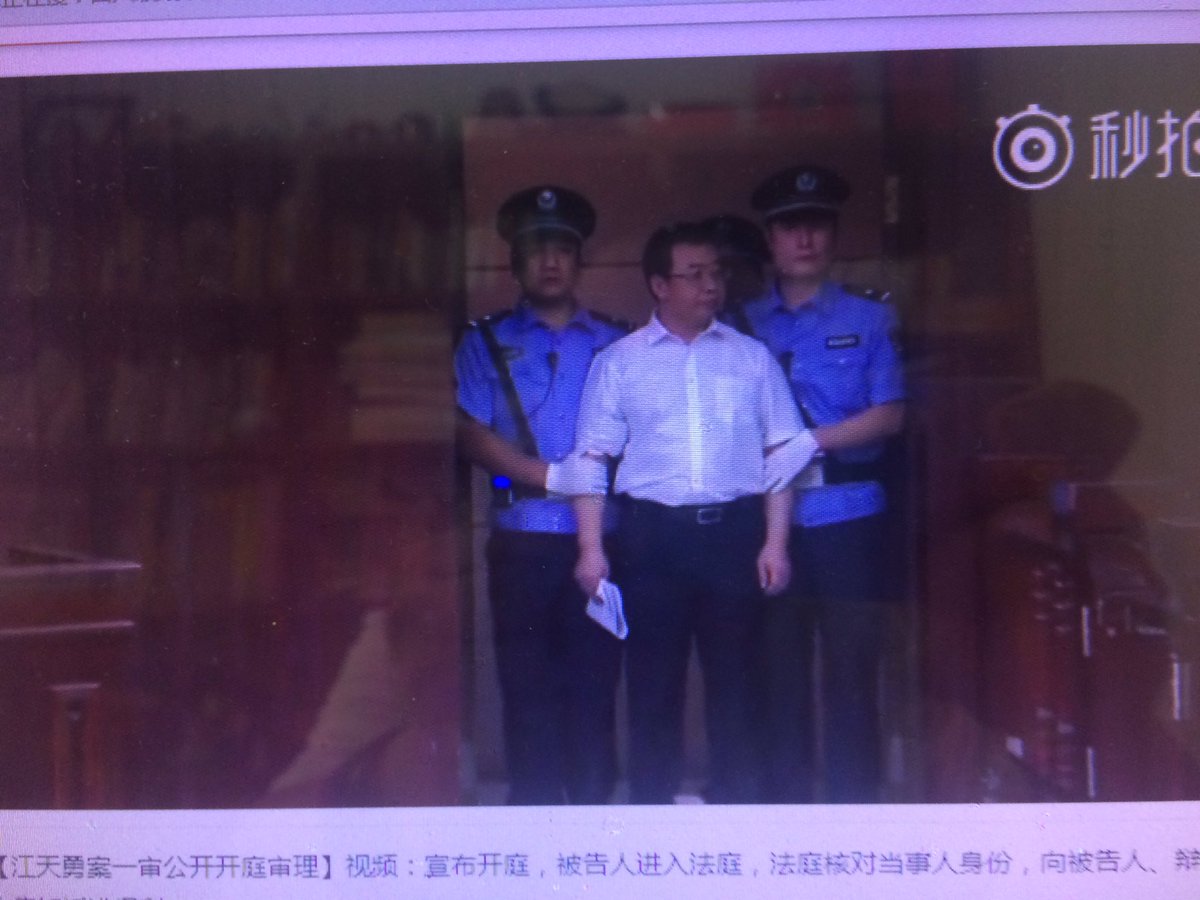 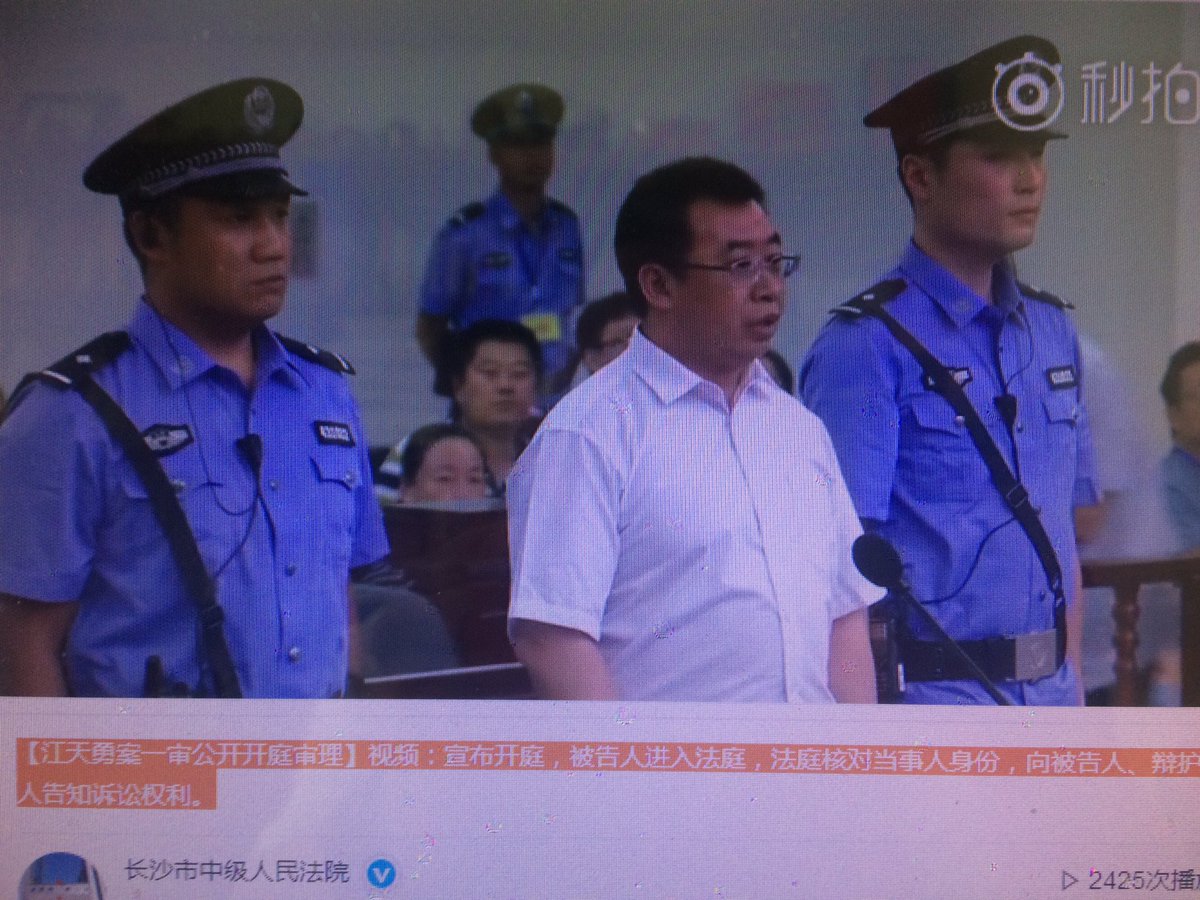 #JiangTianyong‘s trial in Changsha starts, even broadcasted on the court’s weibo: old tactics like some other #709crackdown trials. 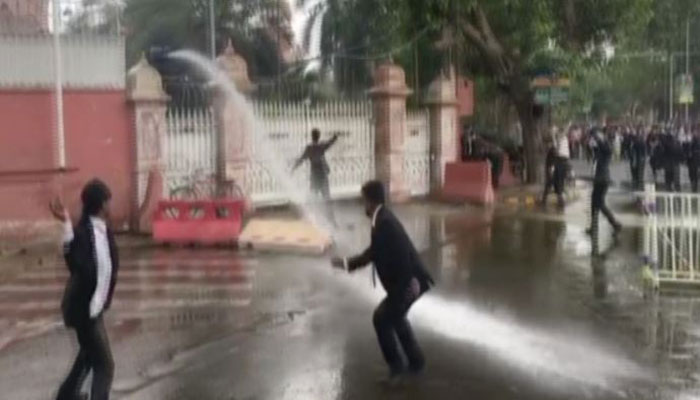 Lawyers across the country have pledged a strike tomorrow (Tuesday) to protest ‘police high-handedness’ and ‘unjust’ court ruling after the Lahore High Court (LHC) on Monday ordered the arrest of a legal fraternity leader.

The bench also ordered the suspension of the lawyers’ licences. The chief justice observed during the hearing that the sanctity of the court is supreme and there will be no compromise on it.

The court termed Qureshi’s conduct ‘most unbecoming and demeaning, that blatantly offends the prestige and honour of this court’.

Following the order, enraged lawyers loyal to Qureshi attempted to forcibly enter the courtroom, breaking the gate of a corridor and chanted slogans against the chief justice inside the LHC building.

Lawyer and Women’s Rights Defender Azza Soliman is a finalist for the 2017 Allard Prize for International Integrity.

Soliman is a co-founder of the Center for Egyptian Women’s Legal Assistance and has dedicated her life to fighting corruption and injustice faced by Egyptian women in both the private sphere and the judicial system.

She has worked to support women’s access to justice by using progressive interpretations of religion to influence legislation and combat the monopoly and corruption of religious institutions.

Human rights lawyer Wang Quanzhang, who has been disappeared by the Chinese state since August 2015, has been shortlisted for the Dutch Human Rights Tulip Award. Public voting will begin on 28 August. He needs your support and your vote. Stay tuned for information on how to vote and check back on twitter for the hashtag #Tulip4Wang

The Turkish judge sits in a busy cafe in a big German city. Thirteen months ago, he was a respected public servant in his homeland. Now he is heartbroken and angry over the nightmarish turn of events that brought him here.

The day after a 2016 coup attempt shook Turkey, he was blacklisted along with thousands of other judges and prosecutors. The judge smiles, sadly, as he recounts hiding at a friend’s home, hugging his crying son goodbye and paying smugglers to get him to safety.

“I’m very sad I had to leave my country,” he said, asking for his name and location to be withheld out of fear that President Recep Tayyip Erdogan’s government might track him down. “But at least I’m safe and out of Erdogan’s reach. He cannot hurt me anymore.”

Germany has become the top destination for political refugees from Turkey since the failed July 15, 2016 coup. Some 5,742 Turkish citizens applied for asylum here last year, more than three times as many as the year before, according to the Interior Ministry. Another 3,000 Turks have requested protection in Germany this year.

Syria: ‘This case is about saving humanity’

Mazen Darwish cowered in the corner of a blood-stained cell in the Syrian capital Damascus.

“Tomorrow, I’ll be free,” he told himself.

Deep down, he knew this was not true, but holding onto the faint glimmer of hope kept him alive. He had not showered in months and felt weak from food deprivation. Every day, he was beaten with clubs, shocked with electric prods and hung by his arms from the wall, Darwish recalled.

“The guards used torture for torture’s sake – not to get information, but to humiliate and destroy us,” he told Al Jazeera.

The prominent human rights activist spent three and a half years in government custody. In August 2015, he was released.

“Regime members have acted with impunity for years now,” said Darwish, 43. “Any political solution to the Syrian conflict without accountability and justice won’t bring sustainable peace.”

Darwish, a lawyer and pro-democracy activist, openly criticised the Syrian regime’s crackdown on anti-government protests in March 2011. In February 2012, security forces stormed the Damascus office of his organisation, the Syrian Center for Media and Freedom of Expression. Darwish, his wife and other members of the centre were arrested.

In the ensuing years, he was transferred from one detention centre to the next, including a military branch, an air force security camp and a state security branch. Within the first year, Darwish said, he lost 90 pounds and a skin infection spread across his body. “I looked like a skeleton,” he said.