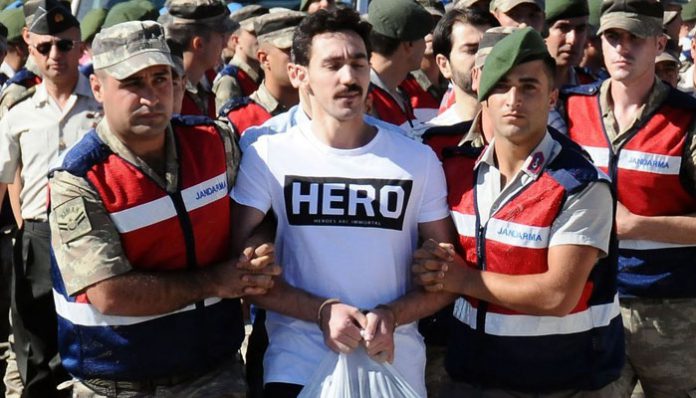 Deniz Akbulut, the lawyer for noncommissioned officer Gökhan Güçlü, one of the suspects on trial for an assassination attempt against President Recep Tayyip Erdoğan on the night of a failed coup last year, was detained as he was leaving the Muğla Courthouse after a hearing on Wednesday and arrested by a court as part of an investigation into halted intelligence agency trucks in 2014.

According to the HaberTürk daily, Akbulut was accused of being a “courier” between gendarmes who stopped Syria-bound National Intelligence Organization (MİT) trucks near Adana in 2014 and Hamza Ali Ece, an alleged imam of the Gülen movement, which is accused of being behind the failed coup. The movement strongly denies the accusations.

Akbulut was arrested by a court on Wednesday.

Akbulut’s client Güçlü was a target of the pro-government media after he was thrown out of a courtroom in July for wearing a T-shirt bearing the word “hero.”

Several people across Turkey have been detained, some of them arrested, for wearing hero T-shirts.

The 2017 Allard Prize for International Integrity will be awarded at a ceremony to be held in Vancouver, Canada on September 28th, 2017. The $100,000 CAD Prize was established in 2012 and is one of the largest anti-corruption prizes in the world.

The finalists for this year’s prize are Azza Soliman (Egypt), Khadija Ismayilova (Azerbaijan), and Car Wash Task Force (Brazil). The keynote speaker at this year’s ceremony will be internationally renowned journalist Glenn Greenwald.

Azza Soliman – A renowned women’s rights lawyer, Azza Soliman is the co-founder of the Center for Egyptian Women’s Legal Assistance (CEWLA). She has dedicated her life to fighting corruption and injustice faced by Egyptian women in both the private sphere and the judicial system. She started her activism in 1995 when she was arrested after exposing the torture imposed on female members of the Islamic Group. Soliman has worked to support women’s access to justice by using progressive interpretations of religion to influence legislation and combat the monopoly and corruption of religious institutions. In 2015, Soliman was unjustly charged with unauthorized protest and public order violations after testifying against a policeman who she witnessed killing a female human rights defender during a protest. In response, she founded the “Protecting Witnesses and Whistleblowers Coalition” to help enhance the Rule of Law. Currently, the Egyptian government has curtailed Soliman’s freedom by freezing her law firm’s and her own private assets and banning her from traveling outside Egypt.

The Philippines: Lawyer of Reyes brothers dies after gun attack in Palawan

A lawyer based in Puerto Princesa City in Palawan died after he was attacked by a motorcycle-riding gunman on Tuesday, August 15.

Aban was on a motorcycle and went out to buy food when he was gunned down by the still unidentified perpetrator at 8:30 a.m. on Abueg Road, Barangay Bancao-Bancao, dzBB radio said, quoting a report from Senior Police Officer 2 Eustaquio Ferrer of the city’s Mendoza Police Station.

The assailant chased Aban and shot him four times until the lawyer fell unconscious on a grassy portion of the road.

The National Investigation Agency (NIA) on Wednesday conducted fresh searches at 12 locations in Jammu and Kashmir as part of its probe into whether the funding of separatists from Pakistani terrorist outfit Lashkar-e-Taiba (LeT) was being used to fuel violence in the valley.

The searches, which the central agency termed as follow-up action, were carried out in Srinagar, Baramulla, and Handwara.

Those raided on Wednesday included a Srinagar-based advocate Mohammed Shafi Reshi and three relatives of prominent businessman Zahoor Watali, whose premises were searched in the first round of raids.

“We suspect financial links between the separatists and those raided on Wednesday,” said Alok Mittal, inspector general of NIA.

Thailand: Thai activist jailed for two and a half years for posting BBC article

A Thai student activist was jailed for two and a half years on Tuesday for posting on Facebook a BBC article deemed offensive to Thailand’s king, his lawyer said.

Jatupat Boonpattaraksa, also known as Pai, an activist and critic of the ruling junta, was the first person to be charged with royal insult, known as lese-majeste, after new King Maha Vajiralongkorn formally ascended the throne on December 1, following the death of his father, King Bhumibol Adulyadej.

Jatupat, a former law student, was arrested on December 3 and charged for posting a BBC Thai language profile of the king which some deemed offensive.

He was also charged with violating a computer crime law for posting a link to the BBC report, which was shared by more than 2,000 people.

He pleaded guilty to the charges against him earlier on Tuesday, prompting the court to bring forward its verdict.

“The court sentenced Pai to five years in prison, reduced to two and a half years,” Kissandang Nutcharat, Jatupat’s lawyer, told Reuters.

Renowned Chinese lawyer Gao Zhisheng, who has been under house arrest for the last three years, suddenly disappeared from his home on Aug. 13.

As of Aug. 15, there has been no update on his whereabouts.

Geng said she tried to call her husband on Aug. 13, but could not reach him. She finally got in touch with his older brother Gao Zhiyi, who informed her that Gao disappeared that morning.

“Gao’s brother went to Gao’s home at around 8 a.m. to call on Gao to have breakfast. He called Gao a few times, but Gao did not come out of the room. Gao’s brother went into his room and saw that nobody was there. He reported to the police at 9 a.m. Local police went to the [nearby] mountain and searched for Gao everywhere,” Geng told an NTD reporter.

Geng said there has been no news about Gao so far. She had been trying to call Gao’s brother since then, but could not reach him either.