Pakistan: Khadija was stabbed 23 times in Lahore. Here’s how she put her attacker behind bars

It’s been more than a year since young law student Khadija Siddiqui was stabbed mercilessly by her class fellow Shah Husain. The incident took place on May 3rd, 2016 in broad daylight on Davis Road, Lahore where Khadija had gone to pick up her younger sister from school. Despite 23 gashes to her body, including the neck, she miraculously survived. Khadija courageously fought for justice and late last month, a court in Lahore sentenced her attacker, who happens to be son of an advocate, to seven years in prison. She sees her survival and legal victory as a chance to live a more meaningful life.

They call court proceedings a trial, and a trial it was. Not only was it a trial for the law to give due recompense for my ghastly wounds, but it was also a trial for my soul, a trial of my patience and, above all, a trial of my honour, dignity and character.

On the 13th and 14th of July, I was cross-examined by the defence council. Waves of nausea swept over me as I stood in a courtroom roiling with men, each day for six exhausting hours at a stretch.

As hard as it is to believe, the defence actually resorted to hiring men to stand behind me to giggle and heckle whenever the opportunity arose. Their base mentality and rotten souls were on display for all to see. Adrenaline rushed through my body, pushing me to flee.

But their hideous tactics only hardened my resolve in standing up to this lawyer boys club, and the voice inside my head steadied me: The truth shall prevail. 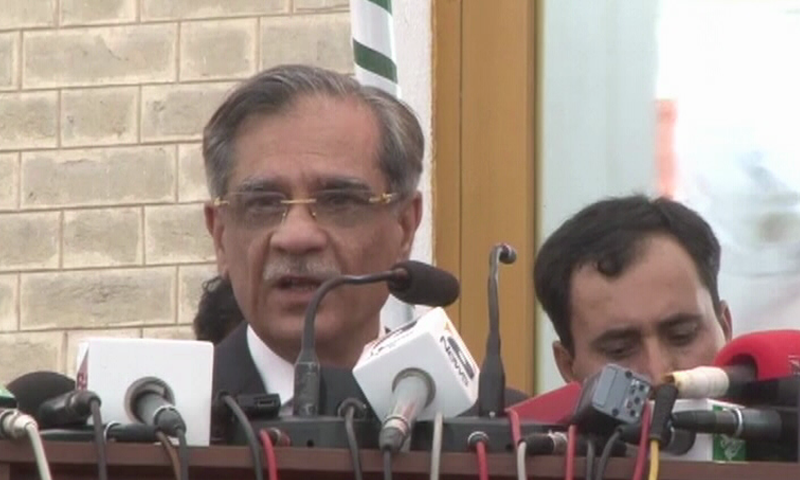 Lawyers across the country boycotted court proceedings on Tuesday to mourn the Quetta carnage that claimed more than 70 lives last year, of which 56 were lawyers.

Addressing a gathering commemorating the anniversary of the carnage of Quetta Civil Hospital last year, Chief Justice Saqib Nisar emphasised the need for all institutions to perform their duty and contribute to the country’s struggle for peace.

“We cannot lose hope,” he said. “We have to fight this war with courage.”

The chief justice had arrived in Quetta along with judges of various high courts and apex court of the country and lawyers to mourn the tragic incident. The lawyer bodies had organised a condolence reference at the Balochistan High Court to pay rich tribute to the victims of the terror attack.

Political parties, civil society, journalists have also joined the legal fraternity in remembering the victims of the suicide bombing that also included civilians and journalists.

Pakistan Bar Council (PBC) and the Supreme Court Bar Association had given the strike call to mourn the killing of members of the legal fraternity in Quetta.

Fair Trials has joined the call to the Armenian authorities to stop harassment of criminal defence lawyers, through a letter coordinated by the Civic Solidarity Platform (CSP), a coalition of NGOs based in countries spanning from North America to Europe and Central Asia.

The letter is a response to the reported harassment of lawyers defending people involved in the July 2016 protests, which called for the release of opposition leader Jirair Sefilian and the resignation of President Serzh Sargsyan. The lawyers in question have been trying to defend some members of the armed opposition group Sasna Tsrer, who are facing trial having seized a police station in Yerevan, Armenia’s capital city, to voice its calls for reform and ask people to join their protest. Thousands of people took the protest to the streets, until police forces put down the demonstrations through the use of force. According to official sources, over 60 people have been prosecuted and will face trial in relation to these events.

Lawyers Arayik Papikyan, Mushegh Shushanyan and Nina Karapetyants from the Helsinki Association of Armenia are among those who have faced state-enforced harassment. Specifically, they have been prevented from visiting their clients in detention and holding private discussions with them. Their notes on the cases have been confiscated and destroyed by officials in the detention facilities, thus hindering them from building an appropriate defence for their clients.

Harassment did not stop at prison but continued in court. Some of the lawyers have been subjected to lengthy and intrusive security searches when arriving to court, a procedure that was not applied to the prosecutors and other actors in the trial. Moreover, some judges and the Public Prosecutor’s Office have requested the Chamber of Advocates to take disciplinary sanctions against Arayik Papikyan, Mushegh Shushanyan and Nina Karapetyants because of their social media activities and media interviews regarding irregularities during the court proceedings, as well as broader developments in Armenia. The Chamber of Advocates has initiated disciplinary proceedings in these cases and the proceedings are currently under way. If found guilty, these lawyers can be fined and even deprived of their license to practice law.

Even though suspicions had arisen around having the meeting on the island, in fact, having a meeting on the island is an ordinary thing. Once, I had also joined a workshop in Heybeliada. Together with a group of academicians, journalists, and legal experts, we had talked about the circumstances within the media. The reason for having a meeting on an island is so that you do not get stuck in a hotel room for two days but work in a peaceful atmosphere with a clear head.

Besides, if the one on Büyükada was a “secret and dangerous” meeting as claimed, would the meeting room’s doors be open?

“The door was open,” is written on the official report. Today, I will tell you about Amnesty International Turkey’s director İdil Eser who was arrested on charges of “helping an armed terrorist organization” because of joining this meeting. I will tell you about her from her friends’ point of view.

İdil was born in 1963 in İstanbul. She studied business management at Istanbul University after graduating from the Üsküdar American Academy and did her postgraduate in International Relations at Columbia University. For many years, she worked as a freelance translator after she finished her doctorate degree courses at Chicago University’s department of Russian history.

The case of Wu Gan will be tried at 8:30 am on 14 August by the 1st Court of Tianjin Second Intermediate People’s Court. The hearing will not be open as the court believes that the evidences conducted in investigations implicate state secret.