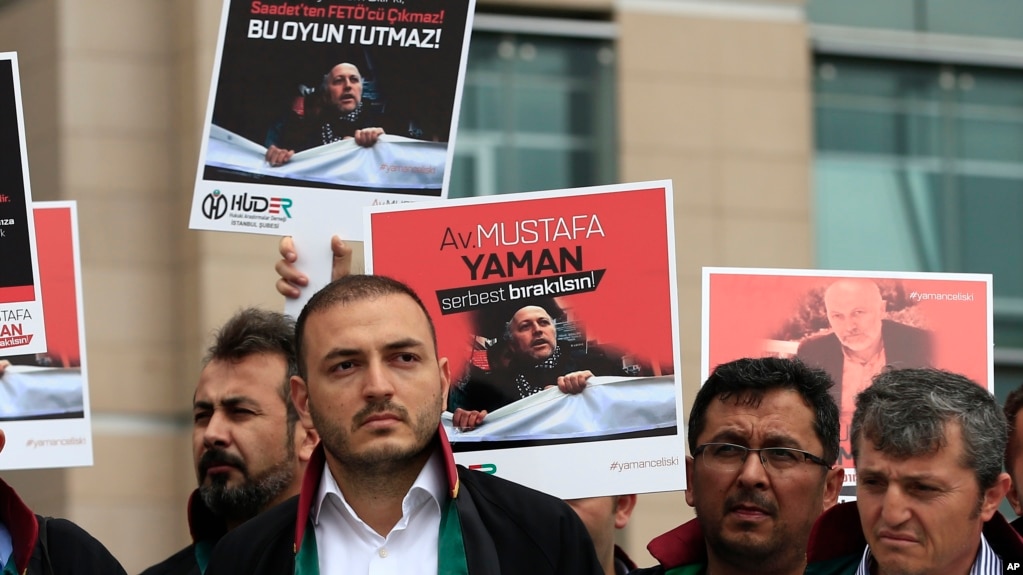 (Turkish lawyers hold a protest outside Istanbul’s court, July 17, 2017, demanding the release of Mustafa Yaman, a lawyer who according to Turkish media was detained earlier this month.)

Ten Turkish human rights activists who were detained by police while attending a training workshop appeared before a court in Istanbul on Monday to face possible charges or be released from custody.

The activists, including Amnesty International’s Turkey director Idil Eser, were detained earlier this month at a hotel on Buyukada island off Istanbul and questioned by anti-terrorism police.

Amnesty, which has called for their immediate release, said the group was being investigated for membership in an armed terrorist organization. Turkish President Recep Tayyip Erdogan has made vague accusations against the 10, saying they were holding a meeting that had the “nature of a continuation” of last year’s failed coup attempt.

Other than Amnesty, the activists are members of the Women’s coalition, the Helsinki Citizens Assembly, the Human Rights’ Agenda Association, the Association to Monitor Equal Rights and the Rights Initiative. Their two trainers — a German and a Swede — were also detained.

L4L is concerned about the arrest and detention of lawyer Sylva Mbikayi. On 23 June 2017, Sylva Mbikayi was arrested in Kinshasa, Democratic Republic of Congo, when he attempted to visit Jean-Marie Kalonji who was arrested by military security forces a few hours earlier.

We were informed that Mr. Mbikayi was arrested without a warrant and without being informed about the reasons for his arrest, when he visited the Military Intelligence Headquarters (DEMIAP) at Bumba to consult with his client, Jean-Marie Kalonji (a lawyer in training).

Earlier that day, Jean-Marie Kalonji was stopped by soldiers at an exit check-point of a military camp. When he explained that he could not show his passport as it was with an embassy where he had applied for a visa, the soldiers started questioning his nationality and searched his bag which contained flyers for a Lumumba scholarship programme set up by the youth movement Quartrieme Voie/ il est temps (the fourth way/ it is time). Hereafter he was arrested.

Sylva Mbikayi was informed immediately after the arrest of Jean-Marie Kalonji. When he arrived at the military camp where Jean-Marie Kalonji was detained, he was also arrested. Both men have been detained there to date, without access to their family members or lawyers.

L4L called on the authorities to release Sylva Mbikayi as soon as possible.

Ovosi, who is a mother of two was reportedly kidnapped on Friday while on transit.

A family member of the victim, Abdulateef Ovosi said the abductors contacted the family on Sunday for the first time demanding for ransoms.

“As at this morning (Sunday) , I heard a ransom has been made, but I have not actually ascertain that now.  The family were holding a meeting when the kidnapers called. As we speak, their lines are no more reachable for us to know what amount they are demanding.

“We are all worried and we are praying asking everybody to join us in praying for her safe return,” he said.

When contacted, Kogi State Police Commissioner, Mr Wilson Inalegwu, who confirmed the incident said over 100 security operatives have since been deployed to comb the bushes to secure her safe release.

The latest case of kidnapping is coming barely a day after some unknown gunmen abducted and murdered the Osun State Permanent Secretary Bureau of General Services, Mrs Olufunke Oluwakemi Kolawole around Okene area of the state while on her way to Abuja.

Celebrated human rights and public interest lawyer, Francis-Xavier Sosu, has been presented with a humanitarian award by the Marshal UK & The Vine Complex Ghana on Saturday July 15, 2017, in Accra.

The special award recognises the need to give back to society  and is conferred on groups and individuals making positive impact in Ghana and abroad.

Although the renowned human rights Lawyer is currently in court fighting a three-year ban by the General Legal Council for touting and breaching regulations on legal fees, he has been a strong force in the fight for justice for vulnerable Ghanaians – sometimes taking up cases free of charge for people who cannot afford legal fees.

The citation reads in part:

“Lawyer Francis-Xavier Sosu grew up as a destitute street child, was adopted by Village of Hope, and found God’s grace. It’s through benevolent people that he became a Lawyer and he specifically chose Public Interest And Human Rights Law so he could give back to Society.

“He has since become an Ambassador of Hope to many street children and destitute persons in general both in Ghana and abroad. Lawyer Sosu has been featured internationally through Fox 13 TV in the USA, and impacted several young children in the USA by sharing of his life story. Today, Francis-Xavier Sosu is a renowned Human Rights and Public Interest Lawyer, Social Protection and Child Rights Activist in Ghana. He holds BA (Hons), Sociology, LLB (Hons). BL, and an LLM (Oil and Gas Law). He is the Managing Partner of F-X Law & Associates (Human Rights Law Firm in Accra)…”

Egypt: Egypt’s President Sissi is Bullying Rivals Ahead of His Re-election Bid

A prominent Egyptian lawyer faces trial for making an obscene gesture, as Egypt’s president bullies rivals ahead of his re-election bid

If Khaled Ali is worried, he isn’t showing it. Sitting behind a wooden desk in his office in downtown Cairo, the prominent human rights attorney is discussing his case with the calm remove of a lawyer defending his client. Only this time, Ali is the one on trial.

In May, Egyptian authorities arrested Ali, a possible presidential candidate in the Egyptian elections early next year, on charges of “offending public decency” for making a rude hand gesture outside a Cairo courthouse. Ali made the gesture in January, in celebration of a ruling by one of Egypt’s highest courts in a lawsuit he had filed against the government of Egyptian President Abdel-Fattah el-Sissi for transferring control of two Red Sea islands to Saudi Arabia. The agreement, which many Egyptians believe el-Sissi made in exchange for billions of dollars in Saudi aid and investment, sparked rare street protests last year, despite heavy legal restrictions on demonstrations. Though Ali prevailed that day, he ultimately lost the suit. El-Sissi bypassed the courts and sought approval from Parliament, which ratified the deal on June 14.

Ali claims he was arrested in retaliation for his challenges to the regime, including the lawsuit, and his announcement in February that he was considering a presidential run. The charge against him, which Amnesty International has called “absurd,” has come to symbolize el-Sissi’s many efforts to stamp out any possible rivals. “There is no justified reason for my arrest,” Ali tells Newsweek. “It was an attempt to scare me.”

Ali has not been scared into compliance. If the verdict in his trial doesn’t prevent it, he still might run in next year’s election.

Issa Amro, founder of the Hebron-based group Youth Against Settlements, and Hebron-based lawyer Farid al-Atrash, who is the head of the southern division of Palestinian statutory watchdog Independent Commission of Human Rights, were both arrested for participating in a peaceful protest in February 2016.
They were later charged with “demonstrating without license,” “entering a closed military zone,” “incitement,” and “obstructing an officer.”
The march in question commemorated the 22 years since extremist American-born Israeli settler Baruch Goldstein opened fire on Muslim Palestinian worshipers, killing 29 and injuring more than 120 in Hebron’s Ibrahimi Mosque in 1994.
The demonstration also called for the reopening of al-Shuhada street, which was shut down soon after the massacre, and called for the removal of discriminatory restrictions on movement placed on Palestinians in the city.
Al-Atrash has vehemently denied charges claiming he attacked Israeli soldiers, with video footage of the arrest showing him standing and holding a poster peacefully in front of Israeli soldiers when he was pushed, dragged, and then violently arrested by a number of soldiers.
…

The detention of human rights activists and academics ahead of the anniversary of the failed July 15, 2016, military coup in Turkey has rattled a once-vibrant civil society, fearful the government is broadening its yearlong clampdown that has already ensnared tens of thousands of people.

On July 5, police raided a hotel on an island off the Istanbul coast where leading rights groups had gathered for a training seminar. Ten people, including Amnesty International’s Turkey director Idil Eser, were detained in a terrorism probe.

Then on July 10, police arrested 42 university staff members, including Koray Caliskan, a former adviser to the main opposition Republican People’s Party (CHP). They are seeking another 30 academics suspected of links to the bungled coup.  Caliskan was sent to house arrest late on Friday, media reported.

“We have crossed a new threshold,” said Andrew Gardner, Amnesty’s researcher on Turkey. “Under the post-coup attempt crackdown, there has been a huge number of assaults on civil society, critical journalists and the political opposition. But this is a direct attack on the backbone of human rights.”

The detentions come as the nation commemorates the first anniversary of the coup attempt, when a faction of the army sought to topple President Recep Tayyip Erdogan in a spasm of violence that killed more than 240 people.

Since then, 50,000 people have been jailed and another 100,000 teachers, judges, police officers and others have been fired from state jobs. A state of emergency that has allowed Erdogan to effectively rule by decree is set to be extended again when it expires next week.