Relatives and friends cheered the arrest of the alleged mastermind in the murder of environmental lawyer Mia Mascariñas-Green in February.

Lloyd Lancer Gonzaga had been arrested to face murder and frustrated murder charges in Bohol, raising hopes from the victim’s relatives and friends that justice would finally be served.

“Our attention should now be focused on how justice will finally be rendered,” said Pat Ruiz, one of the organizers of Justice for Atty. Mia Kalinaw sa Bohol Movement.

The group was formed by Green’s family, civil society and religious groups, the academe and members of the Integrated Bar of the Philippines-Bohol chapter to press police to solve Green’s murder and other crimes in Bohol.

After four months in hiding, Gonzaga, 34, a resident of Panglao town in Bohol, was arrested on Friday by the Criminal Investigation and Detection Group (CIDG) in Central Visayas.

He didn’t resist as police served six warrants for his arrest.

The warrants were for the murder of Green, four counts of attempted murder for shooting at the lawyer’s children and nanny and illegal possession of firearms.

Green was driving home with her three children and a nanny when waylaid by Gonzaga and another gunman in Tagbilaran on Feb. 15.

The gunman, Romarico Benegi-an, repeatedly shot at Green in front of her children.

The following is a press release from the family of Mia Mascariñas-Green:

The family of Atty. Mia Manuelita C. Mascariñas from Bohol, who was cruelly taken from us on February 15th, 2017  in front of her children, woke up this morning to the solid news that Lloyd Lance Lance Gonzaga was arrested yesterday (June 30th) in an undisclosed place in Davao City.

Initial reports indicate a coordinated PNP manhunt that spanned across the Central Visayas and Mindanao. We were informed that agents of the Criminal Investigation and Detection Group in Central Visayas (CIDG-7), and CIDG-11 with full support from Camp Crane and the Bohol Provincial Director,  Sr. Supt. Felipe Natividad are responsible for this success.

We would like to thank the PNP and the Administration for their tireless efforts to capture this suspect who has been identified by multiple eyewitnesses as being one of two gunman seen at Mia’s murder.  We would also like to thank everyone in the general public who came forward and in particular the close relative of the gunman who came forward and shared the location of the suspect.

We look forward to the arrest of the second gunman Romarico Benigian.  We also look forward to working with the PNP to ensure the safety of all persons involved in the upcoming hearings and court case that will begin soon.
Zia, Zoe and Eli, the Mascariñas and Green Families, Bohol, Philippines

Human rights lawyer Eric Paulsen is demanding that the authorities stop “harassing” lawyers in the course of their duties. This comes after prominent lawyer Siti Kasim was charged with the alleged obstruction of a public servant in carrying out her functions. Paulsen, who is the Lawyers for Liberty’s executive director, said instead of investigating and charging lawyers for performing their roles, the authorities should ensure that international standards such as the United Nations (UN) Basic Principles on the Role of Lawyers are compiled with. Article 16 of the UN Basic Principles on the Role of Lawyers, among others, states that governments must ensure that lawyers are able to perform all of their professional functions without intimidation, hindrance, harassment or improper interference and that they should not be threatened with prosecution or administrative, economic or other sanctions for any action taken in accordance with their duties. “The criminal charge against Siti is a serious attack on the independence of the Bar Council and has enormous ramifications on the rights of lawyers to uphold the cause of justice without fear or favour,” Paulsen told FMT. “Siti was merely performing her role as a lawyer and the public will be adversely affected if lawyers – under harassment and intimidation – begin to fear criminal charges or threats to their safety and security for speaking out.”

Unidentified gunmen have killed a youth leader, identified as Paragi and Mfon Etukudo, a lawyer, in Ukanafun Local Government Area of Akwa Ibom.

Paragi, who hailed from Nkek Village, was said to have been shot dead on Saturday at about 6 p.m. at a barbing saloon at Nkek Urua Uko in Ukanafun.

The Akwa Ibom Police Public Relations Officer, PPRO, Chukwu Ikechukwu, confirmed the killings on Sunday in Uyo in an interview with the News Agency of Nigeria.

He said that the Commissioner of Police, Donald Awunah, and Governor Udom Emmanuel are on their way to visit the scene of the incident.

He said that the remains of the deceased had been recovered and deposited in mortuary for autopsy.

“The Commissioner of Police and the state governor are on their way to the place right now.

“As soon as they are back, details will be made known.

“Right now, policemen are on ground; they are doing everything to restore calm in the area.

“Effort is on top gear to track the killers of the two men. We are not going to relent on our efforts to nab the assailants,” Mr. Okechukwu pledged.

A former presidential candidate, Ali is expected to run again in 2018. But because Egypt’s electoral law disqualifies those sentenced for “crimes that undermine honour”, a guilty verdict would undermine his chances.

Human rights activists have alleged that Ali’s prosecution is politically motivated and part of a larger crackdown by President Abdel Fattah al-Sisi’s administration on potential rivals. At least 35 other political activists from five opposition parties have already been arrested, several for the crime of ‘misusing social media platforms’ or posting political comments online.

Other opposition leaders, such as Hamdeen Sabahi, have called for competing opposition groups to unite against Sisi’s government. But their ability to enact change will be limited by Cairo’s restrictions on freedoms of political expression. 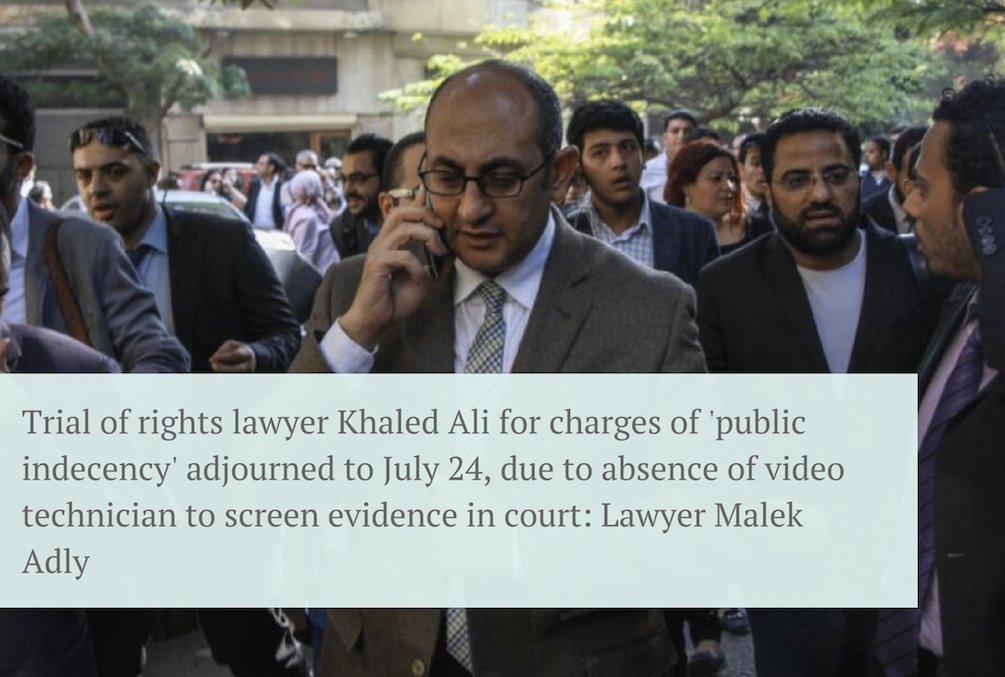