Former Calcutta High Court judge C S Karnan was on Tuesday arrested by West Bengal police from the guest house of a private college in Tamil Nadu’s Coimbatore district. This comes a week after he retired from service. He was sentenced by the Supreme Court to six months jail term for contempt of court and had not been seen in public since then. He also became the first high court judge to have retired as a fugitive.

According to a top police official, Karnan had resisted the arrest and argued with the police before he was eventually taken into custody. “We have arrested former high court judge Karnan from south India,” a senior officer of the CID said. According to PTI, Three police teams from Kolkata were camping in Coimbatore for the past three days and traced him on the basis of his mobile phone calls. He will later be taken to Kolkata, the police said.

Earlier this month, the apex court had declined the 62-year-old’s plea seeking a stay on his conviction in a contempt of court case. The matter was mentioned before a vacation bench of justices Ashok Bhushan and Deepak Gupta. The bench had refused to interfere with the order or conviction.

Justice Karnan arrested: Here are all his controversies

Justice CS Karnan arrested from Coimbatore: Timeline of events leading to his arrest

(Vu Minh Khanh (C) holds an image of her husband Nguyen Van Dai during a mass prayer for Dai and his assistant in Hanoi, 27 December 2015. Dai was badly beaten by unknown attackers and subsequently arrested for anti-state “propaganda”)

This statement was originally published on hrw.org on 18 June 2017.

Vietnamese bloggers and rights activists are being beaten, threatened, and intimidated with impunity, Human Rights Watch said in a report released today. The Vietnamese government should order an end to all attacks and hold those responsible accountable. Donor governments should tell the Vietnamese authorities to end the crackdown, and that repressing internet freedom, peaceful speech, and activism will carry consequences.

The 65-page report, No Country for Human Rights Activists: Assaults on Bloggers and Democracy Campaigners in Vietnam, highlights 36 incidents in which unknown men in civilian clothes beat rights campaigners and bloggers between January 2015 and April 2017, often resulting in serious injuries. Many victims reported that beatings occurred in the presence of uniformed police who did nothing to intervene.

“It’s bad enough that activists in Vietnam have to risk prison for speaking out, but now they have to risk their safety on a daily basis simply for exercising their basic rights,” said Brad Adams, Asia director at Human Rights Watch. “The Vietnamese government needs to make it clear that it will not tolerate this kind of behavior and bring to an end this campaign against rights campaigners.”

Activists have also been beaten after participating in public events, such as pro-environment protests, demonstrations to call for the release of fellow activists, or human rights-related events. In December 2015, rights campaigner Nguyen Van Dai went to give a talk about human rights and the constitution at a parish in Nam Dan district (Nghe An). As Nguyen Van Dai and three fellow activists were leaving the area, a group of men wearing surgical masks stopped their taxi, dragged them out of the car, and beat them. 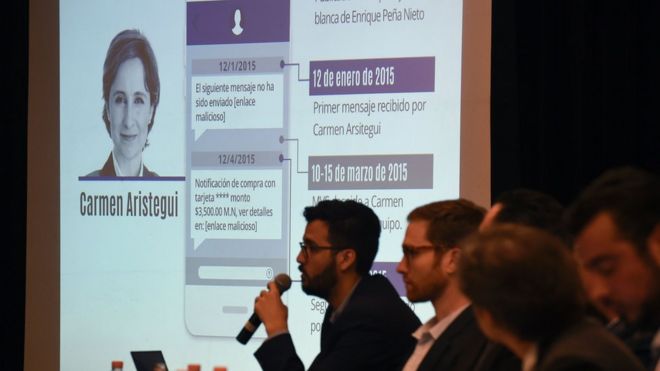 Several prominent journalists and activists in Mexico have filed a complaint accusing the government of spying on them by hacking their phones.

The accusation follows a report in the New York Times that says they were targeted with spyware meant to be used against criminals and terrorists.

The newspaper says messages examined by forensic analysts show the software was used against government critics.

The report says that the software, known as Pegasus, was sold to Mexican federal agencies by Israeli company NSO Group on the condition that it only be used to investigate criminals and terrorists.

The software can infiltrate smartphones and monitor calls, texts and other communications, the New York Times said. It can also activate a phone’s microphone or camera, effectively turning the device into a personal bug.

But instead of being used to track suspected criminals, the targets allegedly included investigative journalists, anti-corruption activists and even lawyers.

Tension prevailed near Light House Railway station today when a Madras High Court advocate was stabbed by a gang.

Kesavan was a resident of Loyd’s Road in Triplicane. He was living with his wife and two children.

He was returning on his bike after dropping his daughter at school. While the advocate was nearing the light house railway station, he was intercepted by five men, who came on three bikes.

Kesavan lost balance of his vehicle and fell down. The gang immediately took their weapons out and stabbed him.

Shocked by the incident, public raised alarm and came to Kesavan’s rescue.

The gang immediately dropped the weapons and fled the scene. The advocate, who was severely injured, was taken to a private hospital in Thousand Lights for treatment.

The police are collecting CCTV camera footage to identify the men, who assaulted Kesavan.

Police sources also doubt the involvement of any of Kesavan’s clients. A case has been registered and further investigations are on.

A year ago this month our colleague Willie Kimani, his client Josephat Mwendwa and taxi driver Joseph Muiruri were brutally murdered. Willie was tortured to death while in the course of duty. This month we remember Willie, Josephat and Joseph as we continue to condemn extra judicial killings.

In memory of Willie, Josephat and Joseph, the Law Society of Kenya together with IJM has organised a week long series of activities that will commence with a memorial Mass at the Consolata Shrine in Westlands Nairobi this Friday 23rd June 2017 from 9am. This will be followed by a public dialogue and memorial vigil at Uhuru Park from 12pm upto 8pm on the same date.

We urge you dear colleagues to kindly attend the Mass and the public dialogue and memorial vigil in memory of our colleague and to also participate in other activities that have been planned across all LSK branches between 23rd June upto 30th June 2017 as communicated in the LSK Newsletter and as shall be updated from time to time. Let us stand in solidarity for justice and the rule of law.

A UN judge found guilty in his native Turkey of membership of a terrorist organisation has resumed work on a stalled Rwanda genocide appeal while waiting for his own appeal to be heard.

Judge Aydin Sefa Akay, who sits at the Mechanism for International Criminal Tribunals, was sentenced to seven years and six months last week for membership of the ‘Gulenist Terrorist Organisation’ (FETO). FETO’s existence is insisted on by Turkish officials. He has been provisionally released on ‘humanitarian’ grounds.

Akay’s passport is ‘forfeit’ and he may not leave Turkey, but now that the UN court and its judges are in direct contact with Akay, it has resumed its work on Augustin Ngirabatware’s appeal against a 30-sentence for crimes that include organisation of a genocide.

The court’s first decision since Akay’s detention last September was to grant the defence’s request for a review of the original judgment. A spokesperson for the Mechanism for International Criminal Tribunals (MICT) told the Gazette: ‘The mechanism’s understanding is that Judge Akay is confined to Turkey but… he has confirmed his ability and willingness to exercise his judicial functions in the Ngirabatware case.’

All of the judges on the bench, the spokesperson added, are currently carrying out their duties remotely apart from the president, judge Theodore Meron. Following Akay’s release from detention Meron consulted with Judge Akay, who confirmed his ability and willingness to exercise his judicial functions.