On a social media post she made last month after she finally regained her freedom, Li Shiyun said she was “brutalized” in prison by Chinese jail authorities, China Aid reported.

Li said she was kidnapped and arrested by Chinese authorities on July 10, 2015 as part of a nationwide crackdown on human rights attorneys.

For six months, she was locked up and isolated in a dark cell. She was then transferred to another detention facility.

Li said she was drugged during her time in jail. China Aid says this is a method of torture commonly used against arrested human rights lawyers.

She was also forced to stand still for 16 hours and chained to a chair designed as a torture device for a week, with the guards not allowing her to move.

Moreover, she was made to sleep “head-to-head” with a criminal who had been sentenced to death.

On Wednesday, Special Rapporteur Philip Alston praised China’s political will to alleviate poverty and took the government to task for limiting his access and intimidating and, in one case, imprisoning civil society actors with whom he met. ISHR’s statement asked for answers.

UN Special Rapporteur on Extreme Poverty presented his country report on China this week, in addition to reports on visits to Mauritania and Saudi Arabia and a discussion of universal basic income. Unsurprisingly, despite Alston’s balanced tone, the Chinese delegation chose to attack the Rapporteur’s credibility, deny the practices he described, and hide behind tired claims that China is a ‘rule of law country’ and that the Rapporteur’s inquiry into the case of detained human rights lawyer Jiang Tianyong constituted ‘meddling in judicial sovereignty‘

The report itself raised serious concerns about the commitment to human rights in poverty alleviation, and focused particularly on the lack of effective accountability mechanisms across the legislative, executive and judicial branches of government. ISHR has previously highlighted key findings in the report.

ISHR advocate Sarah M Brooks noted that the Special Rapporteur clearly viewed civil society as key to making his work, and indeed the work of the UN, meaningful. And civil society groups in the room supported him, echoing his message for an end to the crackdown and the release of lawyer Jiang. ISHR’s statement is copied below.

‘The Special Rapporteur took a courageous and principled stand to call out China’s failures to protect human rights’, says Brooks. ‘It is downright shameful that no other country in the room could do the same.’ 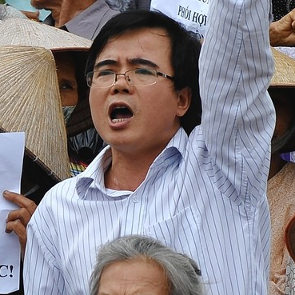 On 8 June 2017, a group of ten plainclothes agents went to the private residence of human rights defender Le Quoc Quan in Hanoi and prevented him and his family from going out. They threatened to kill him, his wife and his three daughters if he continued to work for human rights and multi-party democracy.

Le Quoc Quan is a Vietnamese human rights lawyer, democracy activist and Catholic blogger. Prior to his imprisonment in 2012, he ran a blog where he wrote about various issues including civil rights, political pluralism and religious freedom. As a lawyer, he represented many victims of human rights violations, before being disbarred in 2007 on the fabricated suspicion of engaging in “activities to overthrow the regime”. In 2013 Le Quoc Quan was sentenced to two and a half years in prison on a false charge of tax evasion.

On 8 June 2017, a dozen plainclothes officers surrounded Le Quoc Quan’s home in Hanoi and threatened to kill him and his family if he did not stop his human rights work. The incident came one week after Le Quoc Quan met with visiting U.S. Senator John McCain and other members of a delegation of the U.S. Senate Committee on Armed Services, during which he reported the intensified political crackdown currently being carried out in Vietnam. Le Quoc Quan reported the threats against him to the police station of Yen Hoa, Cau Giay District, Hanoi.

The song aims to re-ignite and expand public debate on the need to have a radically transformed police service in Kenya. The song is meant to inspire a powerful movement that generates police reforms.

The ICJ welcomed today the Special Rapporteur’s report on Turkey and his preliminary findings on his visit to the country last November.

The ICJ welcomes and concurs with the finding that the “situation of the judiciary is undermining freedom of opinion and expression”.

Mass dismissals of judges have had a devastating effect on the judiciary’s independence, already weakened by the current state of emergency. Furthermore, we are concerned at the claim by the President that the state of emergency will remain in place until Turkey reaches “peace and prosperity”.  Whatever other questions there may be about their validity, maintaining emergency derogations to human rights law instruments for such an open-ended period would clearly not be in line with international law.

The ICJ is also concerned at the constitutional amendments approved on the 16th of April by a referendum. Among other things, the amendments have given powers to the President and the Parliament to appoint all the members of the High Council of Judges and Prosecutors, the body tasked with protecting the independence of these professions.

Thailand: Thailand’s junta intensifies its hunt for critics of the monarchy 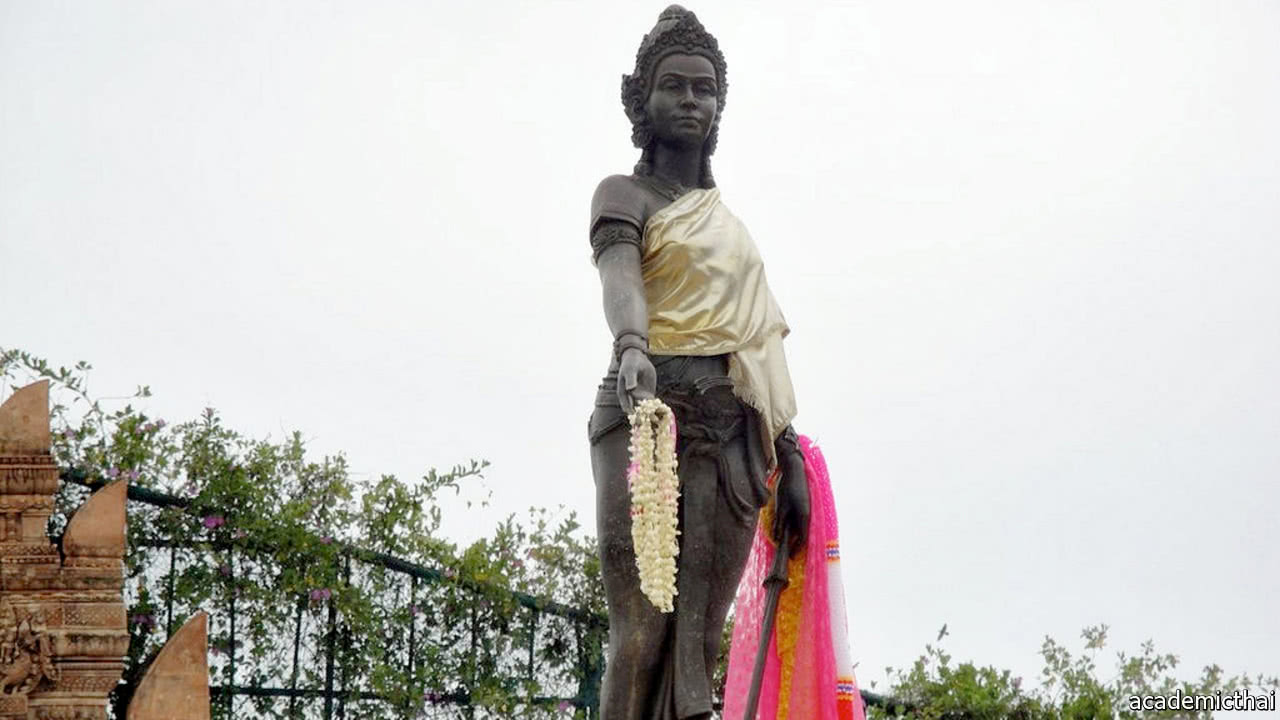 THE only historical record of Queen Chammathewi, the legendary founder of the Thai city of Lamphun, comes from a fanciful 15th-century chronicle written on palm leaves in an ancient liturgical language. It describes how, some time in the seventh century, she came to a spot that the Buddha had supposedly visited centuries before. With the help of a Buddhist ascetic, she conjured a city out of the jungle, subjugated the natives and begat not one, but two royal dynasties.

There is no proof that the queen (pictured) ever really existed, and she definitely falls outside the scope of Thailand’s law on lèse-majesté, which bars criticism only of the reigning king, queen, heir apparent and regent. But Thais should not feel they can say whatever they want about her. So, at least, a provincial court implied last month when it convicted a local of disseminating false or illegal material online for posting a lascivious comment about her on Facebook.

At least 105 people have been detained or are serving prison sentences for lèse-majesté, compared with just five under the elected government the junta overthrew in 2014. Many of them posted critical comments about the royal family on social media; some simply shared or “liked” such comments. Other arrests have been on even pettier grounds. Jatupat Boonpattararaksa, a student activist, is on trial for sharing a profile of King Vajiralongkorn published by the BBC’s Thai service. Police have warned that those agitating for his release could themselves face charges. A well-known academic, Sulak Sivaraksa, remains under investigation for several instances of lèse-majesté, including questioning whether a 16th-century battle involving a Thai king really took place.

This month security forces arrested Prawet Prapanukul, a human-rights lawyer best known for defending lèse-majesté suspects. He risks a record 150 years in jail if convicted of all ten counts of lèse-majesté he faces. Several recent sentences for insulting royals have exceeded 50 years; the standard for murder is 15-20 years.

We are very concerned by the rise in the number of lèse majesté prosecutions in Thailand since 2014 and the severity of the sentencing, including a 35-year jail term handed down last Friday against one individual. A Thai military court found Wichai Thepwong guilty of posting 10 photos, videos and comments on Facebook deemed defamatory of the royal family. He was sentenced to 70 years in jail, but the sentence was reduced to 35 years after he confessed to the charges.

This is the heaviest sentence ever handed down under Article 112 of the Criminal Code, which is also known as the lèse majesté law. The previous heaviest sentences were handed down in 2015, when three people were jailed for between 25 and 30 years by military courts on the same charges. The offence carries a penalty of three to 15 years in jail for each charge of insulting the monarchy.

Statistics provided by Thai authorities show there has been a sharp fall in the number of people who have been able to successfully defend themselves against lèse majesté charges. From 2011-13, around 24 percent of people charged with the offence walked free, but over the next three years, that number fell to about 10 percent. Last year, that figure was only 4 percent.

While our Office appreciates the complexity and sensitivity of the issue surrounding lèse majesté in Thailand, we are deeply troubled by the high rate of prosecutions and the courts’ persistence in handing down disproportionate sentences for the offence. All people have the right to freedom of expression, including when it comes to criticising public figures. Imprisonment of individuals solely for exercising the right to freedom of expression constitutes a violation of Article 19 of the International Covenant on Civil and Political Rights (ICCPR), which Thailand acceded to in 1996. In March 2017, the UN Human Rights Committee, which reviews implementation of the ICCPR, concluded that Thailand should review Article 112 of the Criminal Code to bring it into line with Article 19 of the Covenant.

We also have concerns about the conduct of the trials since the military coup of 2014. Most of the lèse majesté cases have been tried before a military court, and the hearings have been closed to the public. Most of the accused have been denied bail and some held for long periods in pre-trial detention. While we welcome the Government’s decision in September 2016 to cease hearing future lèse majesté cases in military courts, we reiterate our call to authorities to apply this is to all pending cases, retroactively.

Our Office calls on the Thai Government to immediately amend the lèse majesté law to bring it in line with international human rights standards and to review all cases brought under Article 112 of the Criminal code. 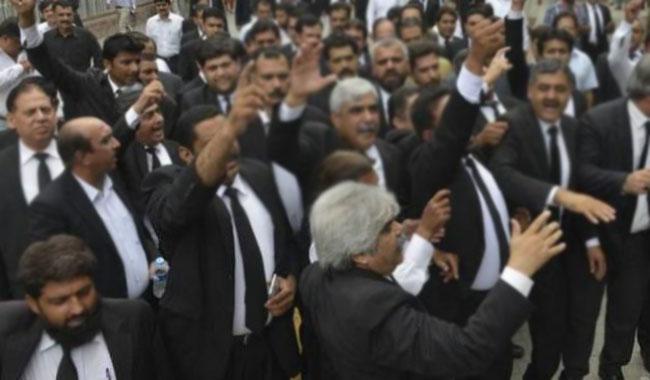 The lawyers on Monday boycotted the court proceedings against the attack on their colleague in a clash between a litigant and a court employee. It was learnt that a court employee Islamuddin Piyada clashed with a retired deputy superintendent of police (DSP) Habibur Rahman on the court premises as he came out of the courtroom after appearing in a case against him.

The litigants and lawyers present on the occasion tried to disengage the two and end the fighting in which a lawyer Altaf Gohar suffered a punch on his face. Following the incident, the lawyers staged a protest and boycotted the court proceedings. Later, the office-bearers of the District Bar Association at a meeting demanded an appropriate action against Islamuddin and announced boycott.