On 2 June 2017, human rights defender, Sultana Kamal, was publicly threatened with arrest, exile and violence by radical group Hefazat-e-Islam Dhaka City Committee, who willfully misrepresented the comments she made during a talk show broadcast on the private news channel News 24.

Sultana Kamal is a human rights defender and lawyer known for her work on civil and political as well as gender rights. She served as the Executive Director of Ain o Salish Kendra (ASK), a legal aid and human rights organisation in Bangladesh for over 15 years. In addition to that, she is the Chairperson of the We Can End Violence Against Women Alliance, Chairperson for Transparency International Bangladesh and also Co-chairperson for the Chittagong Hill Tracts Commission.

In its recent investigative report, Front Line Defenders found Bangladeshi authorities systematically refuse to investigate attacks, killings and threats against human rights defenders, and called the country a “lethal environment for HRDs who advocate for human rights-related reforms to which those pushing a fundamentalist Islamic agenda are opposed.”

On 2 June 2017, Hefazat-e-Islam Dhaka City Committee called for the arrest of Sultana Kamal and threatened her with violence following a TV show in which she participated. Discussing the removal of a sculpture representing Lady Justice from the Supreme Court premises, Sultana Kamal argued with Hefazat-e-Islam representative, Mufti Sakhawat Hossain, that if the group’s position was that no religious edifice should be put in the court premises, by the same argument the mosque that is inside the premises should not be there either. After the talk show, Hefazat’s Vice-President Junayed Al-Habib claimed Sultana Kamal had called for the removal of all mosques from the country and demanded her arrest within 24 hours. Members of the organisation threatened her with violence and said she would share the same fate as author, Taslima Nasrin, who has been in exile since 1994 due to her human rights advocacy. Dhaka Metropolitan Police Ramna Division and the Detective Branch declared on 5 June they had taken joint measures for providing protection to Sultana Kamal. However, the human rights defender said that the law enforcement agency merely spoke to her and said that they are keeping a close eye on her neighborhood as part of their protection effort.

The violent act comes as the leftist party seeks a recount in the recent vote for governor in the state of Mexico.

In the wake of key elections in the state of Mexico and three other Mexican states, a lawyer representing the left-wing Morena party allegedly has been murdered by police, the party reported, bringing the death toll of people from the party to 17.

Eduardo Catarino Dircio was shot and killed in Tixtla, in the violence-ridden state of Guerrero, according to a Morena statement released Monday. Catarino was a lawyer for Morena, the up-and-coming progressive party headed by one of Mexico’s most well-known politicians, Andres Manuel Lopez Obrador.

The party stated that Catarino had taken shelter inside his home with his family after a shooting took place on the street when state police forces entered his home and executed him in front of his wife and children, placing an AK-47 rifle next to him.

“These acts of violence are part of the terror strategy of local and federal governments to intimidate Morena’s progress in the different states ahead of the federal election of 2018. We will not be intimidated and persist in our peaceful struggle,” the party stated. 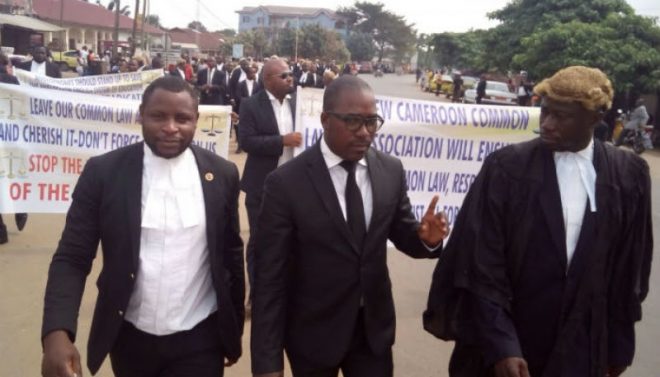 The trial in Cameroon of a prominent lawyer and human rights activist and some two dozen other defendants has again been adjourned after a military tribunal in Yaounde denied them bail.

Their next court date is scheduled for June 29, according to local media reports.

Nkongho Felix Agbor-Balla, leader of the Anglophone Civil Society Consortium, was arrested in January when the government under President Paul Biya outlawed the group. Consortium co-leader Dr. Fontem Neba also was arrested, along with a third Anglophone activist, Mancho Bibixy, who was arrested after making a public speech in November.

Those arrests came as the Anglophone movement was gaining traction among lawyers, doctors and other professionals seeking to address the political and social marginalization they say that Cameroon’s English-speaking citizens experience in the predominantly Francophone West African nation.

Those longstanding divisions arise in part from the colonial legacy of the West African nation. Authorities in Cameroon also have interfered with journalists and Internet access, and the situation has drawn the attention of the international community as well as human rights groups.

UPDATE JUNE 8: Justice AYAH’s son has been released, but no explanation for his arrest given.

Following the bail denial today at the Yaounde Military Court, I want to thank you all both home and abroad for the support towards all detainees, lawyers and teachers. Equally, I urge you all to remain strong and courageous despite the challenges as the struggle continues. #FreeAllArrested #Cameroon

Renowned Human Rights Lawyer, Francis-Xavier Sosu has appealed a 3-year ban imposed on him by the General Legal Council (GLC) from practicing as a lawyer.

He believes the ban is unfair, and thus has appealed to the Court of Appeals to challenge the reasons given by the GLC that led to his ban.

According to the notice of appeal, he is dissatisfied with the decision of the GLC in respect of a charge over estimation of legal fees and believes the GLC erred in their decision.

In a suit filed at the Court of Appeal on Wednesday June 7, he expressed his displeasure with accusations by the council that he overcharged legal fees.

Lawyer Sosu is also dissatisfied with the decision by the GLC in respect of touting and personal advertisement and thus see it as a miscarriage of Justice.

The United States on Wednesday expressed “deep concern” about the recent detention of Taner Kılıç, the chair of Amnesty International Turkey, as part of a witch-hunt targeting people linked to the Gülen movement.

“The United States is deeply concerned by the recent detention of Taner Kiliç, Chair of Amnesty International Turkey — the latest in a series of respected human rights defenders, journalists, academics, and activists detained in Turkey,” US State Department Spokesperson Heather Nauert said in a statement.

Underlining that these detentions, often with little evidence or transparency, are an alarming trend, Nauert said: “We are closely following these cases, and underscore the importance of respect for due process and individual rights, as enshrined in the Turkish Constitution and consistent with Turkey’s own international commitments.”

Nauert repeated the US position that “persistent curbs on free speech and other freedoms erode the foundations of democratic society.”

“Turkey benefits from having more engaged voices, not fewer. The detentions of individuals such as Mr. Kilic chill public debate and undermine the quality of democracy.”

Kılıç was detained at his home in the western Turkish city of Izmir along with 22 other attorneys. 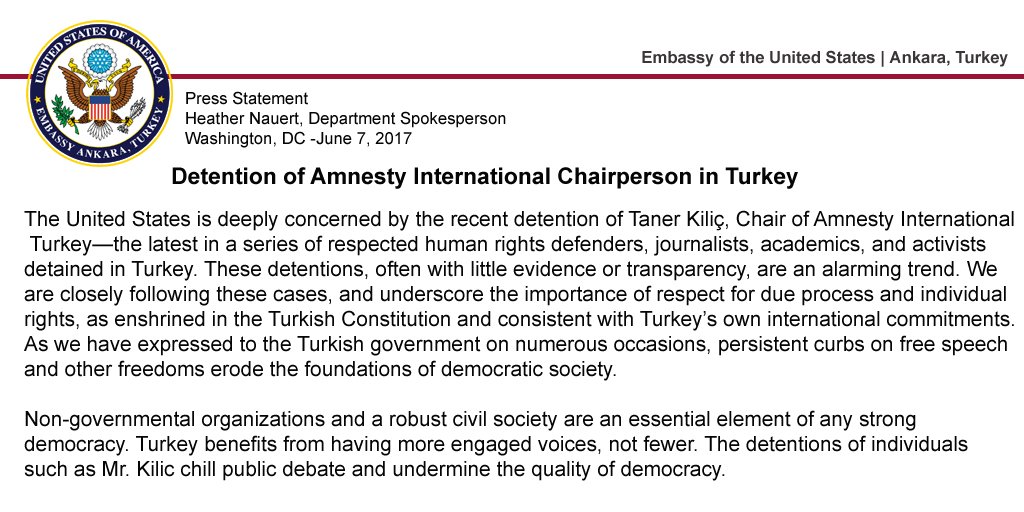 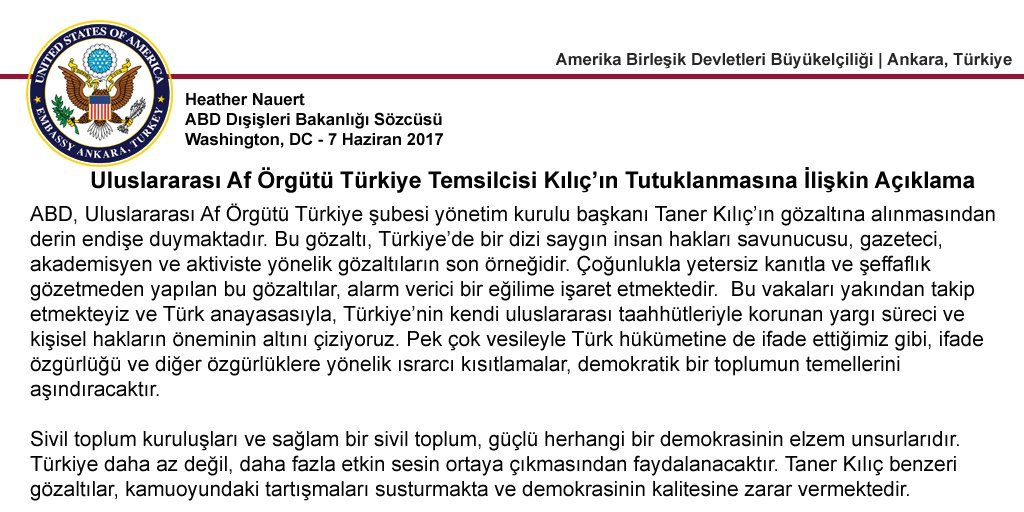 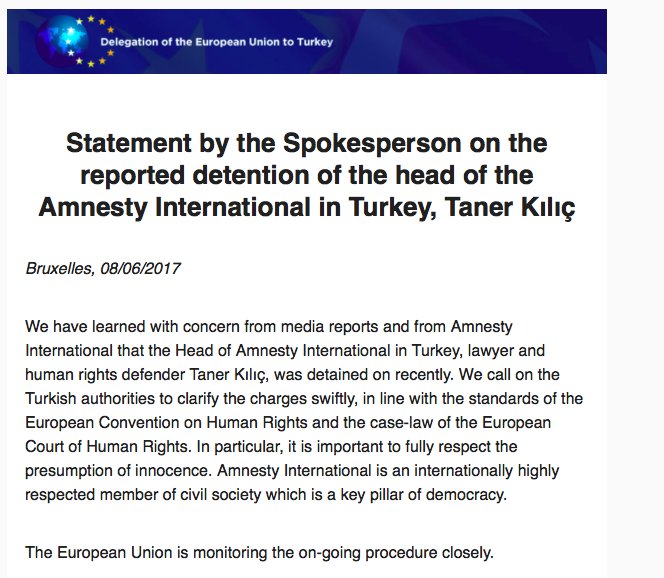