PRESIDENT XI JINPING of China has been tireless in stamping out dissent. He has demanded that journalists, charities and university professors, among others, bow to the supremacy of the Communist Party. He told journalists for party organs that they must show absolute loyalty and “have the party as their family name.” Mr. Xi seems particularly eager to keep a firm hand on the reins of power before this year’s key meeting of the Chinese Communist Party to seal his second five-year term.

One of the most vicious campaigns has been the so-called war on law, using arrests, detentions and show trials to punish lawyers who have courageously defended human rights victims in recent years. The crackdown was launched in July 2015, and more than 250 people were detained. Among them was Li Heping, a prominent lawyer who had defended Chen Guangcheng, the blind legal advocate and rights champion, as well as villagers evicted from their homes and practitioners of Falun Gong, a religious discipline banned by the Chinese authorities.

After nearly 22 months in prison during which he was reportedly tortured with electric shocks, Mr. Li was tried April 25 in the port city of Tianjin. The court announced April 28 that he had been convicted of “subversion of state power”for, among other things, using the foreign media and his postings on social media to “smear and attack state organs and the legal system.” He was given a three-year prison sentence, with a four-year reprieve, meaning he will have the convictions hanging over him.

In what can be called as grave threat to the judiciary and law and order of the country, a Supreme Court lawyer who is representing the family of Irom Rogers, who was killed by Manipur Chief Minister N Biren Singh’s son N Ajay Meetei, has received death threats from People’s Liberation Army of Manipur (PLA).

In a letter written to the Home Secretary of India, the lawyer has said, ‘This is to bring to your goodself’s notice that I am engaged as a lawyer by the family of Iron Roger’s for filing an appeal in the Manipur High Court situated at Imphal and for filing a petition in the same matter at the Supreme Court of India against the son of the present Chief Minister N. Biren Singh. Consequently, I had visited Imphal for the same from 17th March, 2017 until 19th March, 2017.’

Later, when I returned back from Manipur, I received calls on 22nd March, 2017 at around 3:30 am in the morning. The person who spoke in broken English with a Manipur accent, said that he’s calling from PLA, Manipur and NSCIM and that I shouldn’t go ahead with the case of Irom Rogers, who was murdered by the son of the present Chief Minister N. Biren Singh. I couldn’t understand what was PLA or NSCIM during the call but later when I searched for both on google, I came to know that PLA is terror organization operating in the North East but couldn’t find clarity as to NSCIM. Later during the day (22nd March), I informed Superintendent of Police (CID) Imphal, Manipur about the threatening calls.

Chinese human rights lawyer Xie Yang may have been officially released “on bail” after pleading guilty to subversion charges at a court in Hunan, but his wife says that, far from regaining his liberty, he is now under house arrest in a secret location. Chen Guiqiu, who narrowly escaped repatriation with the couple’s two daughters after seeking
asylum in Bangkok, told RFA’s Mandarin Service that the best she can do is raise their children in a free country:

RFA: We heard that Xie Yang has been released. Have you been in touch with him?

Chen Guiqiu: He may have been let out of jail, but he hasn’t really regained his liberty. I had a very brief phone conversation with him, but he said it was very inconvenient to talk then, and I haven’t heard from him since. He isn’t genuinely free. I told him that we’re all fine here in the U.S. He was using someone else’s cell phone that a state security police officer had taken from someone. He is with his parents right now. I don’t know where the state security police have taken him. He’s been ‘disappeared,’ just like a lot of the other July 2015 people. He’s not free. They are pretending to set him free. It’s a joke; I want to make that very clear. He must be under unimaginable pressure.

RFA: So what do you think his status is right now?

Chen Guiqiu: It’s very common for people detained in the July 2015 crackdown on lawyers to wind up detained in a secret location, accompanied by state security police at all times.

The German Federal Bar (BRAK) and the German Bar Association (DAV) have voiced criticism with respect to the trial against Chinese human rights defender and lawyer Xie Yang. The trial raises serious concerns as to its conformity with international standards of rule of law.

„It is not in accordance with standards of rule of law to start the main hearing of criminal proceedings directly following the assignment of a defence lawyer to Xie Yang. This is rendering proper criminal defence almost impossible“, says the DAV President, Rechtsanwalt und Notar Ulrich Schellenberg. The human rights defender and lawyer Xie Yang had been detained since summer 2015. On Monday, the trial’s main hearing has been started in Changsha, in the central province of Hunan, China. Xie Yang is indicted for “inciting subversion of state power”. After his defence lawyer has been arrested just before the main hearing taking place, the court appointed an official-defence counsel for him.

„We have considerable reason to believe that Xie Yang’s case is used for providing a cautionary example. It is an unsettling coincidence to see the trial starting just now“, summarises the President of the German Federal Bar, Ekkehart Schäfer.

The Advocate General at the Supreme Court and President of the Popular Action Party, PAP and Chief Justice Ayah Paul Abine has reiterated that he has always acted within the ambit of the law and will forever do so.

In an outing through his Facebook page early Wednesday, May 10, 2017 Justice Ayah said despite his incarceration, he has remained steadfast but is still waiting to be told what his crimes were.

Ayah Paul writes, “As I commemorate over 110 days under illegal detention at SED (in complete ignorance of why I am here; for I am yet to be told what my crimes are) following my abduction from my residence at biyem-Assi Yaounde, I have a word for all Cameroonians who care:

””MY MORALE IS EXCEEDINGLY HIGH! FOR I AM AT PEACE WITH MYSELF AND WHOLLY SATISFIED THAT I HAVE FOUGHT (AS I KEEP FIGHTING) A GOOD FIGHT; WITH INTEGRITY, IN ALL HONESTY, IN TRUTH, AND ABOVE ALL, WITHIN THE LAW. AND SO ONWARD I MARCH AND SHALL SO DO TILL THE END; WITH INSPIRATION FROM THE HOLY SCRIPTURES THAT; Whoever Holds on till the end shall be saved””

The Most High God has a Divine mission for me. Therefore, I shall not die unless HE so permits. I shall live; to accomplish it and to tell of the goodness of the Most High God in the land of the Living. I have always acted within the law and shall forever so do. 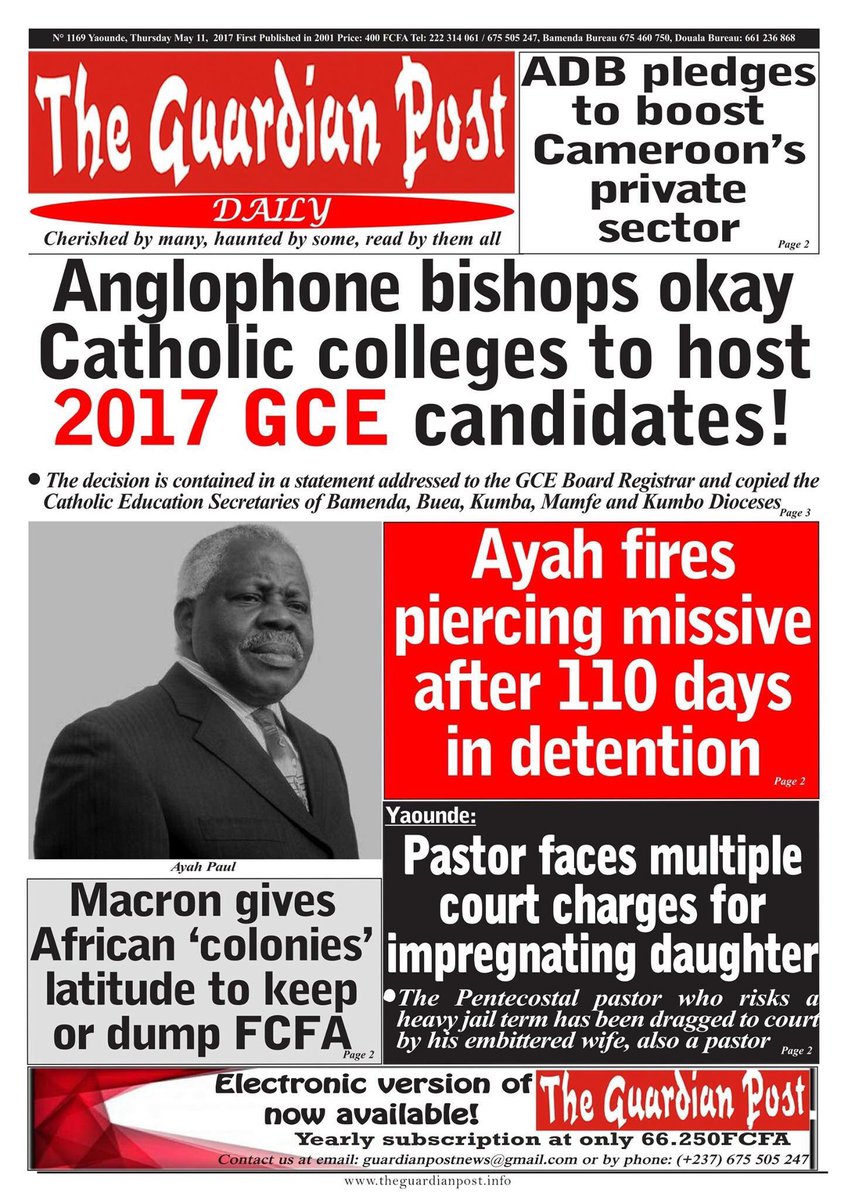 Gianni Pittella, President of the Progressive Alliance of Socialists and Democrats (S&D) in the European Parliament, is going to start a two-day visit to Turkey on Thursday, where he will also attend the trial of pro-Kurdish Democratic Peoples’ Party (HDP) Co-chair Selahattin Demirtaş, who  has been jailed since November of last year.

Expressing full solidarity and support for “the sister parties” CHP and HDP, the S&D called on the two parties to put aside their differences and stand together for democracy in Turkey against any attempt to turn the country into an authoritarian regime, distancing it further from Europe.

“The S&D Group has always and will continue to work for constructive relations with Turkey. We would have liked to keep Europe’s doors to Turkey open. Unfortunately, the referendum called by [Turkey’s autocratic President Recep Tayyip] Erdoğan has forced us to request the suspension of the accession negotiations. The way the amendments to the constitution will be now implemented will turn out to be crucial for the future of the EU-Turkey relations,” the statement said.

Pittella will also hold a press conference in Ankara at 5.30 p.m. on Thursday.