China: ‘She Has Already Partly Lost Her Liberty’

The wife of a Chinese rights lawyer detained on subversion charges during a nationwide police operation that launched in July 2015 has warned that she may be the next family member of a lawyer to be “disappeared.”

In a message sent to Human Rights in China (HRIC), Li Heping’s wife Wang Qiaoling said surveillance cameras have now been installed right in front of her apartment building, and that she is continually followed by state security police and unidentified personnel wherever she goes.

“The appearance of this cluster of cameras unnerves me, and I can’t help feeling frightened because no policemen had watched me even during the [annual parliament last month], and now I’m being tracked by cameras,” Wang, recipient of the 2016 Franco-German Prize for Human Rights, said in a statement translated by HRIC and posted on their website.

“These days, family members, lawyers, and friends are continuously telling me things like: ‘You’re in great danger,'” Wang wrote, adding that state security police had told a friend of hers that “she will definitely be detained because she has a political history.”

Others were warned that they should cut off contact with Wang, because she had “crossed so many red lines.”

“The cameras are staring at me; and there are several hefty guys … tailing me,” Wang wrote.

A woman lawyer was subjected to brutal beating by a mother-daughter duo in Delhi’s Rohini area for her efforts against illegal encroachment.

In a video which has surfaced online after the incident, there is a full account of the physical abuse of the advocate, Anu Jain, by the two women who are her neighbours.

A report by The Logical Indian details the circumstances under which the incident came to pass. The woman in question is a lawyer who had petitioned the Delhi High Court against illegal encroachments by her neighbours on public property. The Court had ordered demolition of the encroachments when the two neighbours decided to take matters into their own hands and assaulted Jain using iron rods.

The video of the assault was recorded by Jain’s 12 year-old son.

The report also mentions that an FIR against the perpetrators of the alleged crime has been lodged in the local police station.

The Lahore High Court Bar Association said on Friday that it will take action against any lawyer who extends his services to Indian national Kulbhushan Jadhav, who has been sentenced to death+ by a Pakistani military court.

“The LHBA has unanimously decided to cancel the membership of any lawyer who offers his services to Indian spy Kulbhushan Jadhav,” Lahore High Court Bar Association secretary-general Amer Saeed Raan said after a meeting of the bar on Friday.

He said the bar has asked the government not to bow to any foreign pressure in the case of Jadhav+ .

“India has declared Jadhav its son and is putting pressure on the Pakistani government for his release. We demand that the Indian spy who is involved in playing with lives of Pakistanis should not be spared and the government (should) ensure his hanging,” he said.

Meanwhile, Indian high commissioner in Islamabad Gautam Bambawale will be meeting Pakistan foreign secretary Tehmina Janjua in connection with the case of Jadhav. 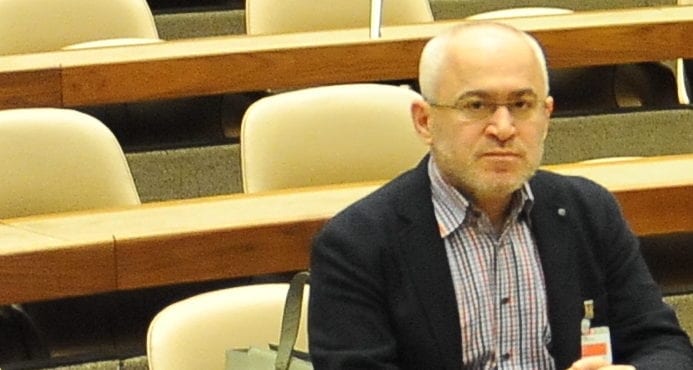 “By indicting a peaceful journalist, lawyer and human rights defender—without a shred of evidence—the Turkish government is in breach of its United Nations and international human rights obligations,” said Hillel Neuer, executive director of UN Watch. “We urge Secretary-General Gutteres and High Commissioner Zeid to speak out today.”

Mr. Cengiz visited the UN Human Rights Council in February 2016, and testified about human rights abuses in Turkey, hosted by the Geneva Summit for Human Rights, a coalition of 25 human rights groups including UN Watch.

United Nations Watch, a non-governmental human rights organization in special consultative status with the United Nations, urges you to intervene with Turkey concerning its latest arbitrary acts targeting Mr. Orhan Kemal Cengiz, a human rights lawyer and journalist. His case is a compelling example of how the Turkish judiciary is being used by the Erdogan regime to intimidate human rights defenders, journalists and intellectuals.

Erdogan Goes for the Death Blow Against Turkey’s Bureaucracy