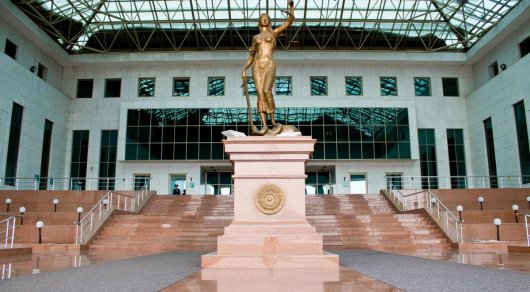 “Lawyers are suing a court. Without too much hope of winning, we see this as the only way of protecting our interests” says Sergey Sizintsev, the Executive Director of the Kazakhstan Republican Bar Association.

This unprecedented move is a result of a Resolution which was adopted in December of last year by Kazakhstan’s Supreme Court. The Resolution states that in cases where a lawyer learns about his client preparing a new criminal offence and gives them advice, or provides other legal assistance to the client, the advocate is liable as an accomplice to the acts committed by their client.

The provision, depending on its interpretation and application, opens doors for various possible actions, measures or sanctions against lawyers in Kazakhstan. Feeling at a substantial disadvantage already, Kazakhstani lawyers fear the Resolution will only add to a current strong misbalance between the parties, threaten their independence and violate the rights of their clients.

38-year-old lawyer Yevgeny Rusakov, who represented the murderer of State Duma deputy Galina Starovoytova, was found shot in the village of Vyritsa, Gatchina District of the Leningrad Region. As reported by RIA Novosti, this information was confirmed by a representative of the regional Investigative Committee.

The lawyer’s body with a gunshot wound in the chin was discovered on April 10 in the apartment in a building on Sosnovaya Street in the village of Vyritsa, Gatchina District. The deceased was lying on the couch, and in his hand there was a pistol of the Czech brand PODNIK. An empty case was found near the body.

The investigators found that on April 9 Rusakov, while in a state of intoxication, caused an accident on a Lexus when he approached his house. After that, the lawyer left the scene and went home.

Yevgeny Rusakov was the defender of Vitaly Akishin accused of the murder of State Duma deputy Galina Starovoytova. In June 2005, Akishin was found guilty and sentenced to 23.5 years in prison.

Galina Starovoytova was killed in the entrance hall of her house in St. Petersburg on November 20, 1998. Yuri Kolchin and former State Duma deputy Mikhail Glushchenko were also convicted in the case.

Beginning in July 2015, over 250 Chinese rights lawyers, law firm staff, activists, and their relatives were detained by public security agents in China. The event was later dubbed the “709 Crackdown” (“709大抓捕”), marking when the first lawyer disappeared on July 9, 2015. In January 2017, an attorney of one of the detained rights lawyers issued transcriptions of a meeting with the detainee, detailing torture during police interrogations. Concerned citizens have taken to WeChat and Sina Weibo, two of the most popular social media platforms in China, to advocate for these lawyers and rights defenders.

This report is a continuation of research documenting content filtering on WeChat and Sina Weibo. Censorship on these platforms is dynamic and often reactive to news events.

Through a series of tests we found content related to the “709 Crackdown” blocked on both platforms. This censorship is implemented in ways that are not transparent to users, a continuation of trends we have seen in past research. Additionally, we provide evidence of images related to the event filtered on WeChat in both chat and WeChat Moments. This finding is the first documentation of image filtering on the app. Similar to keyword filtering, censorship of images, is only enabled for accounts registered to mainland China phone numbers. Our findings serves as a reminder to China-focused NGOs and individuals of the potential hindrances they may face when communicating on Chinese social media platforms.

An indictment prepared by the Ankara Chief Public Prosecutor’s Office seeks a jail sentence of between seven-and-a-half and 15 years for former prosecutor Aziz Takçı, one of four prosecutors who stopped National Intelligence Organization (MİT) trucks that were suspected of illegally transporting weapons to Syria in 2014, reported by Turkish Minute.

The prosecutors were arrested in May 2015 on charges of attempting to topple the government.

The government harshly criticized the prosecutors and soldiers involved in the search of the MİT trucks, arguing that both the truck and its personnel were protected by MİT’s immunity, while the prosecutors said the trucks were making illegal arms shipments to rebel groups in Syria.

The indictment demands a merging of the trial of Takçı with an ongoing trial at the Supreme Court of Appeals’ 16th Criminal Chamber as a part of which he faces charges of illegally obtaining state secrets and political espionage.

In the indictment, it is also claimed that Takçı was using ByLock, a smart phone application which is the top communication tool among followers of the faith-based Gülen movement, according to the Turkish government.

In the currently ongoing post-coup purge, over 135,000 people have been purged due to their alleged links to the Gülen movement since July 15, 2016. Turkey’s Interior Minister Süleyman Soylu has announced on April 2 that 47,155 people have been jailed while 113,260 people have been detained with the same accusations. According to Soylu’s statement 2,575 judges and prosecutors have been imprisoned since failed coup attempt.