To celebrate the 60th anniversary of the European Union, EU Ambassador Roland Kobia organised a ceremony in Yangon to grant the first ever “Schuman Awards”for outstanding merits in promoting universal values which the EU actively supports across the globe such as human dignity, liberty, democracy, equality, the rule of law and respect for human rights.

The awards were granted to U Ko Ni (posthumous), Daw Ja Nan Lahtaw and U Aung Myo Min.

“The Schuman Award recognises the merits of those who stand out in promoting core values of the European Union – and indeed universal values of humanity. U Ko Ni, Daw Ja Nan Lahtaw and U Aung Myo Min have dedicated their lives to working towards a better future for their country and all the people who call Myanmar their home. They are ambassadors for peace, democracy, human rights and equality. With this award, the European Union would like to honour the important work of our first Schuman Laureates,” said EU Ambassador Roland Kobia.

The Schuman Awards – named after former French Foreign Minister and founding father of the European Union, Robert Schuman – were established in 2017 to recognise the merits of Myanmar personalities in defending core European values of peace, democracy and human rights.

China: Updates on the case of Lawyer Xie Yang

An Istanbul judge Wednesday ordered that 30 lawyers detained as part of a Fetullah Terrorist Organization (FETO)-linked probe be remanded in custody, according to judicial sources.

According to the sources, who asked not to be named due to restrictions on speaking to the media, the group includes Nuri Polat, the counsel for former opposition Nationalist Movement Party (MHP) deputy and chair candidate Meral Aksener; Erdogan Soruklu, the counsel for Erhan Tuncel, accused in the 2007 murder of Turkish-Armenian journalist Hrant Dink; as well as Nazif Aktas and Seyfettin Dayan, who have represented FETO-linked ex-police commissioners.

As part of an investigation into FETO-linked lawyers, 38 suspects initially gave testimony to the Istanbul Chief Public Prosecutor’s Office.

The Istanbul judge then ordered the 30 lawyers remanded in custody and the release of the other eight.

The investigation found that 25 of the suspects had used the ByLock mobile app, a suspected means of communication for FETO members. Five of the others had made calls to people who used the app.

According to the Turkish government, FETO and its U.S.-based leader Fetullah Gulen orchestrated the defeated coup of July 2016, which left 249 people martyred and nearly 2,200 injured.

Ankara has said FETO is behind a long-running campaign to overthrow the state through the infiltration of Turkish institutions, particularly the military, police and judiciary. 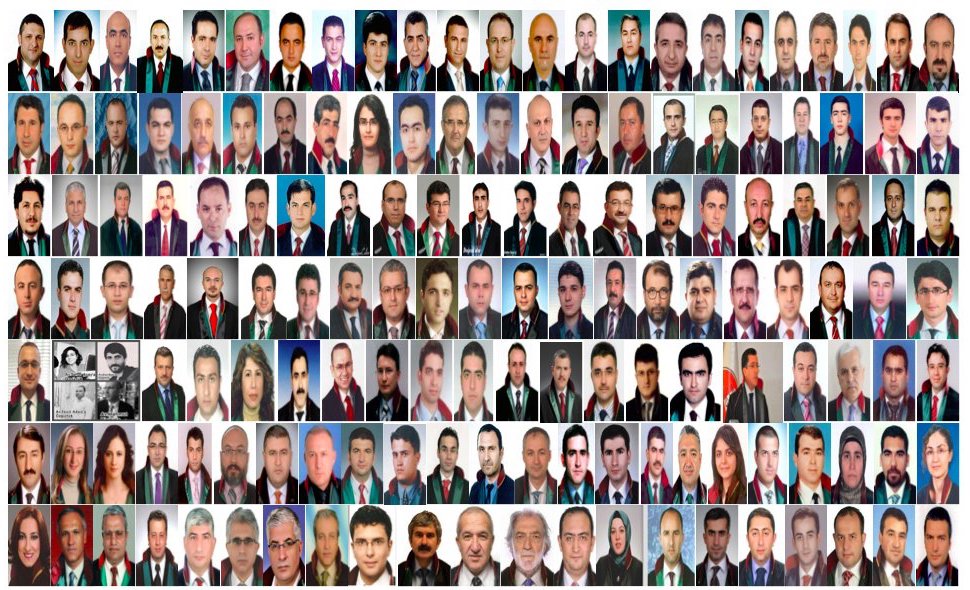 5th April and Lawyers Day in Turkey. But presently 38 lawyers under custody and more than 350 are arrestees. pic.twitter.com/WDKQvQp6jZ

Detained human rights attorney and activist Nguyen Van Dai will receive an award from the German Association of Judges on Wednesday, making him the first Vietnamese awarded the honor for his work in human rights, RFA’s Vietnamese Service has learned.

A representative of Nguyen Van Dai will accept the award from the group known in German as Deutscher Richterbund (DRB), which is the largest professional organization of judges and public prosecutors in Germany.

Every other year, the organization bestows a human rights award on a judge, public prosecutor, or other lawyer for outstanding merit in the defense of human rights.

Dai and other formerly jailed dissidents created the online group in 2013 to coordinate human rights activities across Vietnam and host forums in Hanoi and Saigon to mark International Human Rights Day.

“I think lawyer Nguyen Van Dai deserves this award,” Troi told RFA’s Vietnamese Service. “This is also a positive sign to promote democratization in Vietnam in the near future.”

The relatives of China’s detained human rights lawyers have written to U.S. President Donald Trump calling on him to raise Beijing’s human rights record during his forthcoming summit with President Xi Jinping in Florida on Thursday.

“We now know that they have been tortured, and we worry about whether they will live or die,” the relatives said of their loved ones. “We want to know how they are looking, and why they haven’t been allowed to meet with a lawyer for a year and eight months now.”

“We have never given up trying to find out the whereabouts of our loved ones, nor trying to help them,” the letter, addressed to President Trump at the White House, said.

“We have been detained several times … and beaten up by police because of our activities,” it said. “We have sent hundreds of letters and paid hundreds of visits, but it has all been to no avail.”

“We are writing to you, Mr. President, … because we know that under the present reality, there is no hope of a fair trial.”

Sixteen out of more than 300 human rights lawyers, activists, and law firm employees detained since July 2015 are still facing trial, while two have already been handed harsh sentences.

Jin Bianling, the U.S.-based wife of detained rights lawyer Jiang Tianyong, said she had penned the letter, dated March 31, on behalf of all of the relatives of lawyers detained across China in a nationwide police operation since July 2015.

“This week, Trump will meet with Xi Jinping, so we are hoping that Trump can make some demands on China, such as releasing all of the innocent rights lawyers and other citizens detained in the July 2015 crackdown,” she said.

Turkey: Joint statement by lawyers, judges and journalists on the ongoing crackdown on the rule of law in Turkey

The Council of Bars and Law Societies of Europe (CCBE), the European Federation of Journalists (EFJ), and the European Association of Judges (EAJ) firmly condemn the ongoing widespread persecution of lawyers, journalists, judges and prosecutors in Turkey.

After the failed coup of 15 July 2016, the Turkish government declared a state of emergency and adopted 21 decree-laws, which led to a serious undermining of human rights and the rule of law across the country. Thousands of judges and prosecutors, and hundreds of journalists and lawyers have been dismissed from jobs, detained, or arrested. A widespread censorship on media has been put in place and hundreds of civil society organisations have been shut down. Several lawyers’ associations and the independent judges’ Association YARSAV have been closed down and their assets have been seized or frozen without compensation.

Currently there are around 2000 (out of 4088 dismissed) judges and prosecutors, 350 lawyers and 150 journalists and media workers being detained, with a further 867 lawyers being prosecuted. Most of them are being targeted solely for carrying out their professional activities, on the basis of alleged accusations of supporting terrorist organisations. In many cases, they are detained without charges and without being brought before a judge. When Turkish courts issue detention warrants, they order the freezing of assets, leaving the detained unable to support their families.

The adopted decree-laws undermine the right of the defence. In anti-terror legislation related cases, the detained have no access to a lawyer for the first five days of police custody, and this right can be suspended for up to six months. When access to a lawyer is authorised, lawyer-client confidentiality is violated: clients’ interviews in prisons are recorded and often take place with the presence of a police officer in the room, and documents are confiscated and checked. Furthermore, several non-governmental organisations have expressed their concern about frequent episodes of mistreatment against detainees. 1

The undersigned organisations emphasise that an independent judiciary is an essential component in upholding the rule of law in a free society.

Thailand: These 6 Asian Power Women are Bold For Change

March is almost over but that doesn’t mean we should stop celebrating women. Here are a half dozen headliners from around Asia that are showing us how to run the world.

Sirikan Charoensiri will go down in Thailand’s history books as being the first lawyer charged with sedition by the Thai military junta. This happened in October last year, after she provided legal services through the firm she co-founded, Thai Lawyers for Human Rights, to 14 student activists from the New Democracy Movement, who were anti-junta. The practice was established after the coup in 2014 to help those arrested under martial law to have access to justice. If she is found guilty, she could be jailed for up to 15 years.

Earlier in the year, in May, Charoensiri was also charged with criminal offences. The police had wanted to search her car after her clients were detained but did not have a warrant. She therefore refused the request and was later charged with not complying with orders and for “concealing evidence”.

The silver lining in this cloud is that she has since been recognised by Amnesty International as one of six women who are leading human rights activism in Southeast Asia. “In [the region], there are few governments who can be proud of their human rights records, but there are countless women across the region who have braved great dangers to take a stand against injustice,” said its director for Southeast Asia and the Pacific, Champa Patel.

Edmund Yakani is the Executive Director of human rights organisation Community Empowerment for Progress Organisation (CEPO), based in South Sudan’s capital city Juba. He is among the most tenacious and vocal voices in the country when it comes to defending and promoting human rights, democratic transition and justice. He particularly stands out in his effort to ensure respect for rule of law and justice, and the inclusion of civil society in the ongoing peace talks.

South Sudan, the youngest country in the world, gained its independence as recent as in July 2011. By many social, economic and political standards, the country is among the poorest in the world. Respect for civil and political rights has never been established to the level its citizens wished for at independence.

The situation for human rights worsened following the outbreak of inter-ethnic and armed conflicts in 2013. Since then, human rights defenders and outspoken critics have been increasingly targeted by the government, security forces and other armed actors, and Edmund Yakani has himself been threatened on several occasions due to his work.

“State authorities see human rights work as part of a politically motivated agenda against them, and hence human rights defenders are seen as enemies of the state. In addition, the rule of law is compromised to the level that impunity has become a norm in the South Sudanese society”, said Edmund Yakani.

Despite facing enormous challenges and risk, Edmund Yakani stands his ground and continues to promote and ensure respect for human rights.