One of the co-chairs of the opposition Peoples’ Democratic Party (HDP), Selahattin Demirtaş, has said participating in trials through the voice and video informatics system (SEGBİS) is “torture,” adding that it is also “an unlawful practice.”

Demirtaş, who is currently being held in a jail in the northwestern province of Edirne, also said it had become impossible for him to attend court hearings physically due to the high number of complaints filed against him, adding that he was forced to defend himself through SEGBİS.

“I’m the co-chair of Turkey’s third biggest party,” Demirtaş told the court on March 16 during a hearing held in the southern province of Mersin regarding a case against him for “insulting” then-Prime Minister Ahmet Davutoğlu in a speech.

“Our other co-chair was discharged with a judicial operation. It’s a crime. The judiciary shouldn’t become a tool to this crime. Everyone should know that we will be respectful toward a fair judiciary. However, everyone should also know that because those who are holding power are spreading fear, we won’t be afraid,” he also said, referring to HDP co-chair Figen Yüksekdağ, who was stripped of her parliamentary post.

Noting that he hoped that the court only feared “justice and God,” Demirtaş demanded the end of the trial process.

Turkey: L4L and FTW observe hearing in KCK-trial in Istanbul

On March 9, 2017 there was another hearing in Istanbul  in the long-running case against 46 lawyers  accused of being involved in terrorism. The trial started in November 2011. All the lawyers on trial were at some point involved in the defence of the PKK leader, Abdullah Öcalan. Some of them were held in pre-trial detention for almost 2,5 years. Observers from L4L, Fair Trial Watch (FTW) and  the Dutch Bar Association, as well as observers from Britain, France, Germany and Italy attended the hearing.

During the previous hearing in November 2016, the defence argued that both the prosecutor and the president of the court who handled the case originally were Gülen supporters, who would have fabricated the allegations against the suspects. The prosecutor and the president of court are now also being prosecuted, as well as the police and the investigative judge who were involved in the preliminary investigation. The defence therefore asked for an immediate acquittal of the lawyers on trial. This request was however rejected. The defence then re-submitted requests to add information to the case file, as did the Public Prosecutor. The court  partially accepted these requests and partially denied them. The case was adjourned until July 6, 2017.

After the hearing, the observers spoke to lawyers working for TOHAV, the Foundation for Society and Legal Studies. They discussed the bad situation in Turkish prisons. The observers also spoke with the lawyer Önder Durdu, who is representing a judge suspected of terrorism because of his involvement in the Gülen movement. As a result he is under severe pressure. Furthermore, the observers spoke again to lawyers from the newspaper Cumhuriyet. The picture they paint of Turkey is still very worrying. They all confirmed that in fact the Rule of Law no longer exists in Turkey where five days after the coup on 5 July 2015, a state of emergency was declared.

Turkey: Joint letter of 8 UK and Irish Bars on arrested lawyers and judges 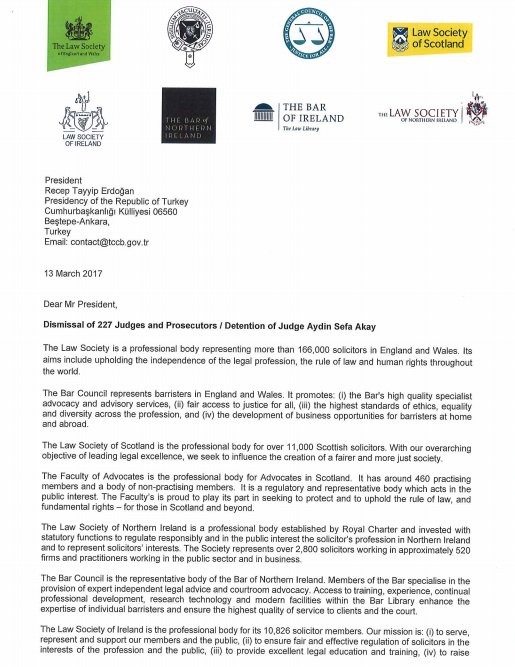 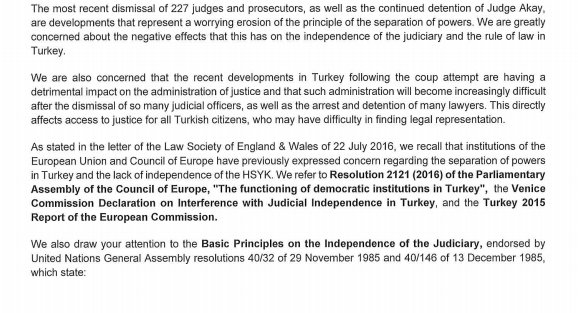 UN Side Event “The Independence of the Legal Profession”

After my presentation, with Diego Garcia-Sayan, Special Rapporteur on the independence of judges and lawyers!