Senator Leila de Lima has filed a resolution calling for an investigation into the murders of lawyers handling controversial cases, including the counsel of the late Albuera, Leyte mayor Rolando Espinosa Sr., who was himself killed inside his jail cell by police.

“This recent spate of killings victimizing members of the Bar makes it imperative for the government to enact measures for the personal and professional safety of Filipino lawyers and to effectively prevent attacks on their independence and safety,” De Lima’s Proposed Senate Resolution No. 300 said.

She cited the following murders:

De Lima said the 8th United Nations Congress on the Prevention of Crime and the Treatment of Offenders mandates that “governments shall ensure that lawyers are able to perform all their professional functions without intimidation, hindrance, harassment or improper interference.”

“[W]here the security of lawyers is threatened as a result of discharging their functions, they shall be adequately safeguarded by the authorities,” she said, quoting paragraph 17 of the Basic Principles on the Role of Lawyers of the UN instrument. 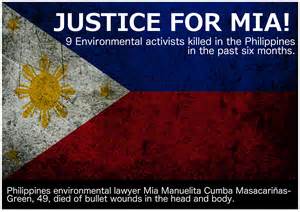