Greece: The Law Society of Upper Canada expresses grave concern about the harassment of lawyer Electra Koutra in Greece

The Law Society of Upper Canada* expresses grave concern about the harassment of lawyer Electra Koutra in Greece.

Electra Koutra is a human rights lawyer who has experienced harassment as a result of her advocacy on behalf of several Syrian refugees.

It has come to our attention that on September 27, 2016, several Syrian refugees between the ages of 13 and 16 were on their way to a cultural centre to take part in a theatrical performance about their lives in Syria when they were intercepted by Greek police and taken into custody on suspicion that they were members of an armed group.

Electra Koutra represented the children and their parents as they attempted to report the incident and file a complaint. When precluded from doing so, she posted a statement on her Facebook page, disclosing that the children had been ill-treated by the police and that their attempt to lodge a complaint had been blocked. The Facebook post went viral and culminated in an order for a criminal pre-investigation into the incident.

Shortly thereafter, Electra Koutra experienced several acts of harassment. She and a colleague were served a court summons in which they were listed as “suspects” in the said case. When they demanded access to the case file, a right granted under Greek law to “suspects”, the summons was re-issued with Electra Koutra and her colleague described as “witnesses”. One day later, two men in civilian clothes – later identified as police officers – broke into her apartment. Electra Koutra reported the incident and requested that the Head of Prosecutors remove her home address from the case file in order to protect her family. Her request was denied. Instead, her request for family protection was added to the case file, resulting in her address being even more publicly available. Additionally, an internal document leaked to the press indicated that the police were increasing security measures to avoid a strike against the police itself in response to Electra Koutra’s report concerning the break-in into her home.

Azerbaijan: The Law Society of Upper Canada expresses grave concern about the harassment of lawyer Elchin Sadigov in Azerbaijan

The Law Society of Upper Canada* expresses grave concern about the harassment of lawyer Elchin Sadigov in Azerbaijan.

Elchin Sadigov is a prominent criminal lawyer in Azerbaijan whose clients include several prisoners of conscience and other individuals who have faced politically motivated charges.

It has come to our attention that on November 2, 2016, Elchin Sadigov was threatened by an investigator from the Main Organized Crime Department (MOCD) of the Ministry of the Interior after he disclosed, in an interview, information about the alleged torture of his client, journalist Fikret Farmazoglu, by MOCD staff. Fikret Farmazoglu is currently detained at the MOCD. Reports indicate that the investigator told Elchin Sadigov that he would “pay a high price” for accusing the MOCD of torture.

Since the November 2, 2016 incident, Elchin Sadigov and his family have faced additional harassment and intimidation, including a media article accusing Elchin Sadigov of having an affair with Fikret Farmazoglu’s wife, the hacking of his Facebook page and the creation of fake accounts using his name. In addition, police interrogated Elchin Sadigov’s brother and asked for information about Elchin Sadigov’s wife and children. It is our understanding that police later told Elchin Sadigov that they had received a request to collect data about him and his family, but declined to disclose the reasons.

The Law Society is deeply concerned about Elchin Sadigov’s case. Reports indicate that there have been a growing number of cases of harassment, intimidation and persecution of human rights defenders and human rights lawyers by Azerbaijani authorities in recent years. We believe strongly that lawyers should be able to exercise their legitimate duties without fear for their lives, for their liberty and for their security.

Tajikistan: The Law Society of Upper Canada expresses grave concern about the convictions of lawyers Buzurgmehr Yorov and Nuriddin Makhkamov in Tajikistan

The Law Society of Upper Canada* expresses grave concern about the convictions of lawyers Buzurgmehr Yorov and Nuriddin Makhkamov in Tajikistan.

It has come to our attention that on October 6, 2016, prominent human rights lawyers Buzurgmehr Yorov and Nuriddin Makhkamov were convicted and sentenced to 21 and 23 years in prison, respectively, on charges of fraud, swindling, “arousing national, racial, local or religious hostility” and extremism. They have also been banned from practising law for five years following the completion of their prison sentences.

Human rights organizations believe that both lawyers’ arrests and subsequent convictions are tied to their representation of members of the Islamist Renaissance Party of Tajikistan (“IRPT”). The IRPT was banned by the government of Tajikistan in September 2015 and later declared a terrorist organization.

Reports have further indicated that authorities systematically interfered with Buzurgmehr Yorov and Nuriddin Makhkamov’s right to counsel and severely restricted public access to the trials. Moreover, it is alleged that the prosecution presented no credible evidence against either lawyer.

The Law Society of Upper Canada urges the government of Tajikistan to comply with Tajikistan’s obligations under international human rights laws, including the United Nations’ Basic Principles on the Role of Lawyers.

The International Bar Association’s Human Rights Institute is concerned by the recent arrest of human rights lawyer Oliver Holland in Zambia. Mr Holland, a lawyer with London-based law firm Leigh Day, was escorted to Chingola Central Police Station and detained without charge after conducting meetings with clients of a class action lawsuit in Zambia on Tuesday 10 January.

Mr Holland was meeting with clients from village communities regarding a lawsuit filed by 1,800 Zambian villagers against UK-based mining multinational Vedanta Resources and its Zambia-based subsidiary, Konkola Copper Mines (KCM). Both companies have been accused by villagers of being responsible for polluting their water sources and farm land, resulting in illness, death and low crop yields.

Mr Holland was initially detained under the Public Order Act which prohibits meetings of more than three people without a police permit. However, the very nature of Mr Holland’s work – representing 1,800 villagers with limited access to alternative means of communication – requires that he update his clients via group meetings involving around 100 to 150 people at a time.

After being detained for four hours, Mr Holland was informed that he was instead charged under the Penal Code Act for Unlawful Assembly. Upon being offered to have the charge reduced to a misdemeanour and a fine if he agreed to the offence, Mr Holland accepted and was released.

The Commanding Officer of the Police Station informed Mr Holland that he would have to seek a police permit before meeting with his clients in future. In order for Mr Holland to consult his clients the next day he was required to not only request a permit, but also consent to the presence of an undercover armed police officer at the meetings.

The Law Society of Upper Canada * expresses grave concern about the arrest of lawyer Levent Piskin in Turkey .

It has come to our attention that Levent Piskin , a human rights lawyer, was arrested by the Turkish police on November 14, 2016 . He is alleged to have conveyed messages from his client, Selahattin Demirtas , to the German publication Der Spiegel .

Although reports indicate that Levent Piskin was, on November 16, 2016 , provisionally released pending the end of the investigation, we are concerned that the basis for his arrest remains unclear as no formal charges have been brought against him.

The Law Society of Upper Canada urges the government of Turkey to comply with Turkey’s obligations under international human rights laws, including the United Nations’ Basic Principles on the Role of Lawyers.

Article 1 of the Basic Principles on the Role of Lawyers states:

All persons are entitled to call upon the assistance of a lawyer of their choice to protect and establish their rights and to defend them in all stages of criminal proceedings.

Developments in the crackdown on rights lawyers that began with the “Black Friday” or “709” sweep in July 2015 have continued into the New Year. Recent news on the topic has been dominated by reports that several of those detained have suffered physical and emotional torture. Xie Yang described his ordeal in a lengthy interview with his own legal representatives; Li Chunfu was released in a deeply traumatized state, unable to speak coherently; and his brother Li Heping and fellow rights lawyer Wang Quanzhang are said to have been subjected to abuses including intense electric shocks. A Washington Post editorial highlighted the first two cases on Friday, arguing that “in China, torture is real, and the rule of law is a sham”:

A nation under the rule of law must have a commitment that no one is exempt from justice. China has courts, judges and lawyers, but the Communist Party remains above the law. Two recent cases have dramatically illustrated how brutal and arbitrary punishment from the Chinese party-state can be, including its use of torture to silence dissent and break dissenters.

Imprisonment, forced confessions and deprivation are hardly new in China, but the fresh examples are raw and disturbing. The victims were lawyers committed to peaceful advocacy of human rights and dignity.

[…] The United States has regularly spoken out about the universal values of human rights and rule of law. President Trump has shown no interest in either and has endorsed the use of torture in interrogations. That can only embolden China’s leaders the next time they decide to apply thumbscrews to the champions of democracy and rule of law. [Source]

While some fear that Trump’s election “represents the biggest possible blow to everything that has been achieved in the realm of international human rights since the late 1940s,” others hope that his apparent willingness to confront China on an issue as sensitive as Taiwan’s status offers hope for a stronger line on rights issues. Prominent Chinese activists including Hu Jia, Chen Guangcheng, and Teng Biao established the China Human Rights Accountability Center earlier this month. The group aims to promote the use of recent U.S. legislation to sanction foreign officials involved in such abuses. 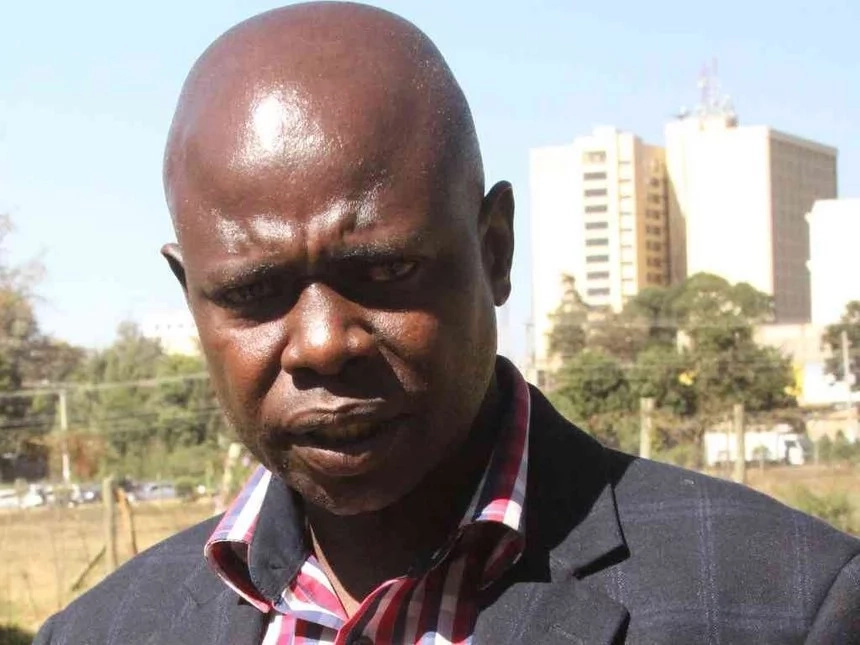 – Controversial lawyer Simon Lilan is nursing injuries after he was attacked on Saturday, January 28

Simon Lilan, lawyer of the late former MP Mark Too is nursing injuries after he was attacked on Saturday, January 28 in Eldoret.

The lawyer who went into hiding weeks ago after Mark Too’s burial said he was beaten up by six guards at the KVDA plaza in Eldoret.

“I argued with then on why they were blocking me from entering my office but they refused to listen,” he said.

He said he was injured on the head and the chest after the guards descended on him as an armed police office at the building watched.

The guards claimed Lilan refused to sign the visitors book, a requirement for all people entering the building.