A leading lawyer and adviser to Aung San Suu Kyi’s National League for Democracy (NLD) party has been shot dead at Yangon airport in Myanmar.

Ko Ni was shot in the head on Sunday after arriving from an international trip. A taxi driver was also shot.

A suspect has been detained but there are no details on the motive.

Ko Ni was one of few prominent Muslims in a country dominated by Buddhists. It is not clear if that was a factor in his death, says the BBC’s Jonah Fisher.

Assassinations are extremely rare in Myanmar.

A student activist dating back to the uprising of 1988, Ko Ni was a political prisoner and then, once released, a senior lawyer and adviser to the NLD.

Day of the Endangered Lawyer/China: Deutschland/Germany

A group of lawyers, non-lawyers and Amnesty International supporters performed a play by the State Theatre Nuremburg ensemble:”Trial against Hans Litten – Taken at midnight“. Hans Litten was a German criminal lawyer who fought against the German faschists, was arrested 1933 and committed suicide 1938 in KZ Dachau, the Dachau concentration camp.

Amnesty International / German section organized two Urgent Actions for these Chinese colleagues:
Xie Yang
http://www.amnesty.de/2017/1/23/china-freiheit-fuer-verfolgte-menschenrechtsanwaelte?destination=startseite
At the end of this call is a link “Tag der verfolgten Anwälte und Anwältinnen” to the site of foundation “Day of the Endangered lawyer”: http://dayoftheendangeredlawyer.eu/

India: Shalini Gera on Attack on Bela Bhatia & Plight of Lawyers in Chhattisgarh

Shalini Gera is a lawyer working in Bastar, Chhattisgarh under the collective JagLAG – Jagdalpur Legal Aid Group and has faced unprecedented level of persecution from the state and her legal colleagues in the state.

On December 25, 2016, a fact-finding team of seven lawyers and activists set out from Telangana to Chhattisgarh’s Bijapur district to investigate the alleged encounter of a hearing-impaired teenager and other human rights abuses in the region. The entire team was arrested

Unidentified men on Saturday shot dead a lawyer in Samastipur, police said. The assailants accosted Vijay Kumar Poddar near a Kali temple under town police station this evening and fired at him, Superintendent of Police Nawal Kumar Singh said. The injured lawyer was taken to Sadar Hospital where doctors declared him brought dead.

The SP said Poddar was returning home after attending a fast track court in the evening when the gang of 3-4, fired at him. He added the murderers were yet to be identified. Meanwhile, lawyers of the district said they would decide on protest programme on the murder when the court reopens on Monday.

Protesting against the assault on one of their colleagues, lawyers of Orissa High Court Bar Association stayed away from work calling for a cease work stir.

A meeting under the chairmanship of Bar Association Vice President Kali Prasanna Mishra was held on Friday to protest on the issue and also discuss proceedings on the backdrop of attack on lawyer Chinmaya Mohanty.

Notably, Chinmaya a member of State Bar Council was attacked by some unidentified miscreants in Lingaraj police station area in Bhubaneswar on Wednesday evening.

A case was registered at Lingaraj PS but so far police has not taken any foreseeable actions in this regard which has led to protests and disruption in court’s proceedings.

Orissa High Court Bar Association secretary Umesh Chandra Behura said, they would meet on Monday to take stock of the situation on their demands for immediate arrests of the culprits and decide on future course of actions. 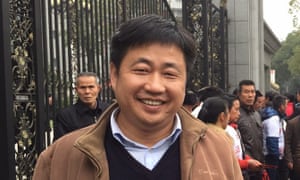 China must investigate a harrowing account of torture by a detained lawyer and release several political prisoners, the European Union has demanded in a rare statement amid a deteriorating human rights situation under president Xi Jinping.

Separate reports have said two other civil rights attorneys, Li Heping and Wang Quanzhang, have also been tortured while in custody.

“If verified, this mistreatment would amount to torture,” the European Union’s foreign affairs spokesperson said in a statement. “All necessary measures to ensure the safety and wellbeing of these individuals need to be taken.”

“If the accounts of mistreatment or torture are confirmed, this should result in the punishment of the responsible persons,” the statement added, citing China’s own laws that prohibit torture.