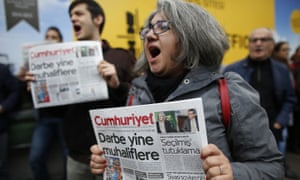 Turkish police have detained the editor and at least 12 senior staff of Turkey’s opposition Cumhuriyet newspaper in a widening crackdown on dissenting voices.

The editor-in-chief, Murat Sabuncu, the cartoonist, Musa Kart, the paper’s lawyer and several columnists were detained, some following raids at their homes, Cumhuriyet reported on its website. Police had warrants for the detentions of 16 staff members, the paper said.

The detentions at the left-leaning and pro-secular Cumhuriyet, one of Turkey’s oldest newspapers, come amid accusations by opposition parties and human rights groups that Turkey’s government is using the state of emergency imposed following a failed military coup in July to clamp down not only on the alleged coup plotters but on all government critics.

A statement from the Istanbul chief prosecutor’s office said those detained were suspected of “committing crimes” on behalf of the movement led by US-based Muslim cleric Fethullah Gülen, accused by the government of masterminding the coup attempt as well as the outlawed Kurdistan Workers’ party, or PKK.

The Supreme Court has said that lawyers should be put to mental and physical fitness test to be prove their eligibility to conduct trials in criminal cases and to ensure that litigants don’t suffer on account of their incompetence.

A bench of Justices J S Khehar and Adarsh K Goel said the Advocates Act and the relevant rules needed to be reviewed to incorporate a provision for giving fitness certificate to an advocate to appear in court. The court’s observation came while rejecting the plea of the Uber rape case accused who sought recall of witnesses on the ground that his lawyer was incompetent.
“Perhaps time has come to review the Advocates Act and the relevant rules to examine the continued fitness of an advocate to conduct a criminal trial on account of advanced age or other mental or physical infirmity, to avoid grievance that an advocate who conducted trial was unfit or incompetent. This is an aspect which needs to be looked into by the concerned authorities including the Law Commission and the Bar Council of India,” the court said.

The bench said the interest of justice would suffer if the counsel conducting the trial was physically or mentally unfit on account of any disability and this should not be allowed.

Thailand: The lawyer preparing to defend herself

Sirikan Charoensiri has made a career standing up for human rights, but she now faces charges herself after being accused of sedition in a case that has provoked widespread condemnation from international groups.

The black Honda CR-V parked in front of Bangkok’s military court was sealed off by eight yellow barriers. Police officers taped A4 papers to each of the four door handles and trunk, and put a lock to the front wheel.

The car belonged to human rights lawyer Sirikan Charoensiri, who represented 14 activists arrested for violating a junta ban on political gatherings last June. After accompanying her clients to the court, police had attempted to search her car without a court warrant. Ms Sirikan resisted, later saying that she acted to protect her clients’ confidentiality.

That night, in the presence of at least two uniformed officers, she slept on the pavement in front of the military court.

“The only thought I had in my mind was that if I had to meet my clients tomorrow, could I say that I had fully done my duty in protecting their rights?” the 30-year-old told the Bangkok Post Sunday at her office in Saphan Khwai.

It would be her first time representing a client in court, and the incident provided a test of what Ms Sirikan had been preparing herself for almost 10 years.

“It made me ask myself, ‘Am I ready to be a human rights lawyer?'”

Thailand: Charges of sedition and violating the ban on political gatherings against Sirikan “June” Charoensiri, a human rights lawyer with TLHR

New information THA 002 / 0715 / OBS 055.7 Ongoing Judicial Harassment Thailand October 28, 2016 The Observatory for the Protection of Human Rights Defenders, a partnership of the World Organisation Against Torture (OMCT) and FIDH, has received new information and requests your urgent intervention in the following situation in Thailand. New information: The Observatory has been informed by reliable sources about charges of sedition and violating the ban on political gatherings against (…)

Mahienour el-Massry is an Egyptian political activist and lawyer who is well-known for employee rights advocacy and for taking part in the January 25 Revolution and June 30, 2013, demonstrations. She is one of the first activists who helped uncover the facts surrounding the killing of Khaled Saeed — the young Egyptian whose death in police custody is widely cited as helping spark the 2011 revolution.

On May 20, 2014, the court upheld a decision tosentence Massry to prison under the protest law for “demonstrating without permit and assaulting security forces,” for protesting during the trial of those accused of killing Saeed on Dec. 2, 2013.

On June 26, 2014, while Massry was in prison, the committee of the Ludovic-Trarieux International Human Rights Prize announced its decision that Massry be awarded the 2014 prize. Massry was released from prison in August of this year. In an interview with Al-Monitor, Massry spoke about her experience in prison.

The text of the interview follows:

Al-Monitor:  How much time did you spend in prison?

Massry:  I was arrested for the first time during a demonstration related to Khaled Saeed on Dec. 2, 2013. A six-month jail sentence was confirmed on May 20, 2014, for protesting, assaulting security forces and causing damages. I was arrested for the second time in 2015, during a protest in front of the Ittihadiya Palace, and I was sentenced to 15 months in prison, which I spent in Damanhour prison and Qanater prison, under the law on public assembly.

Open Letter to Mr. Xi Jinping from Families of the 709 Crackdown

Dear General Secretary of the Communist Party of China and Chairman of the National Security Council Xi Jinping,

As the Sixth Plenary Session of the 18th Central Committee of the Communist Party of China is being convened, we are writing this letter in full respect, in hopes of explaining our circumstances to you.

We are the families of the victims of the 709 crackdown, well-known to the police and watched from around the world. From July 10 of last year (2015) on, we have searched for our loved ones: truly a difficult path to tread. Our loved ones were taken by the police with no further news of their whereabouts. It was not until January 8 of this year that we finally received their “Notices of Arrest,” informing us that they had been accused of either “subversion of state power” or “inciting subversion of state power.” For this past year and four months, the rights guaranteed by the Chinese Constitution andCriminal Procedure Law have been trampled into oblivion by the police authorities. As time moves on, what we know from various departments of the public security, procuratorate, and judiciary indicates that this has been a major case directed by the National Security Council and carried out by a vast task force. What’s more, the leader of the National Security Council is none other than you, Chairman Xi.

If you’d said around July and August of last year that you were unaware of the details of the 709 crackdown, which rides roughshod on your plan to “rule the nation according to the law” that you advocated, we would have believed you. But after the public smearing in reports on CCTV and in theGlobal Times, and the international media’s truthful coverage, you must already know about a case of such significance! If you still don’t know about it, then the people working for you need to take stock of their jobs and think about what they are doing. However, this is no matter: we are writing this letter to you now, so you will be sure to know all about it!

Her legal woes are far from over.
An anti-crime group along with former National Bureau of Investigation (NBI) officials has initiated a disbarment complaint against embattled Sen. Leila de Lima.
In a 43-page complaint before the High Court’s Office of the Bar Confidant, the Volunteers Against Crime and Corruption (VACC), together with former NBI officials Reynaldo Esmeralda,Ruel Lasala and whistle-blower Sandra Cam, said de Lima should be disbarred for gross immorality, violation of the Lawyers Oath and the Code of Professional Responsibility.
“The practice of law is a privilege…It is a privilege that can be revoked, subject to the mandate of due process once a lawyer violates his oath and the dictates of legal ethics,” the complaint stated and was premised  on the testimonies of witnesses before the House committee on justice’s probe on the proliferation of illegal drugs inside the New Bilibid Prison (NBP).
Witnesses including NBI officials, high profile inmates, complainants said “respondent in this case knew that what were sold and traded were all prohibited drugs. Sen. de Lima did not only provide protection for the incarcerated drug lords to ensure the proliferation of illegal drug trade, not only inside Bilibid but also from the outside.”

France: The crusade against a French people’s lawyer

A 65-year-old lawyer is arrested at home at dawn, his home is searched by the police, he is involuntarily admitted to a psychiatric hospital and then suspended from practice for three years. In China? No, in France. In one of the most spectacular and outrageous attacks against lawyers in French history, people’s lawyer Bernard Ripert of Grenoble suffered this massive indignity in May 2016.

Ripert was arrested, allegedly for ’intimidating a judge’, and then immediately placed in a psychiatric hospital against his will. An outspoken and courageous member of the Bar for more than 40 years, he was the quintessential people’s lawyer. Since 1976 he has acted pro bono for demonstrators, as well as conscientious objectors, the poor and the downtrodden. In previous years he represented the terrorist group Action Directe. He was well-known across the country for his unbridled attacks against injustice and arbitrariness, inside and outside the courtroom, and because of this many judges detested him, particularly in Grenoble.

Over the years Ripert was subjected to professional disciplinary proceedings, and sanctioned on three occasions, including a one year suspension. Although an 11-member panel acquitted him of disciplinary charges brought in early May this year, the prosecutor lodged an appeal before the Grenoble Court of Appeal. His subsequent arrest unleashed a wave of indignation, solidarity and protest on the part of the Bar, in France and across Europe. The day after his arrest about a fifth of lawyers in Grenoble demonstrated in robes against his arrest, while he undertook a hunger strike.