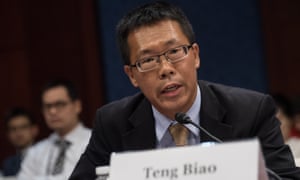 Chinese dissidents have urged Barack Obama to confront Xi Jinping over what they called China’s worst human rights crisis since the 1989 Tiananmen crackdown when he travels to the G20 economic summit in Hangzhou this week.

During a meeting at the White House on Tuesday afternoon, prominent Chinese activists told Susan Rice, Obama’s national security adviser, that China’s president had presided over a dramatic offensive against opponents of the Communist partysince taking power in late 2012.

Teng Biao, an exiled human rights lawyer who was among those invited to address Rice, told the Guardian he had called on the US president to publicly speak out on what is likely to be his final presidential visit to Asia.

“China is experiencing its worst human rights crackdown since the Tiananmen massacre in 1989,” Teng said.

“Especially since Xi Jinping came to power, many human rights lawyers and activists were detained and disappeared; many, many NGOs were shut down; and other civil society organisations, universities, media, internet, Christian churches and other religious groups were also targeted. It is obvious that the Chinese government has violated human rights and the current situation is very, very worrying,” he added.

A popular Port Harcourt-based lawyer, Mr. Ken Atsuete, was, last night at 8pm, assassinated by unknown gunmen at his residence.

It was gathered that the gunmen stormed Atsuete’s residence, cornered him and shot him several times.

Atsuete was one of the counsels for the former chairman of the Asari-Toru Local Government Area, Ojukaye Flag Amachree, before he was assassinated.

He was one of the speakers at the just concluded conference of the Nigerian Bar Association, held in Port Harcourt.

A close confidant of the deceased and human rights activist, Mr. Anyakwe Nsirimovu, expressed shock over the incident, adding that “Ken Atsuete’s lifeless body is currently lying at the University of Port Harcourt Teaching Hospital mortuary.

On June 30, 2016, human rights lawyer Willie Kimani was found dead, along with his clientJosephat Mwenda and their taxi driver, Joseph Muiruri. Willie Kimani, a lawyer working with the International Justice Mission (IJM) and the Rights Promotion and Protection Centre, had been representing his client in a case against a police officer who allegedly shot him during a traffic stop in 2015. On June 23, 2016, Willie Kimani, his client and taxi driver were abducted after departing from a court hearing at the Movako Law Courts. Seven days later, their bodies were recovered on the bank of a river north-east of Nairobi. Moreover, post-mortem reports reveal that the trio had signs of torture including severe bleeding and fractures to the skull.

The Law Society is deeply saddened by the murders of Willie Kimani, Josephat Mwenda and Joseph Muiruri and strongly condemns these extrajudicial killings.  Reports from Kenyan human rights and non-governmental organizations indicate that in recent years, there have been several hundred cases involving abuses carried out by Kenyan officials including corruption, harassment, abduction, torture and judicial killings.

On August 11, 2016, the High Court ruled that Willie Kimani, Josephat Mwenda and Joseph Muiruri were abducted and murdered by police officers. The Law Society is pleased to hear of this ruling but remains concerned about the ability of lawyers and members of the judiciary to carry out their legitimate duties.

The Law Society of Upper Canada urges the government of Kenya to comply with Kenya’s obligations under international human rights laws, including the African Charter on Human and Peoples’ Rights, the Universal Declaration of Human Rights, the International Covenant of Civil and Political Rights and the United Nations’ Basic Principles on the Role of Lawyers.

Article 16 of the Basic Principles on Role of Lawyers states:

Governments shall ensure that lawyers (a) are able to perform all of their professional functions without intimidation, hindrance, harassment or improper interference; (b) are able to travel and to consult with their clients freely both within their own country and abroad; and (c) shall not suffer, or be threatened with, prosecution or administrative, economics or other sanctions for any action taken in accordance with recognized professional duties, standards and ethics.

Pakistan: Public Statement – The Law Society of Upper Canada expresses grave concerns over the murder of lawyer Bilal Anwar Kasi and the deadly attack on lawyers in Pakistan

On August, 8, 2016, Bilal Anwar Kasi was on his way to work when he was shot and killed by unknown gunmen. Following his death, on the same day, approximately 200 lawyers gathered at the local hospital to protest and mourn the loss of their colleague. The lawyers were in the emergency department when a bomb exploded, killing over 70 people — the majority of them lawyers — and injuring many others. It is our understanding that Taliban faction Jamaat-ur-Ahrar and the Islamic State of Iraq and the Levant (ISIL, also known as ISIS) have taken responsibility for the murder of Bilal Anwar Kasi and for the bombing.

The Law Society is deeply saddened by the murder of Bilal Anwar Kasi and the deadly attack on lawyers in Pakistan. The Law Society believes strongly that lawyers should be able to exercise their legitimate duties without fear for their lives, for their liberty and for their security.

The Law Society of Upper Canada urges the government of Pakistan to comply with Pakistan’s obligations under international human rights laws, including the Universal Declaration of Human Rights, the International Covenant of Civil and Political Rights and the United Nations’ Basic Principles on the Role of Lawyers.

Article 16 of the Basic Principles on Role of Lawyers states:

Malaysia: Public Statement – The Law Society of Upper Canada expresses its continued concern about the charges against lawyer N. Surendran in Malaysia

n 2014, two sedition charges were brought against N. Surendran for critical comments he made about a court verdict involving his client, Anwar Ibrahim – leader of the opposition and prisoner of conscience.

On June 24, 2016, the High Court of Kuala Lumpur found the Sedition Act  to be constitutional and that the sedition charges brought against N. Surendran still stand. It is our understanding that N. Surendran’s lawyers have filed an appeal of this decision.

The Law Society of Upper Canada urges the government of Malaysia to comply with Articles 16 and 23 of the United Nations’ Basic Principles on the Role of Lawyers.

Human rights lawyer Zhang Kai was detained by authorities after he retracted the statements he was forced to make during his previous incarceration.

Zhang was initially arrested in August 2015 for giving advice to Christians who protested the removal of crosses on their churches. He was held for six months in an unknown location for “endangering state secrets” and “gathering a crowd to disrupt public order.” On Feb. 25, Chinese media showed footage of him admitting to charges.

Zhang received a criminal detention sentence but it was cut short. He was released on bail last March on the condition that he would not speak to the media.

According to Zhang’s lawyer, Tan Chenshou, police from Wenzhou City went to Zhang’s home in Inner Mongolia to arrest him. Earlier that day, Zhang reportedly retracted the scripted criticisms of human rights lawyers that he was coerced to say while he was in prison.

“I think it’s very likely [that he will be prosecuted]. We can’t rule it out,” Tan toldRadio Free Asia (RFA). “He was forbidden to talk to the press; Zhang Kai has been targeted for a lot of persecution,” Tan added.