Egyptian authorities released several political prisoners on Saturday after more than a year of imprisonment.

Among those freed were human rights lawyer, Mahinour al-Masry and journalist Yousif Shaaban who were jailed for “storming” an Alexandria police station in 2013.

The two were sentenced with a 20 year sentence along with eight others on charges of “protesting without authorisation, damaging property” and “injuring policemen” however a retrial in May 2015 saw the defendants sentenced to a decreased 15 months.

While imprisoned, El-Masry was awarded the 2014 Ludovic Trarieux Award for her contributions to the defence of human rights.

In January, a source told The New Arab that Egypt’s President Abd al-Fattah al-Sisi was expected to issue pardons for 100 convicts on the anniversary of the January 25 revolution, in an attempt to ward of mass anti-government protests.

The 2015 pardons that included some imprisoned revolutionaries and left-wing activists did not boost Sisi’s popularity among these groups. 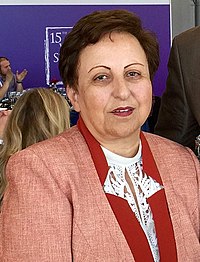 “THE TRUTH IS, anyone can be turned,” I recently explained to family members as we sat around my parents’ living room, discussing whether a new acquaintance was a government informant — a person invading our personal and religious spaces to pass on information to the US government. “Everyone has something to lose, or to gain, and if the right pressure points are pressed, they will turn. It takes an extraordinary person to withstand that kind of pressure.”

An extraordinary person. And this is in the American context, where we can debate such issues to the drone of Fourth of July fireworks and not precision drone strikes; where disappearances and arbitrary detentions are so 2002. What does resistance now look like under an extremely suppressive and violent regime? How much easier would it be to pressure activists to abdicate their struggles? Looking at the life of Shirin Ebadi, the answer is: Not easy at all. Ebadi is a lawyer, human rights activist, and former Irani judge, who won the Nobel Peace Prize in 2003 for her human rights work in Iran. Her latest autobiographical work,Until We Are Free, describes her struggle to erect the rule of human rights law in Iran after winning the Nobel Peace Prize.

Ebadi quickly debunks the notion that the life of a Nobel laureate is one in which the doors of progress open widely and tyranny abates under the world’s watchful eye with the prestige of the Nobel Prize serving as unassailable armor. Instead, as the Ahmadinejad reign devolves into further paranoiac policies and human rights violations abound — arbitrary detentions, the brutal suppression of political protests, the denial of access to attorneys, sham criminal charges like “conspiracy against national security” and the “dissemination of lies” — Ebadi and her colleagues are only further persecuted, putting their life and liberty on the line to salvage the remnants of Irani freedom.

Iran: Arbitrary Sentencing and Detention of and Lack of Medical Treatment for Ms. Bahareh Hedayat and Mr. Abdolfattah Soltani | Letter

Lawyers’ Rights Watch Canada (LRWC) is a committee of lawyers and others who promote human rights and the rule of law through advocacy, education and research. LRWC is an NGO in Special Consultative Status with the UN Economic and Social Council (ECOSOC).

LRWC objects to the wrongful prosecution, sentencing and imprisonment of Ms. Bahareh Hedayat, a human rights defender who is a member ofDaftar-e Tahkim Vahdat (the largest students’ union in Iran), one of the founders of the “One Million Signatures Campaign”, and a citizen of the Islamic Republic of Iran. We note that on 26 May 2016, the UN Working Group on Arbitrary Detention (WGAD) released an opinion, adopted on 19 April 2016, that actions of the Government of Iran depriving Ms. Hedayat of her liberty for periods from June 2006 to and following May 2015 have no legal justification, are arbitrary and are in contravention of the Universal Declaration of Human Rights (UDHR) and the International Covenant on Civil and Political Rights. (ICCPR). Further, Ms. Hedayat is denied health care and, in particular, was denied the timely treatment of kidney issues that required surgery in 2010 and completely denied post-operative care.[1]

LRWC also objects, as it has for years, to the wrongful prosecution, sentencing and imprisonment of Mr. Abdolfattah Soltani, a human rights lawyer and co-founder of the Defenders of Human Rights Center (DHRC). Mr. Soltani, a citizen of the Islamic Republic of Iran, has been imprisoned in Tehran’s Evin prison since 2011. We note that on 6 February 2013, WGAD concluded that the deprivation of liberty of Mr. Soltani was arbitrary and in violation of several articles of the International Covenant on Civil and Political Rights (ICCPR).[2] Further, Mr. Soltani suffers from medical ailments and there are serious concerns regarding the effect of his current imprisonment on his long-term health.[3]