China: A Joint Statement by NGOs in Hong Kong and Taiwan

Call on the Chinese Government to repeal the Convictions
Against Hu Shigen, Zhou Shifeng, Zhai Yuanmin and Gou Hongguo
A Statement by the Hong Kong and Taiwan NGOs
(5 August, 2016) The Chinese authorities have trialed 4 of the 709 cases from 2 August to 5 August. Zhai Yanmin (human rights defender), Hu Shigen (human rights defender), Zhou Shifeng (human rights lawyers) and Gou Hongguo (human rights defender) were all found guilty of “subverting state power”. They have been sentenced to 3 to 7.5 years of imprisonment or suspension and with 3 to 5 years deprivation of political rights. (Attachment 1, Chinese only)
The Chinese authorities have claimed extensively that the trials are open, transparent and just. However, as the public see them, they are “show trials” seriously violating the law and the human nature. They have infringed human rights and are full of lies. (Attachment 2)
“Subverting state power” is a grave and complex accusation, and the Chinese courts can have each one of the case completed, with trial, verdict and sentencing, all done within a matter of a few hours. It is also worth noting that the trials have been conducted basing largely on the confessions of the defendants who had been held incommunicado for over a year without a single chance to meet the lawyers of their own choosing.
Throughout the trials, none of the defendants had made any statement of defence. They all succumbed to the accusations of the prosecutors, and were ready to disclose the others. Without any exception, the defendants all praised and thanks the prosecutors, the collegial panels and the Party with rhetoric. They all promised not to appeal. Among the 48 attendants to the trials are members of the National People’s Congress, the Political Consultative Conferences, legal practitioners, academics and journalists. What is ironic however was that while the courtrooms were fully packed, there was no trace of the family members or the self-appointment lawyers of the defendants. Any other members of the public intending to sit in the hearing as the law allows them was dispelled by officials.
Outside the courtrooms, the Chinese authorities have concocted an unprecedented round of propaganda by manipulating the media both in and out of the country, including but not limited to slandering diplomats in China, family members of the defendants and the rights lawyers’ community. There were also attacks on INGOs.
The so-called “criminal facts” used to accuse the defendants of “subverting state power” and “initiating color revolution” were feeble. “Evidence” listed included discussion in private meal gathering, partaking in workshops outside the country, enunciations and aspirations in pursuit of freedoms and democracy as well as the various calls for the Chinese courts to review cases of miscarriage of justice, to protect lawyers’ right to access files.
Upon these observations, we
1. Strongly condemn the Chinese authorities in depriving the four individuals at stake their right to litigation. The ways their cases are handled have violated the Chinese Constitution, the PRC Criminal Procedure Law. These violations include but not limited to the following: right to meet with self-appointed lawyers, right to correspond in writing with family members and lawyers, right to legal consultation, right to be free from torture and inhuman treatments, right to be free from “self-incrimination” and media trials.
2. Strongly demand the Chinese authorities to immediately repeal all the verdicts and sentencing against the 4 individuals at stake. Inquiry should be made to hold the Public Security, Procuratorate and the Court at both central and local levels legally accountable for the malfeasances and power abuses incurred in the handling of the cases.
3. Strongly demand the Chinese authorities to stop its systematic suppression on the civil society in the country, endorse and protect the rights lawyers, rights defenders, religious practitioners for all their efforts in monitoring the Chinese government’s “rule according to law”, and in promoting rights and rule of law.
4. Strongly demand the Chinese authorities to ensure that all lawyers can perform their professional duties, and be free from any intimidation, blockage and or unwarranted interventions in their work. Lawyers should be ensured that any action they take basing on their professional code, principles and ethics should be free from any legal, administrative, economic and or any other sanctions; or any threats and intimidations to these sanctions.
5. Strongly demand the Chinese authorities to respect role and identity as a member of the United Nations and a State Party to the many international human rights conventions; and be abide by the international legal obligations thereby incurred.
6. Strongly urge the international communities, including the governments, to call upon China to repeal all charges and sentencing against the rights lawyers and defenders, stop violating human rights and stop its suppression of the civil society before the G20 Summit.
Initiating groups
1.China Human Rights Lawyers Concern Group (Hong Kong)
2.Taiwan Support China Human Rights Lawyers Network
Co-signatories (ongoing)
Hong Kong
1.Progressive Lawyers Group (Hong Kong)
2.Hong Kong Alliance in Support of Patriotic Democratic Movements of China
3.Justice and Peace Commission of the Hong Kong Catholic Diocese
4.New School for Democracy
Taiwan
1.Taiwan Association for Human Rights
2.Taiwan Association for China Human Rights
3.Taiwan Students for a Democratic China
4.Taiwan Society for Democracy
5.Taiwan Alliance to End the Death Penalty
6. Friends of Liu Xiao-Po
Attachments
1.Verdicts and sentencing of Zhai Yanmin, Hu Shigen, Zhou Shifeng and Gou Hongguo (Chinese version only) (點擊下載PDF版本)
2.Legal irregularities and violations of the 709 Trials (3-5 August 2016)

Zhengzhou Police posted a status of Lawyer Ren Quaniu’s “Confession Statement” on its official Weibo yesterday around noon, saying Lawyer Ren’s attitude towards his own “crime” is “positive and direct”, so changing his “criminal compulsory measures” into “released on bail”. It is said that Lawyer Ren has arrived home safely.

Lawyers in China addressed that Zhengzhou Police’s behaviour violate the law which without any legal bases: the current status of Lawyer Ren is only a “criminal suspect”, the police must guarantee all evidences are confidential; bdesides, the case is under interrogation, the “confession statement” is only a deposition， even defense lawyer cannot access it. 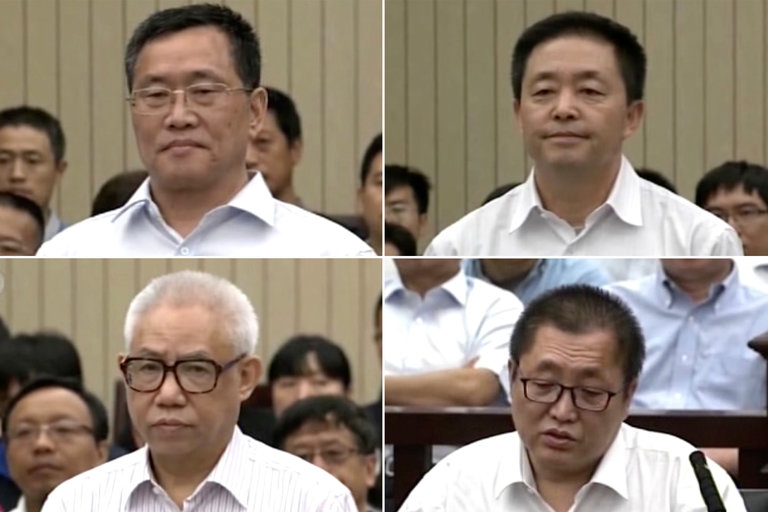 Chinese lawyers and rights activists appeared in televised trials throughout this week in what seemed to be a new, more public phase of President Xi Jinping’s campaign to cleanse the country of liberal ideas and activism.

Legal experts and supporters of four defendants denounced the hearings, held on consecutive days in Tianjin, a port city near Beijing, as grotesque show trials. All four men were shown meekly renouncing their activist pasts and urging people to guard against sinister forces threatening the Communist Party, before they were convicted and sentenced.

But for the government, the trials served a broader political purpose.

By airing the abject confessions and accusations of a sweeping, conspiratorial antiparty coalition, Mr. Xi’s administration was “putting civil society in all its forms on trial, and vilifying them as an anti-China plot,”Maya Wang, a researcher on China for Human Rights Watch, said in emailed comments.

“The trials thus serve two purposes: to punish the activists, but also to use them to bolster President Xi’s claims,” she said.