Immediately withdraw all FIRs against the protesting lawyers!!

Stop intimidation and harassment of lawyers!!

On July 24, 2016 the Bar Council of India (BCI) suspended 126 lawyers of Tamil Nadu, including 21 Bar Association leaders, most of whom were members of the Joint Action Committee (JAC), who had given the call for the protest. The protest was called at the Madras High Court, High Court bench in Madurai and subordinate courts, to exercise their democratic rights and stand against the recently amended draconian disciplinary rules of the Madras High Court, originally framed in 1970 under the Advocates Act, 1961.

The controversy stems from the Madras High Court’s amendment inserting as many as four new provisions to Rule 14 (Rule 14A to Rule 14D) of Madras High Court Disciplinary Rules, vide notification dated May 25, 2016. These are meant to be disciplinary rules for advocates appearing before courts in the state of Tamil Nadu, and have been framed under Section 34 (1) of the Advocates Act, 1961. The latest amended provisions confer irrepressible power to the High Court as well as the court of Principal District Judge in every district, to debar advocates. The amended Rule 14-A inserted 6 additional grounds on which an advocate can be disbarred, including, ‘abusing’ or ‘browbeating’ a judge, spreading unfounded allegations/petition against a judge, participation in a procession inside the Court campus.

The amendments to the Madras High Court Rules are an overreach and arbitrary use of powers under Section 34 (1) of the Advocates Act, 1961. The terms ‘abuse’ or ‘browbeating’ are not defined under the Madras High Court Rules. This opens the provisions to wide interpretation in the hands of judges and judicial officers and misuse of the provisions for the harassment and intimidation of lawyers. Any genuine complaint/petition against judicial officers involved in corrupt practices can easily be managed by classifying it as ‘misconduct’ and a lawyer can be penalised, without proper enquiry. Further, ‘active participation in a procession inside the Court campus and/or involvement in gherao inside the Court Hall or holding placard’, has also been made liable for punishment under Rule 14A; which is a clear attack on the right to association and assemble, protest, dissent and criticize. These democratic rights include the right to take out processions within the court campus from where lawyers function, without disturbing the proceedings in court. Furthermore, Rule 14D confers unregulated power in hands of Bench, to temporarily debar a lawyer, even before an inquiry is initiated. These rules confer irrepressible power on the High Court to proceed against an advocate, which is antithetical to the spirit of the Constitution.

Simultaneously, the Kerala High Court has banned gatherings of any kind within and outside the high court premises and ordered the state police chief to enforce the ban. The High Court’s orders are clearly infringed on the people’s right to demonstrate peacefully.

In February, 2016 during the Patiala House Court incident where a bunch of RSS backed lawyers beat up Kanhaiya Kumar without impunity in the middle of the day, while police officials stood by and witnessed the hooliganism of the Sanghi lawyers; the BCI chairman, Mr. Manan Kumar Mishra, submitted an affidavit before the Supreme Court of India stating that the decision to suspend or remove from the rolls such lawyers, would be taken only upon completion of an enquiry. Whereas, in the case of lawyers of Tamil Nadu, Telangana and Andhra Pradesh who have been agitating for their democratic rights, FIRs were lodged and en-masse suspensions were made, without any enquiry. It is clear that the BCI, which is a statutory body formulated for the primary purpose of regulating the legal practice and education, is in reality playing in the hands of the Modi Government and furthering the state’s agenda of crushing any and every democratic voice and already crumbling democratic spaces, in the country.

The latest amendments in the Madras High Court Rules have been made to intimidate and harass lawyers. Such rules act as a hindrance and interfere with the lawyers’ duties and performance of their professional activities. The decisions to ban gatherings and the crackdown of the executive and the judiciary on lawyers’ constitutionally guaranteed rights to dissent, assemble and protest is a clear indication of the ever-increasing intolerance in the country and persistent efforts of the current government to suppress dissent. Using methods like filing of FIRs, beating up lawyers by deploying the CISF and installing CCTV cameras for their constant surveillance and monitoring is an evidence of the executive and judiciary’s harassment and intimidation of lawyers.

The Indian Association of Peoples’ Lawyers calls upon all to condemn these acts by Madras High Court and BCI’s intimidation, oppression and blackmail. These acts are nothing but another attempt to crush the efforts of lawyers who are working for the fundamental rights of the people. Such actions by the State, against the lawyers and their supporters amounts to obstruction of the administration of justice, as it an attempt to deter lawyers from performing their duties.

· The suspension orders against 176 advocates passed from 2015 till date in connection with agitations, be revoked and the arrested advocates be released.

· The suspension orders and disciplinary proceedings passed by BCI and BCTP against the advocates of Tamil Nadu, who participated in various agitations during 2015-16 be withdrawn unconditionally.

· The Tamil Nadu government withdraw the pending FIRs which were filed against the lawyers participating in protests. 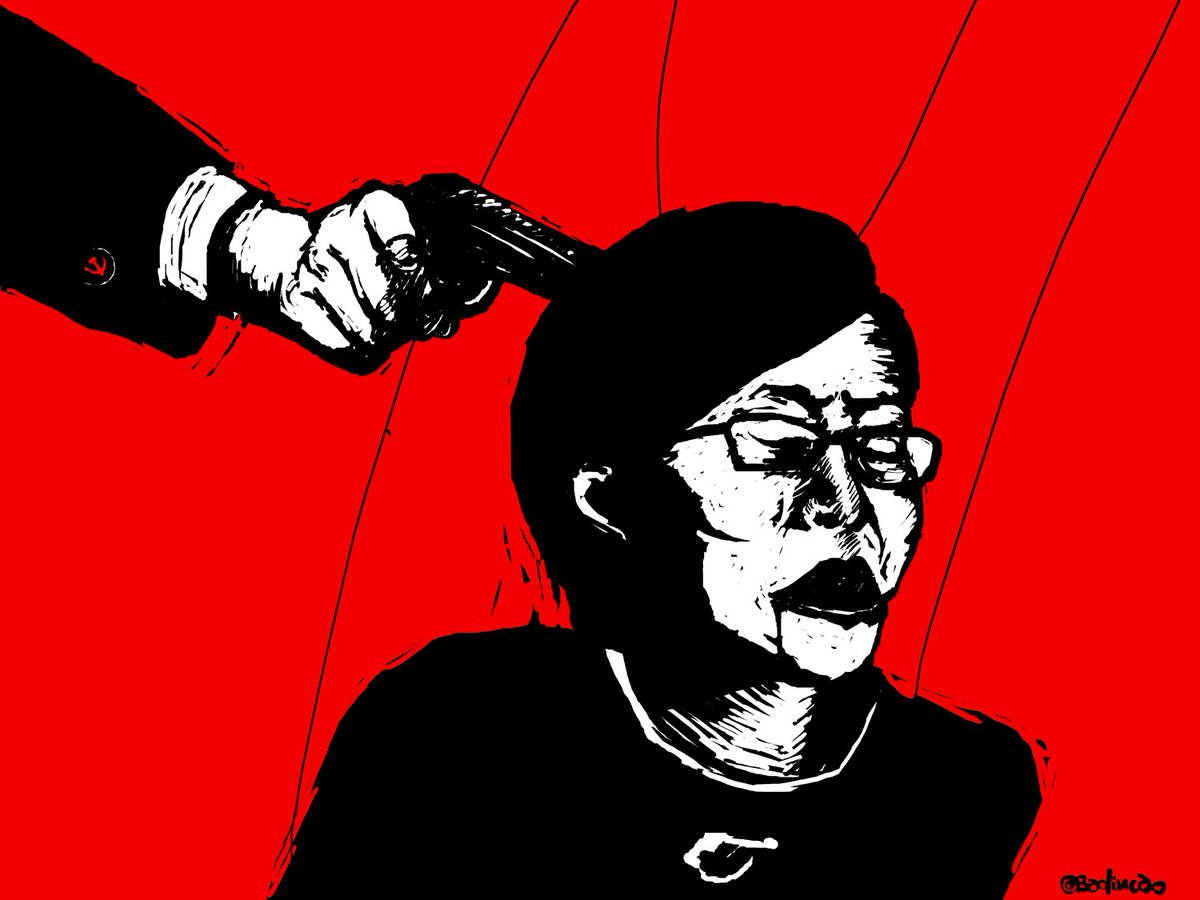 Upon her release following 12 months of detention, Wang Yu, a prominent Chinese human rights lawyer, sat down with Hong Kong’s Oriental Daily News in a videotaped interview on Monday (Aug. 1), even before reaching out to her lawyers and friends. Wang, who was arrested in a nationwide crackdown on human rights lawyers and activists in July 2015 after defending feminists and minorities in China, said in the video she was used by foreign forces to defame Beijing.

“I am a Chinese and I only accept the Chinese government’s leadership,” she said.

It was a familiar, albeit depressing site for Wang’s supporters and other human rights activists in China. Beijing systematically uses forced confessions and other tactics to discredit the party’s critics. But Wang’s video marks another chilling turn for Hong Kong, which is promised freedom of the press under the Basic Law that governs it. The city’s media appears to be just as systemically becoming a mouthpiece for Beijing, critics of the video say.

Chinese Propaganda: America Wants To Turn China Into The Next Libya

Some people see their ideal job as one that makes a difference. That’s the thinking that drove Indonesian Todung Mulya Lubis to becoming a human rights lawyer.

He’s been speaking out against his country’s death penalty. Indonesia executed four people for drug offences overnight, three of them foreigners.

Mr Lubis had previously defended Australians Andrew Chan and Myuran Sukumaran who were executed last year for drug-smuggling, in a case that grabbed international attention.

Mr Lubis shared with the BBC why he chose this challenging profession.

The trial of a Chinese activist, who is at the centre of a year-long government crackdown on legal activism, is set to begin in Tianjin.

Zhai Yanmin is among three activists and a Chinese human rights lawyer accused of “subversion of state power”.

A prominent lawyer from the same firm, Wang Yu, was released on bail on Monday after a video appeared in which she renounced her legal work.

About 300 lawyers and activists have been detained in recent months.

Observers have said the cases are politically motivated and human rights groups have called on China to release them.

On Tuesday, their family members and supporters gathered outside the Tianjin No. 2 Intermediate People’s Court along with journalists and police.

The charge of subverting state power carries a maximum penalty of life imprisonment.