A group of Hong Kong-based human rights defense lawyers issued an open letter to Chinese President Xi Jinping Friday, calling for the release of colleagues detained by government officials more than a year ago.

Known as the “709 Crackdown” of July 9, 2015, Beijing’s massive roundup of human rights lawyers and activists resulted in hundreds of arrests, dozens of detentions and, according to a group of Western legal professionals whopublished related concerns in London’s Guardian newspaper, at least 12 alleged disappearances.

Albert Ho, chairperson of the Hong Kong-based China Human Rights Lawyers Concern Group, compiled grievances about the cases resulting from last year’s roundup—and China’s legal environment in general—before having the document co-signed by 20 bar and lawyers’ associations, 10 prominent law scholars and more than 30 practicing attorneys, many of whom are also based in Hong Kong.

Turkey: This is the biggest witch-hunt in Turkey’s history 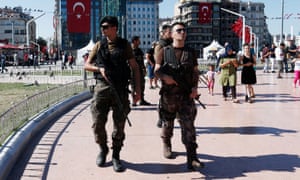 The coup attempt took place on a Friday night. By Sunday evening a list of 73 journalists to be arrested had been leaked by a pro-government social media account. My name was at the top.

Within three days, 20 news portals were inaccessible, and the licences of 24 news and radio stations cancelled. Meydan newspaper was raided, and its two editors detained. (They were released 24 hours later.) Yesterday the journalist Orhan Kemal Cengiz, also on the list, was arrested at the airport with his wife. It isalmost impossible to hear dissident voices now, in a media already largely controlled by the government. The European convention on human rights has been suspended until further notice. A cloud of fear hangs over the country.

When, this week, President Recep Tayyip Erdoğan declared a three-month state of emergency, I thought: “Nothing has changed.” As a journalist who has produced documentaries on all the past coups in the country, and has lived through the past three, I knew all too well how terrifying a regime the coup could have brought about. However, I also saw how its failure would empower Erdoğan, quickly turning him into an oppressor too.

Thousands of Judges Purged in Turkey after Failed Coup Attempt