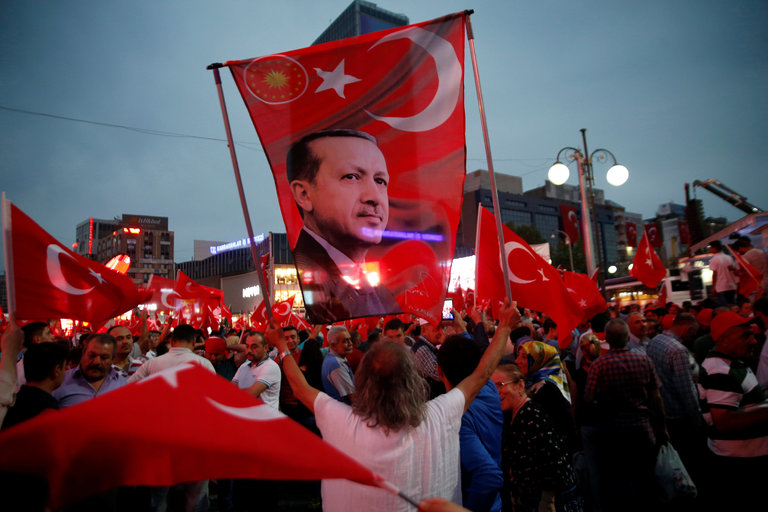 The day after Turkey’s president, Recep Tayyip Erdogan, declared a national state of emergency in the wake of a failed coup, an anxious nation awoke on Thursday to a text message from its leader, personally exhorting continued loyalty as the government moved against its enemies.

Urging his supporters to maintain their presence in public squares, where they have flocked each evening since the coup attempt failed, he wrote, “Do not abandon the heroic resistance you have put up for your country, homeland and flag.”

Even as Turkish officials were more broadly trying to assure the public on Thursday that individual freedoms would not be threatened by the state of emergency, Mr. Erdogan’s message to nationwide cellphone customers struck a more martial tone.

The concern is that Mr. Erdogan will target any and all opponents, not just those who are suspected of being followers of Mr. Gulen or of being linked to the coup.

On Thursday, many saw a strong signal that that was already happening, as a prominent and widely regarded human rights lawyer, Orhan Kemal Cengiz, was detained in Istanbul, outraging human rights activists. The exact reason for his detention was unclear, but Mr. Cengiz has been a longtime critic of Mr. Erdogan’s government.

“Orhan Kemal Cengiz is a respected human rights lawyer,” said Andrew Gardner, the Turkey researcher for Amnesty International. “He’s a columnist, and a lot of his work is about human rights issues.”

The Malaysian government should stop trying to muzzle the outspoken Malaysian Bar, Human Rights Watch said today in a letter to Prime Minister Najib Razak. The government’s proposed amendments to the Legal Profession Act, which are expected to be submitted to parliament in October 2016, would interfere with the bar’s self-regulation and independence.

“The Malaysian government’s blatant attempt to silence the country’s bar shows little concern for the immense damage this will do to the rule of law in the country,” said Phil Robertson. “The government should drop its proposed amendments so the bar remains free to choose its own leaders, act without improper government interference, and speak out on legal issues.”

Human Rights Watch said that the proposed amendments are contrary to international human rights principles and called on the government to withdraw them.

The Gambia: Verdict Due In Detained Opposition Leader’s Case

A high court judge in Banjul is today expected to deliver a ruling in the case involving Lawyer Ousainou Darboe, leader of the main opposition United Democratic Party (UDP) and over a dozen of his supporters who are being tried for taking part in an ‘unathorised’ anti-government protest.

Mr Darboe and his supporters who are currently held at Mile Two Central Prisons, are slapped with multiple criminal offences including conspiring to commit felony, unlawful assembly, riot, incitement of violence, riotously interfering with traffic, holding a procession without a license and disobeying an order to disperse from an unlawful procession.

They pleaded not guilty to the charges.

The opposition members were arrested in April after they took to the street to demand justice for their party’s organising secretary, Solo Sandeng, who was arrested two days earlier and killed in detention.

Operations conducted by the police officers in Izmir due to the attempted military coup by the Gülenist Terror Organization (FETÖ) have arrested 11 lawyers.
According to the Turkish media, the lawyers were detained during searches of 25 addresses. They are assumed to be involved in FETÖ.
The report said that during the searches in their apartments and workplaces, documents of the organization and various programs were seized.
14 more lawyers, who were decided to detain, are wanted.

Turkey: ICJ urges for respect of the rule of law during state of emergency