The Chinese Foreign Ministry said on Monday that the United States’ comments on the cases of so called “human rights lawyers” were a flagrant interference of China’s internal affairs and judicial sovereignty.

“The United States does not care about the rights of China’s 1.3 billion people, just a dozen or so people who are undergoing legal procedures,” spokesperson Lu Kang said at a daily press briefing, responding to U.S. State Department spokesperson John Kirby’s statement on some Chinese “rights lawyers” arrested one year ago.

Lu said that China is governed by rule of law. Anyone who breaks the law should be punished, regardless of his or her identity.

“The United Stats’ interference in China’s domestic affairs through the issue of human rights cannot succeed,” he said.

The Council of Bars and Law Societies of Europe (CCBE) has condemned the “709 crackdown” on Chinese lawyers, law firm staff and family members.

To mark the first anniversary of the crackdown, named 709 after the day and month it began, the CCBE, of which the Faculty is a member, has co-signed a letter from China Human Rights Lawyers Concern Group, calling on the Chinese government to uphold the rule of law and to release 36 detained human rights lawyers and defenders.

The CCBE has also written to the Chinese government, urging that all charges against the lawyers be dropped.

Egypt: “Their Freedom is Their Right” Campaign Declares “ Malek Adly” the Month Prisoner of July 2016

The campaign #Their Freedom Is Their Right to defend Arab prisoners of opinion, which is launched on 4 May 2015 by “Maharat” Foundation and the Arabic Network for Human Rights Information (ANHRI), and joined by the Arab Group members of IFEX International Network, has declared the Egyptian human rights defender Malek Adly the campaign’s prisoner of July 2016.

Malek Adly, or “Abo Bahyia” as his friends like to call him, is a young lawyer and human rights activist. He provided legal support for several political activists and demonstrators, as well as a number of professional unions and labor leaders, and the families of January 25 Revolution martyrs and wounded, in addition to those who were arrested in different incidents related to the revolution, as well as victims of military trials for civilians and torture victims.

On 5 May 2016, an arrest warrant was issued against Malek after he called upon Egyptian citizens to register powers of attorney to him to file a lawsuit against the delimitation agreement of maritime borders between Egypt and Saudi Arabia, upon which Egyptian sovereignty over its two islands “Tiran and Sinafir” is handed over to Saudi Arabia. As a result, the Public Prosecution issued an arrest warrant against him for allegedly “propagating false news”. THereafter, Malek was arrested by individuals dressed in plain clothes. He was beaten, threatened with a firearm and detained inside an unplated private vehicle with tinted windows. He was held incommunicado at an unknown place where he was interrogated about the lawsuit he filed with respect to “Tiran and Sinafir” islands.

In an attempt to defame and crackdown on Malek Adly, he was charged with “intoxication” at the fact that this accusation was leaked to some media outlets before the end of the interrogation. Malek has been held in a solitary cell, and his family members are prevented from visiting him or sending him food or clothing.

The Madras High Court on Tuesday witnessed gruesome scenes after an advocate was attacked in his own chambers by his son. Although this incident is said to have taken place due to family issues, and the profession of the victim — who is being treated for his injuries — may only be incidental, there have been several incidents over the years in which lawyers have been targeted and murdered.  Here’s a look at the cases over the past eight years.

A 42-year-old advocate was hacked to death by a five-member gang in broad daylight in Vyasarpadi when he was returning home after dropping his two children at school. The victim, T Ravi, a resident of Arumuga Pillai Street in Vasarpadi, left home around 8.30 am to drop his two children at school. “While returning, he was intercepted by a gang that came on two motorbikes on Sathyamoorthy Nagar Main Road. They parked their bikes a few metres away from the spot and approached Ravi. When the gang began assaulting him, Ravi left his scooter and attempted to run home, but the attackers gained on him near an Ambedkar statue and hacked him with sickles in full public view,” police said.

Kenya: ‘This Has Pushed a Button’: Killings in Kenya Ignite National Outcry 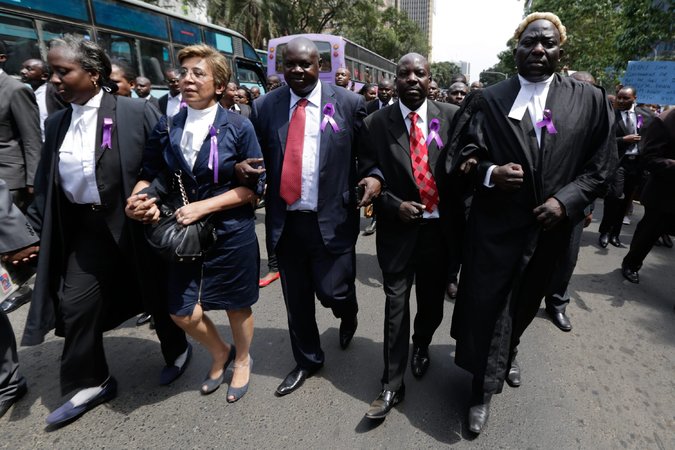 The bodies were found in horrible shape.

The skull of Willie Kimani, the lawyer, had been fractured in many places. Blunt force trauma, the coroners said.

Josphat Mwenda, the client, had blood in his chest cavity, suggesting that he had been repeatedly hit by something very heavy and very hard.

Joseph Muiruri, the taxi driver, who had the bad luck of driving the two after they left court two weeks ago, had been badly beaten as well, finished off with a length of rope.

The lawyer and the client had been working on a police abuse case, and all three were last seen in police custody. Human rights groups say it is a sign of how cheap life has become on Nairobi’s streets that police officers apparently thought the best solution to accusations against them was to kidnap and kill three people, including a well-known lawyer and a taxi driver who had nothing to do with the case.

But if so, the police miscalculated. Four officers have been arrested and the case has exploded like few others in Kenya, provoking marches, protests, the involvement of the F.B.I. and outrage that has turned into violence.

An academic friend of detained Christian human rights lawyer Li Heping calls for his release as China marks one year since its nationwide political crackdown against rights defenders.

“It is time Li Heping and his fellow rights lawyers were released,” wrote Terence Halliday, a research professor for American Bar Foundation and co-author with Sida Liu of an upcoming book “Criminal Defense in China: The Politics of Lawyers at Work,” in an article released by China Aid on Friday, July 8.

In addition, Halliday calls for the communist state to turn its back on “violence and fear, torture and disappearances” of which his Chinese friend Li is a victim. Li disappeared July 10, 2015 when the government launched its “709” clampdown against rights defenders and arrested at least 200 human rights lawyers and activists. Halliday counted 365 days since family members, lawyers, or diplomats last saw Li.

More than abandoning its current route, Halliday urges China to take on Li’s opposite path that’s characterized by “justice and equality, peace and forgiveness, constitutionalism and the rule of law.”

The Pan African Lawyers’ Union (PALU), continental umbrella association for African lawyers and other lawyers’ associations has condemned the brutal murder of their member, Mr. Willie Kimani, in Kenya.

Other associations that condemned the killing of Kimani includeLaw Society of Kenya (LSK), the East Africa Law Society and the African Bar Association ( AFBA).

Kimani, his client Mr. Josphat Mwendwa and their driver Mr. Joseph Muiruri were abducted last month after filing a complaint against the police. Their bodies were found last week.

Though four police officers have been arrested in connection with their murder,  they have not commented on the incident.

In a condolence message issued during the weekend, PALU said it was disturbed that the abductions and killings of the deceased persons took place immediately after a hearing in a judicial process in which the young advocate was defending the rights of a lay, indigent victim of Police misconduct.

“We salute the young fallen advocate for his courage and steadfastness in providing legal aid and assistance to a weak and helpless person, and standing up against the might of the Police officers. We call upon other advocates, young and old, male and female to emulate such valour and fidelity to the ethics and ideals of our noble legal profession,’’ the body.

In a statement signed by its  President, Mr. Hannibal Uwaifo, the African Bar Association ( AFBA) also condemned the assassinations.

Noting that the incident happened in the line of duty, AFBA said it  exposed the intolerance in our policy and the hazards lawyers are exposed to in the performance of their legitimate duties as recognised by the Constitution and various extant laws world wide.

“Arising from the quarterly meeting of the governing council of the association, which held in Beua, Cameroon from  July 1 to 3, this year in which the report of this cowardly acts was received, extensively discussed and resolution condemning same was unanimously carried,  the African bar Association joins the president and members of the Law society of Kenya, the family and friends of our fallen Colleague and the families of those murdered with him in demanding for answers and justice,’’ it said.