More than 140 human rights lawyers in China have endorsed a joint statement calling on Chinese authorities to immediately release lawyer Ren Quanniu, who was arrested late last week on suspicion of “picking quarrels.”

Ren, accused of having circulated rumors online about the alleged rape of his client Zhao Wei while in jail, is currently under criminal detention by police in Zhengzhou, Henan province, pending further investigation, the city’s Public Security Bureau said on a Weibo posting.

But Ren on Monday flatly rejected the accusation, insisting that he was only exercising his legitimate right to practice law, according to lawyer Chang Boyang, who initiated the petition.

“He [Ren] said those remarks on his Weibo account were indeed posted by him. But he has fabricated nothing,” Chang quoted Ren as saying after their private meeting on Monday morning. Chinese state mouthpiece the Global Times published an editorial on Monday criticising western countries’ response to its crackdown on lawyers by evoking the shootings in Dallas last week in which five police officers were killed during a protest rally.

“US police repeatedly kill black people in the streets, and black people killed five police officers in the Dallas protests, in addition to wounding several police officers – there are obviously problems with human rights and justice in the US. And the US still has the mood and energy to disrupt law and order in China – the west is so self-satisfied, it makes one marvel,” said the editorial.

“The Department of State remains deeply concerned about the continued detention in China of at least 23 defence lawyers and rights defenders and denial of access to independent legal counsel,” said the US Department of State in a press release on Saturday, the anniversary of the crackdown.

A republican representative on the US Congressional-Executive Commission on China in a press release last week said, “China’s government has taken extraordinary steps to decimate the ranks of human rights lawyers, a profession that has quickly become one of China’s most dangerous. I remain concerned that China is becoming a garrison state, with security forces empowered to lawlessly run roughshod over the rights of China’s citizens in the name of national security.”

China: Husband of Chinese legal assistant Zhao Wei questions whether she has been set free 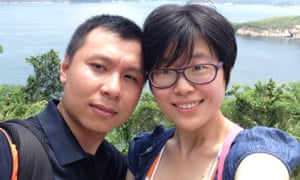 The husband of a Chinese legal assistant who was reportedly released last weekafter spending almost a year in secret detention has questioned whether she is in fact free.

Chinese police announced last Thursday they had granted bail to Zhao Wei, a 24-year-old journalism graduate who was among more than 20 people being held as part of an unprecedented crackdown on the country’s human rights lawyers.

Police said they had decided to free Zhao as a result of her “candid confession” to unspecified crimes.

The assistant appeared to confirm her release in a post on Weibo, China’s Twitter. “The afternoon sunshine feels so nice. It feels so good to breathe freely,” she wrote.

However, speaking on Monday, Zhao’s husband, You Minglei, cast doubt on official claims that she was now completely at liberty.

“I believe she is not in the detention centre and it is true that she is on bail but she is not free,” You said, adding that he had been unable to contact his wife and did not know where she was.

Human rights defenders have stepped up their pressure on President Xi Jinping to release lawyers and activists still held exactly one year after the start of a crackdown on dissenting voices in China.

Over 200 human rights lawyers and activists were picked up during the dragnet known as the “709 Crackdown”. Two dozen are still in detention, including a number who could face life imprisonment after being charged with subversion of state power.

China decries foreign organisations commenting on its human rights record, seeing it as overseas interference in a domestic issue.

Since Mr Xi came to power in 2012, China has seen increased persecution of human rights lawyers and civil society reformers and growing curbs on social gatherings, as well as more stringent control of the media and the internet.

Asmaa Aly, the wife of prominent detained rights lawyer Malek Adly, denounced once more the conditions of her husband’s imprisonment, stating that he has spent 65 consecutive days in solitary confinement.

“His health has deteriorated. The cell is 2×3 metres and bare except for two blankets,” Aly posted to Facebook Saturday, describing the confinement as a “grave” that is empty and not ventilated.

“Adly is exhausted, suffers from back pain, and sore joints in his leg. It is getting worse by the day as a result of sleeping on the floor and due to the extremely hot weather and the unbearable humidity. All our attempts to improve his detention conditions have failed,” Aly claimed.

Adly’s lawyers had previously filed a lawsuit before the administrative court, demanding that prison regulations be applied on Adly by allowing him access to his basic rights as a prisoner. On Sunday, Aly expressed her frustration that the court had scheduled 5 September as the date to look into this lawsuit.

The Law Council of Australia is urging the Department of Foreign Affairs and Trade (DFAT) to redouble its efforts with the Chinese Government, with the goal of: securing the release of the 23 lawyers and activists still in detention, ending torture and ill-treatment of those detained, removing travel bans against 39, and stopping the harassment of the families of lawyers. At least 319 lawyers, law firm staff, activists and their family members have been targeted since the ‘709’ crackdown commenced.

The Law Council is joining with the International Bar Association in marking the one year anniversary of the crackdown, expressing its continued concerns with China’s respect for the rule of law and a rules-based international order.

Many of the lawyers caught up in the crackdown, which commenced on 9 July 2015 are still missing, with no access to their family, let alone a lawyer. For example, a partner at Beijing Global Law Firm, Li Heping (李和平), has not been seen since 10 July 2015. Of further concern are reports suggesting that some of the detained have been tortured or have suffered sexual abuse.

Since the crackdown commenced, the Law Council of Australia has met with senior DFAT officials and senior advisers to the Prime Minister. The Law Council appreciates the Australian Government’s advocacy to date. In particular, a joint statement with 11 other countries at the 31st Session of the Human Rights Council on 10 March 2016 expressing concerns about China’s deteriorating human rights record, which referred to the arrests and detention of lawyers.