China: Activists Say Deaths in Custody Not Investigated in China

Chinese activists on Monday, the second anniversary of the death of Cao Shunli in detention after she was denied medical attention, condemned the impunity enjoyed by authorities as deaths in custody are not investigated.

Cao, a law graduate who began recording human rights violations in China, was arrested in September 2013 from the Beijing airport as she was leaving for Geneva to attend a UN human rights session.

“After her death, no official has been sentenced and neither has the government offered an apology. The case is not closed. We have to continue seeking accountability, direct or indirect,” Cao’s friend and fellow activist Hu Jia told EFE on Monday.

“If an investigation into what happened is not conducted, (detained lawyer) Gao Zhisheng could be the next Cao; I, myself can become another such case,” the activist asserted.

Hu, who has been under house arrest in Beijing since the last two years, could not mark the anniversary of his friend’s death with a protest as he was forced to move to Guangdong while the Chinese parliament holds its plenary session in Beijing.

Giza prosecution released lawyer Negad El-Borai on Saturday after three days in custody pending the completion of the prosecution’s investigations.

El-Borai is charged with running an organisation that hinders state progress and disturbs national security.

Upon his release, El-Borai wrote on his twitter account that he is the first rights lawyer to be charged with such a crime.

Al-Borai, director of the United Group law firm, was previously summoned for interrogation last June for submitting a bill to combat torture, along with two other judges: Assem Abd Al-Gabbar and Hisham Raouf.

In a condemning statement, 19 NGOs said they believe that these charges were an attempt at “harassing independent judges who support legislative reforms to improve the human rights situation.”

(Cast member George Clooney and his wife Amal arrive on the red carpet for the screening of the movie ‘Hail, Caesar!’, during the opening gala of the 66th Berlinale International Film Festival, in Berlin, Germany February 11, 2016.)

The couple has been advised not to travel without bodyguards and are being driven to restaurants. South Oxfordshire district councillor Paul Harrison, who has been involved in negotiations to beef up surveillance at the Clooneys’ home, said the security was for Amal rather than George. “From George’s point of view, the high-level legal work she does and the death threats she gets, it’s quite serious,” Harrison said.

The 54-year-old actor’s massive security plan for his Berkshire home has been rejected as it was thought to infringe the privacy of neighbors. The “Tomorrowland” actor had planned to set up six cameras but now it has been reduced to three. Also, the coverage of the cameras has now been reduced from 19.7 feet to 9.8 feet, which locals are reportedly happy with.

George’s concern for his 38-year-old wife is very valid in the wake of Amal’s co-counsel, Mahfooz Saeed being stabbed in the head outside his hotel in Male in September. The incident happened just before Amal Clooney visited Nasheed in the Maafushi prison. 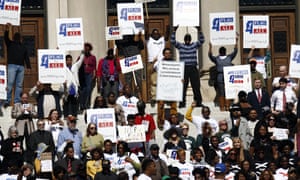 (Several hundred people gather at the Mississippi state capitol in Jackson for a rally to remove the Confederate battle emblem from the state flag in February. Photograph: Rogelio V Solis/AP)

The black civil rights lawyer who has filed a federal lawsuit to remove the Confederate battle emblem from the Mississippi state flag has been forced to employ security protection after receiving a spate of death threats through social media.

Carlos Moore, 39, an attorney from Grenada, Mississippi, has reported several threats to the FBI and local police after he was showered with vitriol following the lodging of his lawsuit on 29 February. In the most blatant verbal attack, a Facebook user purportedly from Corinth, Mississippi, who displays a handgun as his profile picture, posted: “Ok somebody shot [sic] this P.O.S before he infects us all!”

Then on Tuesday night a construction worker purportedly from Dallas invoked the assassin of Martin Luther King: “To all the people in Mississippi, Carlos Moore is trying to change your state flag. He is black and think a lot of other things mixed in too… If any of my bro’s out that way need my help to keep your flag the way it is I’m right here. Where is James Earl Ray when you need him.”