Eritrea: From online trolling to death threats – the war to defend Eritrea’s reputation 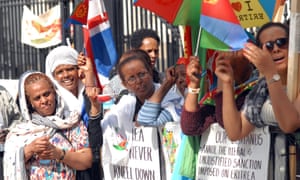 Daniel Mekonnen has been the target of online attacks from forces loyal to the Eritrean regime for over a decade, ranging from abusive emails to fully fledged death threats – one serious enough to warrant temporary police protection.

He says that the offensive started after he co-founded the Eritrean Movement for Democracy and Human Rights in 2004 – “the first diaspora-based youth movement to openly oppose the government”.

After living in exile for 12 years, the Eritrean lawyer and human rights activist has been marked as an “one of the major enemies” by the government because of his work exposing its brutality, he says.

Gulf Centre for Human Rights (GCHR) – Annual Report 2015: Human Rights Defenders in Prison and in Peril throughout the Gulf and Neighbouring Countries

In 2015, the situation for human rights defenders continued to deteriorate in the Gulf region and neighbouring countries. Those working peacefully and legitimately for the promotion and protection of human rights do so in an increasingly dangerous environment, particularly in war-torn countries such as Syria, Iraq and Yemen and the impact of those conflicts have been felt in neighbouring countries. According to our research based on documentation, missions and interviews, human rights defenders face increased harassment, intimidation, arrest, detention and torture as a result of their human rights work. Many prominent human right defenders remain in detention and are subjected to inhumane prison conditions as well as ill treatment at the hands of prison authorities. Freedom of expression continues to be seriously curtailed throughout the region and the exercise of this fundamental right has led to hundreds of arrests and judicial harassment throughout 2015. Rather than protecting human rights defenders and promoting their work at a time when their role in peacebuilding is so desperately needed, the authorities have passed new laws such as cyber-crime laws, and clamped down on on-line expression, curtailing digital rights. Despite this challenging environment human rights defenders continue their work tirelessly, refusing to be silenced through intimidation, harassment or detention.

BY JEROME A. COHEN

In China, politics continues to control law. The current leadership has rejected many of the universal legal values that China accepted — at least in principle — under communist rule in some earlier eras. Today, for example, to talk freely about constitutional reform, even within the sheltered confines of universities and academic journals, is not a safe enterprise. And discussion of judicial independence from the Communist Party at the central level is a forbidden subject.

Yet there is discreet, if passive, resistance. Legal professionals are not happy, but they dare not speak for fear of losing their jobs. Some are simply giving up.  In Beijing, reportedly, many judges have recently resigned in order to find other work, as lawyers, in business, or in academia. This dissatisfaction could become a crisis for the Chinese legal system.

When discussing domestic legal reform in China, it’s useful to keep in mind the huge strides that the contemporary Chinese legal system has made since its calamitous beginnings. The first three decades of the People’s Republic of China, from 1949 to 1979, were a legal disaster. By 1957, the decision of ruling Communist Party leader Mao Zedong to import the Soviet legal model — a socialist version of a continental, Western European  legal system — proved a failure. Three major periods of ideological turmoil — the Anti-Rightist Movement of 1957-58, the Great Leap Forward that immediately overtook it, and the Cultural Revolution that started in 1966 — demolished any attempt at a formal legal system, Soviet or otherwise. After Mao’s death in 1976, when party leader Deng Xiaoping decided to change the country’s political and economic course, China made another attempt at law reform, reviving the Soviet model. But Deng built upon it, adding Western legal elements and, to a considerable extent, opened China to universal legal values and practices.

The Killing Of Muslim Lawyers: An Unrecognized Problem

Last month a Taliban faction took responsibility for killing Samiullah Afridi, the lawyer who represented the doctor who assisted the CIA in locating Osama Bin Laden. In 2009, West Point’s Combating Terrorism Center published a report showing that al-Qaeda kills eight times more Muslims than non-Muslims. As a preponderance of terrorist attacks and related violence in the last decade have taken place in Iraq, Pakistan, Afghanistan, Syria, and Somalia, it stands to reason that Muslims are the primary victims of these attacks.

Unreported however is the systematic targeting and killing of Muslim lawyers and lawmakers in Muslim countries for their work on behalf of human rights and democratic values.

In 2014, Mohamed Mohamud Heyd was killed in Somalia; Salwa Bugaighis in Libya, and, Samira al-Nuaimy killed by Islamic State. In Pakistan, Waqar-ul-Hasan was killed in April, Rashid Rehman in May, and Gihulam Haider in October. This list is not exhaustive.

The Killing Of Muslim Lawyers: An Unrecognized Problem