Bandipora Sessions Court compound turned into battle ground when an under trial along with an accomplice assaulted his opposite counsel. Five persons including three lawyers and a civilian were injured in the feud.
The under trial identified as Noor Muhammad Gojjar of Doban Onagam in crowded court complex attacked 65-year-old Advocate Jan Muhammad Mir allegedly for some monetary issue. Advocate Jan is said to be his opposite counsel in a criminal case titled Noor Gojjar versus Zubaida under trial from last six years.
The advocate was allegedly attacked with a knife by under trail and his three accomplices. The incident led to hundreds of people gathering in court complex who also took part in the feud, witnesses told Rising Kashmir.
Five persons were injured including three lawyers, Jan Muhammad, Shafeeq Ahmed (PP) and Kaiser Bashir while accused Noor Muhammad and a civilian Ashiq Hussain were rushed to Srinagar hospital after receiving severe injuries.
… 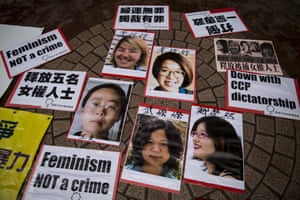 (Portraits of five activists detained by police in China after campaigning against domestic violence are seen at a protest. They were taken into custody on International Women’s Day 2015. Photograph: Tyrone Siu/Reuters)

Just a few years ago, Beijing hailed Guo Jianmei as China’s “patron of the weak”, a fearless and influential activist-lawyer whose NGO offered solace and support to thousands of disenfranchised Chinese women.

But this week, after 20 years, Guo’s organisation – the Beijing Zhongze Women’s Legal Counselling and Service Centre – abruptly announced it was closing, sending shockwaves through the country’s already embattled third sector.

Details of the group’s closure remain sketchy. Reached by telephone on Thursday, Guo, 55, declined to comment on its apparently forced demise, citing “pressure”. “It is not convenient to say [what is happening],” the veteran women’s rights activist said. “I hope you can understand.”

Human rights campaigners, NGO workers and diplomats are convinced Guo’s group is the latest victim of President Xi Jinping’s escalating clampdown on civil society. Maya Wang, a Hong Kong-based researcher for Human Rights Watch (HRW), said the authorities’ decision to shut it down was designed to send a message that only those toeing the Communist party line would now be tolerated.

On 2 February 2016, Sirikan Charoensiri received two summons to appear at the Chanasongkram Police Station on 9 February 2016 to be charged with two offences under the Criminal Code of Thailand: “giving false information regarding a criminal offence” and “refusing to comply with the order of an official”.

Such charges could result in punishment of up to two years’ imprisonment.

“The charges against Sirikan Charoensiri apparently relate to her efforts to protect the legal and human rights of her clients, students who never should have faced arrest or criminal proceedings for peacefully exercising their freedoms of expression and assembly in the first place,” said Matt Pollard of the ICJ’s Centre for the Independence of Judges and Lawyers.