China: No, Pu Zhiqiang’s Release Is Not A Victory

Pu Zhiqiang is a well-known Chinese human rights lawyer and outspoken intellectual who has taken on many precedent-setting cases defending freedom and protecting civil liberties. But his outstanding contributions in the judicial realm and his tremendous influence have made him a target of the Chinese government. On May 4, 2014, along with a dozen intellectuals, scholars, and writers, he attended a private meeting in commemoration of the June 4 Tiananmen Square incident. On May 6, he was detained by police on the suspicion of “picking quarrels.” On June 13, the Beijing police announced that he had been formally charged with “picking quarrels” and “illegally accessing citizens’ personal information.” The police then added the charges of “inciting ethnic hatred” and “inciting national splittism,” and turned the case over to the Beijing procuratorate, requesting that prosecutors charge Pu with these four crimes.

According to the accusation made public by Pu’s lawyer, Mo Shaoping, in the end Pu was charged with two crimes on the basis of “seven Weibo posts totaling over 600 characters,” namely “inciting ethnic hatred” and “picking quarrels.” The main evidence presented by prosecutors consisted of Weibo posts made by Pu between 2011 and 2015 (winnowed down from 30 posts to seven by May 2015) that criticized Chinese officials, People’s Congress representatives, and the government, as well as discussed official policies in Xinjiang, and the March 2014 Kunming train station knife attacks.

On December 14, as the trial officially commenced at the Second Intermediate Court of Beijing, Pu Zhiqiang proclaimed his innocence. Before this, his lawyers made public that Pu believed posting comments about public events and public figures on Weibo is covered by the Chinese constitutional right of each citizen to freedom of speech.

As the case went on, many legal experts wrote articles that analyzed Pu’s Weibo postings as lightly satirical and perhaps containing improper passages, but not constituting a crime. In fact, such an analysis does not require specialized legal knowledge; even non-specialists will come to the same conclusion via common sense.

It is surprising then that in their decision on December 22, the Second Intermediate Court of Beijing found Pu Zhiqiang guilty of inciting ethnic hatred and picking quarrels, and sentenced him to a three-year suspended sentence. This is not a “legal victory” as painted by the official media, but rather a tremendous disgrace of the so-called “rule of law.” 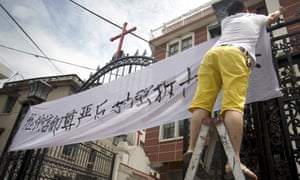 (Church members put up a banner opposing the removal of crosses at a Catholic church in China’s Zhejiang province. Photograph: Mark Schiefelbein/AP)

Zhang Kai will not make it home for Christmas.

In late August, the Christian human rights lawyer was snatched in eastern Chinaas he prepared to denounce a Communist party cross-removal campaign to the United States ambassador-at-large for religious freedom.

He has not been seen since.

“Nobody knows where he is. That is really something that is very hard,” said Yang Fenggang, a US-based academic and friend. “His family doesn’t know. His own lawyer doesn’t know … It is beyond understanding.”

The American Board of Trial Advocates sent an open letter to President Obama regarding Chinese human rights lawyer Gao Zhisheng. Though released from prison last year, Gao has disappeared. The letter urges the President to take all possible steps to assure Gao’s freedom, access to proper medical care, and that he be reunited with his family.

On behalf of the 7,500 members of ABOTA, I respectfully request that you to urge President Xi Jinping to take all possible steps to assure Gao’s freedom, access to proper medical care, and that he be reunited with his family. I ask you to put an end to the needless suffering endured by this champion of human rights.

China: He was spared prison, but Chinese lawyer Pu Zhiqiang still has ‘sword hanging over his head’ 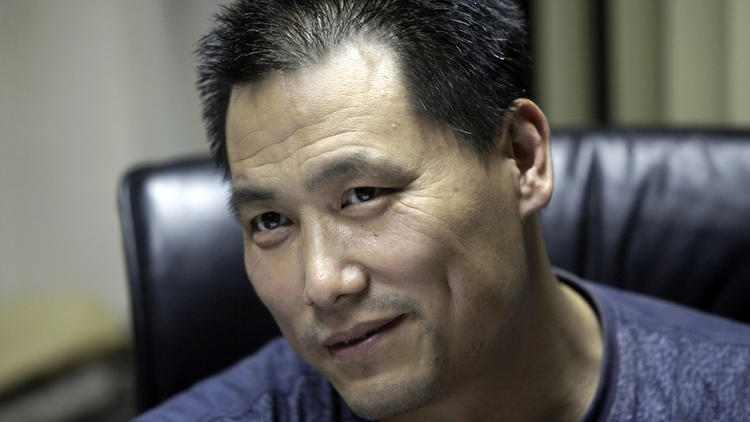 (In this 2010 file photo, Chinese attorney Pu Zhiqiang speaks during an interview at his office in Beijing. (Ng Han Guan / AP))

In 2006, supporters of a prominent Chinese human rights lawyer were spared their darkest expectations.

Although authorities found Gao Zhisheng guilty of “subversion,” they handed him a three-year “suspended sentence” with five years of probation, provisionally allowing him to serve his time at home.

Since then, Gao has been apprehended, tortured, released, apprehended again, and tortured again, even more severely. By the time he was last released, in August 2014, he was “utterly destroyed” by his time in jail, the advocacy group Freedom Now said in a statement.

Supporters of another famed Chinese human rights lawyer, Pu Zhiqiang, who on Tuesday was handed a three-year suspended sentence with three years’ probation, fear he could meet a similar fate. 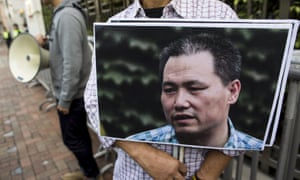 (A pro-democracy protester holds a portrait of Chinese human rights lawyer Pu Zhiqiang during a demonstration demanding his release. He was found guilty and given a suspended sentence. Photograph: Tyrone Siu/Reuters)

Nineteen months after he was seized by police during a major Communist party crackdown on dissent, Chinese free speech champion and Tiananmen survivor Pu Zhiqiang is set to be unexpectedly released after he was handed a three year suspended sentence on Tuesday morning.

“He can go home now,” his lawyer, Mo Shaoping, told the Guardian. “He is doing the paper work at the detention centre and then he can go home.”

Pu, a 50-year-old civil rights lawyer, was detained in May 2014 after attending a seminar remembering the victims of the 1989 massacre in Beijing.

Lawyers in China continue to face improper interference in their professional work and serious violations of their rights. In this context, the International Bar Association’s Human Rights Institute (IBAHRI) calls on China to implement the latest recommendations made by the United Nations Committee Against Torture (UN Committee) and to respect in full the UN Basic Principles on the Role of Lawyers.
On 9 December 2015, the UN Committee published its concluding observations on the fifth periodic report received from China. To safeguard lawyers’ rights, the UN Committee recommends that China:
1. stop sanctioning lawyers for actions taken in accordance with recognised professional duties, which should be possible without fear of prosecution;
2. ensure the prompt, thorough and impartial investigation of all the human rights violations perpetrated against lawyers, and ensure that those responsible are tried and punished in accordance with the gravity of their acts; and
3. adopt the necessary measures without delay, to ensure the development of a fully independent and self-regulating legal profession, enabling lawyers to perform all of their professional functions without intimidation, harassment or improper interference.
IBAHRI Co-Chair Ambassador (ret) Hans Corell commented: ‘Lawyers play a pivotal role in the eradication of torture. It is therefore alarming that the UN Committee finds that lawyers in China may be deterred from raising reports of torture, for fear of legal sanction.’
…

L4L and LRWC are concerned about the physical attack on, and the arrest of human rights lawyer Nguyễn Vãn Ðài. We have reason to believe that he was targeted in reprisal for his legitimate activities as a human rights defender and an attorney.

Nguyễn Vãn Ðài is the co-founder of the Vietnam Human Rights Committee and a pro- democracy activist. He has provided legal assistance to government critics and members of religious minorities. In addition, he has written extensively on human rights and has provided commentaries for BBC Vietnamese service.

(Rights lawyer Pu Zhiqiang, who has been held on questionable charges since May 2014, in an undated file photo.)

Authorities in the Chinese capital are holding four supporters of detained human rights lawyer Pu Zhiqiang after they showed up outside a Beijing court during his trial on Monday.

Police and court officials scuffled with journalists and a crowd of Pu’s supporters outside the Beijing No. 2 Intermediate People’s Court, where Pu stood trial for “incitement to racial hatred” and “picking quarrels and stirring up trouble.”

Carrying placards saying “Pu Zhiqiang is innocent,” his supporters traveled from across the country in a bid to witness his trial.