The ICJ submission on international law concerns Bulat Baityakov, practicing in Kazakhstan, convicted of slander of a judge and sentenced to a one year of restriction of liberty because of the arguments he presented in written submissions and in court, acting in his role as a lawyer.

The submission sets out relevant international human rights law and standards concerning the role of judges, the role of lawyers, and freedom of expression.

The ICJ concluded, that criminally prosecuting and convicting lawyers for presenting, in the course of legal arguments, allegations of judicial misconduct, particularly where there is a finding the allegations were presented in good faith and lawyers substantiate the allegations by evidence, clearly constitutes a serious interference with freedom of expression, with the role of lawyers in zealously defending the interests of their clients, and with the role of lawyers in seeking to ensure integrity of the judicial system.

China: The howls of China’s prisoners will haunt this royal welcome for Xi Jinping 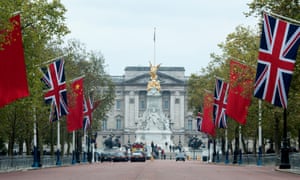 (Chinese flags fly side by side with union flags on the Mall ahead of Xi Jinping’s state visit. Photograph: Lauren Hurley/PA)

Eighteen years ago, I stood at dawn in the driving rain and watched with dread as the tanks and trucks of China’s People’s Liberation Army rolled into Hong Kong, reclaiming sovereignty over the British colony. It was clear at once that Hong Kong’s fledgling democracy was doomed. To escape Big Brother’s gaze and retain the freedom to think and write, I moved to London.

On Tuesday I will stand by the Mall and watch the Chinese president, Xi Jinping, and his wife glide towards Buckingham Palace in a state carriage. There will be no army tanks or trucks in this procession, but my feeling of dread will no doubt be deeper. Big Brother has arrived once more on British territory. This time, however, he is being welcomed by the UK government not with a frosty handshake but with open arms and shameless sycophancy.

Had Xi’s state visit been a reward for a modest improvement in China’s human rights, perhaps the pomp and ceremony would have been more palatable. But the disgraceful truth is, his visit coincides with the most severe crackdown on Chinese civil society in a generation. According to Amnesty International, at least 245 human rights lawyers and activists have been targeted since July, and at least 30 are still missing or in police custody.

Among those in secret detention is Wang Yu, a fearless defender of feminist activists and victims of rape and religious persecution. The torture inflicted on such detainees is well documented. Another human rights lawyer, Gao Zhisheng, who defended Christians and members of the Falun Gong movement, has described in horrific detail the three years he spent in solitary confinement, telling an AP journalist how, when tortured with an electric baton to his face, the sound of his screaming “was almost like a dog howling when its tail is stamped on by its master”. (Chinese President Xi Jinping speaks in the Great Hall of the People, in Beijing in 2012. (Carlos Barria/Reuters))

CHINA’S MERCILESS effort to crush dissenters and those who defend human rights not only aims to break the spirit of individuals who challenge the system. Authorities also go after family members, subjecting them to threats and punishment. In a brazen new example, China has reached across the border into Burma to nab the fleeing 16-year-old son of human rights lawyers who were detained in July.

On the night of July 9, China began a widespread crackdown on lawyers and activists known as members of the rights defense movement. These lawyers had been allowed to defend clients on a case-by-case basis, making use of China’s existing laws and the Internet to expose the plight of the abused. As we pointed out over the summer, these lawyers and activists were often permitted to function — despite the overwhelming power of the Chinese party-state and its general intolerance of dissent — because, with individual cases, they did not seem to threaten the regime. But since the crackdown began, 293 of them have been questioned by police or detained, a serious setback for the movement and an assertion that President Xi Jinping will not tolerate independent voices of any kind.

China: The Anatomy of a Crackdown: China’s Assault on its Human Rights Lawyers

When the Chinese government detained, harassed and disappeared over 280 human rights lawyers and legal activists in July 2015, the international community took notice. These simultaneous, country-wide, nighttime and early morning raids made front page news in the United States, often described as the Chinese government’s attempts to eradicate cause lawyering from its shores.

But as the Leitner Center and the Committee To Support Chinese Lawyers‘ new and seminal report Plight and Prospects: The Landscape for Cause Lawyers in Chinareveals, in some ways, these arrests and detentions are the least of the human rights lawyers’ worries. Instead, Plight and Prospects makes clear that over the past five years, the Chinese government has quietly and methodically used a more effective means to limit the space for cause lawyers: the law.