China: US Tells China It Isn’t Following Its Own Laws in Detentions

A U.S. assistant secretary of state said Friday he told Chinese officials they weren’t following their own laws in detaining lawyers and others in a wide-ranging crackdown on human rights defenders.

Tom Malinowski, assistant secretary of state for human rights, democracy and labor, led a U.S. delegation that met in Beijing with representatives from the ministries of public security, justice and foreign affairs, as well as judges and the State Council, China’s Cabinet, to discuss legal issues.

Since May, dozens have been rounded up in a crackdown on rights lawyers and social activists. Their detentions appear to be aimed at stopping any potential groundswell of opposition to the ruling Communist Party.

“There’s absolutely no question that existing laws in China have been completely thrown by the wayside in terms of the length of time these people have been detained without charges being brought,” Malinowski told reporters. “Chinese law allows for 37 days … but they’ve gone past that in a number of cases.” He said detainees also haven’t had access to their lawyers. 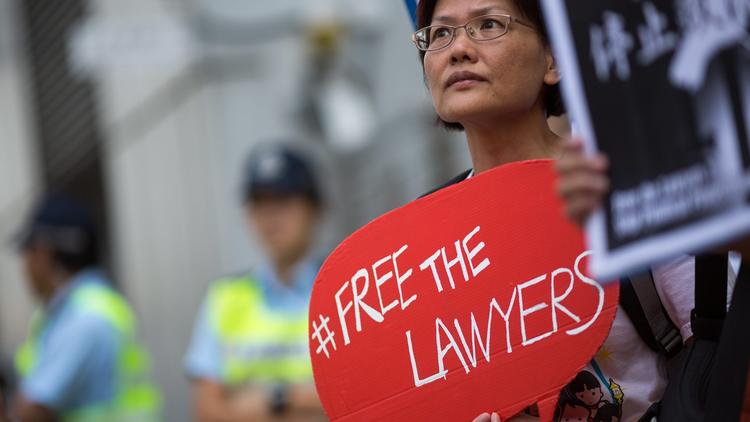 (Activists with the Hong Kong Alliance in Support of Patriotic Democratic Movements of China and China Human Rights Lawyers Concern Group demand the release of detained Chinese human rights activists and lawyers during a protest outside the China Liaison Office in Hong Kong on Oct. 9. (Jerome Favre / European Pressphoto Agency))

Chinese authorities refused to issue a passport to the son of a prominent human rights lawyer on Thursday, underscoring the ruling Communist Party’s tendency to punish the relatives of those it deems harmful to the state.

The denial came days after police detained another human rights lawyer’s 16-year-old son as he attempted to flee the country through Myanmar.

Liu Xiaoyuan, a partner at the Beijing-based Fengrui law firm, said that his son Liu Yuyang, a 21-year-old university student in the southeastern Chinese city of Nanchang, was denied a passport on Thursday afternoon, dashing his plans to attend graduate school in the U.S.